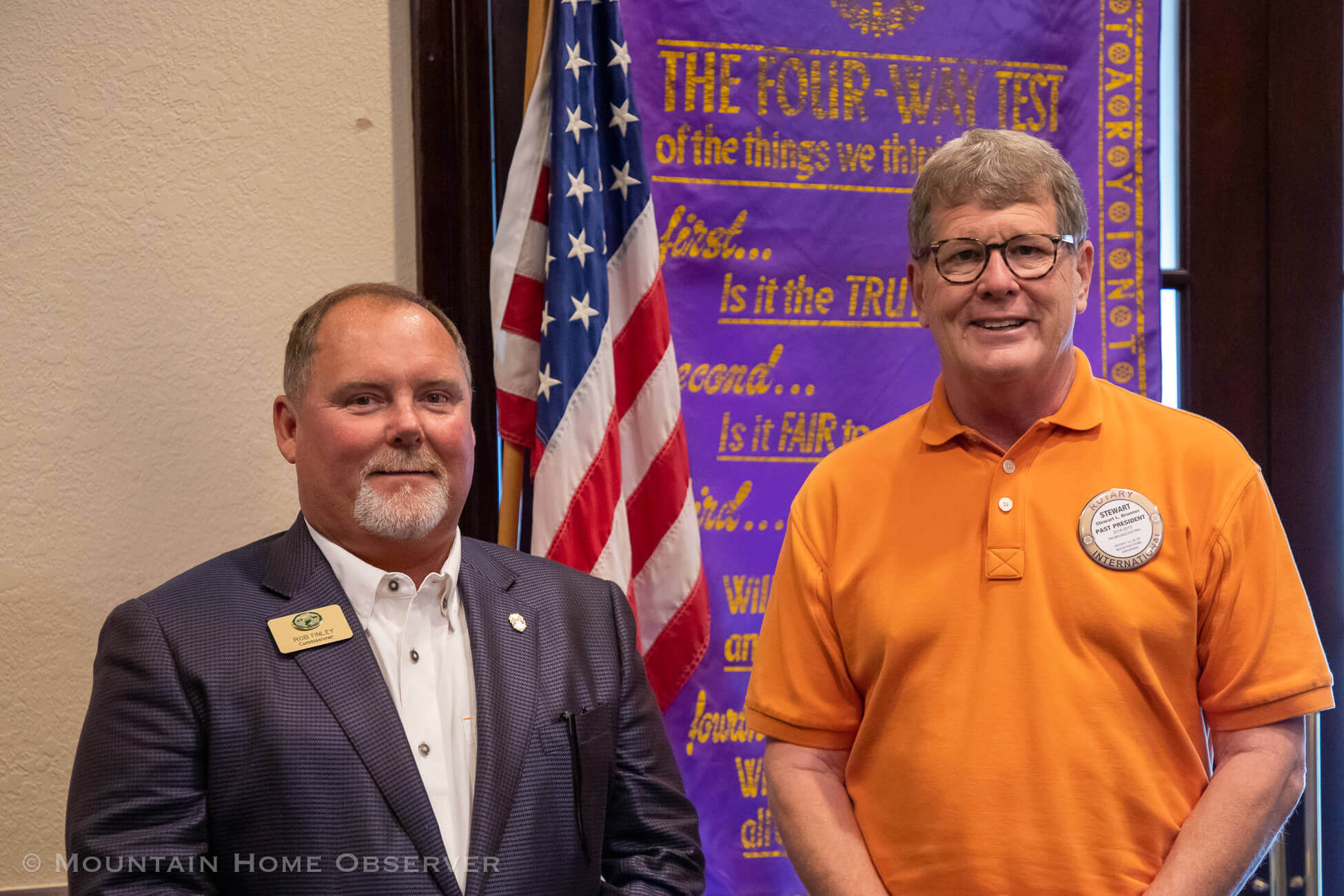 Arkansas Game and Fish Commissioner Rob Finley stopped by the Mountain Home Rotary Club Thursday afternoon to give a speech on the recent successes of Arkansas’s leading conservation agency and its plans for the future.

The commissioner, a Rotarian himself, was treated to lunch at Big Creek Golf and Country Club before his speech to the Rotary Club.

“A couple of years ago, I was appointed by Governor Hutchinson to serve on Game and Fish,” Rob Finley said. “I thought I knew a lot about Game and Fish, but you never know enough. So, it’s been very interesting. My first two years have been educational, and a lot of events have taken place. I was the first commissioner of any to be appointed during a COVID administration. So, that was enlightening.”

Appointed in 2020 by Arkansas Governor Asa Hutchinson, Finley is a U.S. Air Force veteran who worked in the banking industry and developed a credit-insurance program for financial institutions.

After some time in the industry, Finley went on to create Route 66 Warranty in Mountain Home and Cranor’s White River Lodge in Cotter. He is currently serving a seven-year term and replaces Ken Reeves of Harrison.

The Arkansas Game and Fish Commission (AGFC) currently impacts as many as 96,000 jobs throughout the state, leading to $9.7 billion in consumer spending each year. The commission employs 181 officers serving over 1 million outdoorsmen in Arkansas annually.

The AGFC is also tasked with managing over 96,000 miles of rivers and 600,000 acres of lakes throughout Arkansas. It stocks Arkansas’s waterways with over 10 million fish annually and provides habitat assistance to over 1 million acres of private land and 3.2 million acres of public land.

“That $9.7 billion of consumer spending includes fishing rods, drills, guns and ammo, and everything else that into that – boats,” Finley said. “Two point five million in wages and salaries from the outdoor industry throughout Arkansas.”

Finley and the Commission are also the United States leaders on Chronic Wasting Disease (CWD) in deer and elk throughout the country, with many states following Arkansas’s lead in managing the disease after a CWD roundtable amongst several states. The AGFC is the only wildlife agency in the country to keep a full-time wildlife veterinarian on its staff.

Chronic wasting disease (CWD) is a prion disease that affects deer, elk, reindeer, sika deer, and moose. It has been found in some areas of North America, including Canada and the United States, Norway, and South Korea. It may take over a year before an infected animal develops symptoms, including drastic weight loss (wasting), stumbling, listlessness, and other neurologic symptoms. CWD can affect animals of all ages; some infected animals may die without developing the disease. CWD is fatal to animals, and there are no treatments or vaccines.

To date, no human has been infected with CWD. Finley said that hunters should test their meat for infections. The AGFC oversees a yearly whitetail rebound of over 200,000 deer per year.

Baxter County has been affected by CWD over the past few years after an outbreak was discovered in Marion County, leading to restrictions on feeding throughout the year.

“We wrote a pretty extensive plan that many other states have now adopted on how to manage that. It’s not something you’re probably ever going to get rid over,” Finley said.

The AGFC has seen a boom in revenue following the COVID pandemic after people took up an interest in spending more time outside in the great outdoors. From 2014 to 2019, the AGFC saw a 15% drop in hunting license sales and an 18% drop in licenses for anglers. Federal aid to the agency also dropped by 16% during that time frame.

That decline has been reversed, with more people taking to Arkansas’s lakes, rivers, and public land than ever before. While hunters are enjoying the AGFC’s 3.2 million acres of public land, Finley said the true money maker for the state and the agency lies in its trout industry, which has dwarfed the duck hunting industry, another popular state money maker, nearly 2-1.

Last year, the AGFC issued 105,458 trout stamps that helped push the $180 million industry to new heights. Roughly five percent of trout fishing is done in Southern Arkansas, with the remaining 95% being conducted along the Norfork River and the White River.

“The rest of that, roughly $150 million, is in the north region of the White River and the Norfork River. That’s important for us,” Finley said.

For the future, Finley said the AGFC was focused on moving its Mountain Home field office to its new two-acre lot behind Duane Hada’s art gallery, as well as focusing on the completion of its renovation of Jim Hinkle Spring River Fish Hatchery.

The hatchery, which was flooded in 2008, has been unable to stock trout due to the introduction of trout disease to its water tanks from the flood. The $2.8 million renovation, which is expected to be done by next April, will get the hatchery fully operational again.

The hatchery was stocking Arkansas waterways with as much as 800,000 trout per year. It is the only state-owned hatchery that is fully devoted to trout.