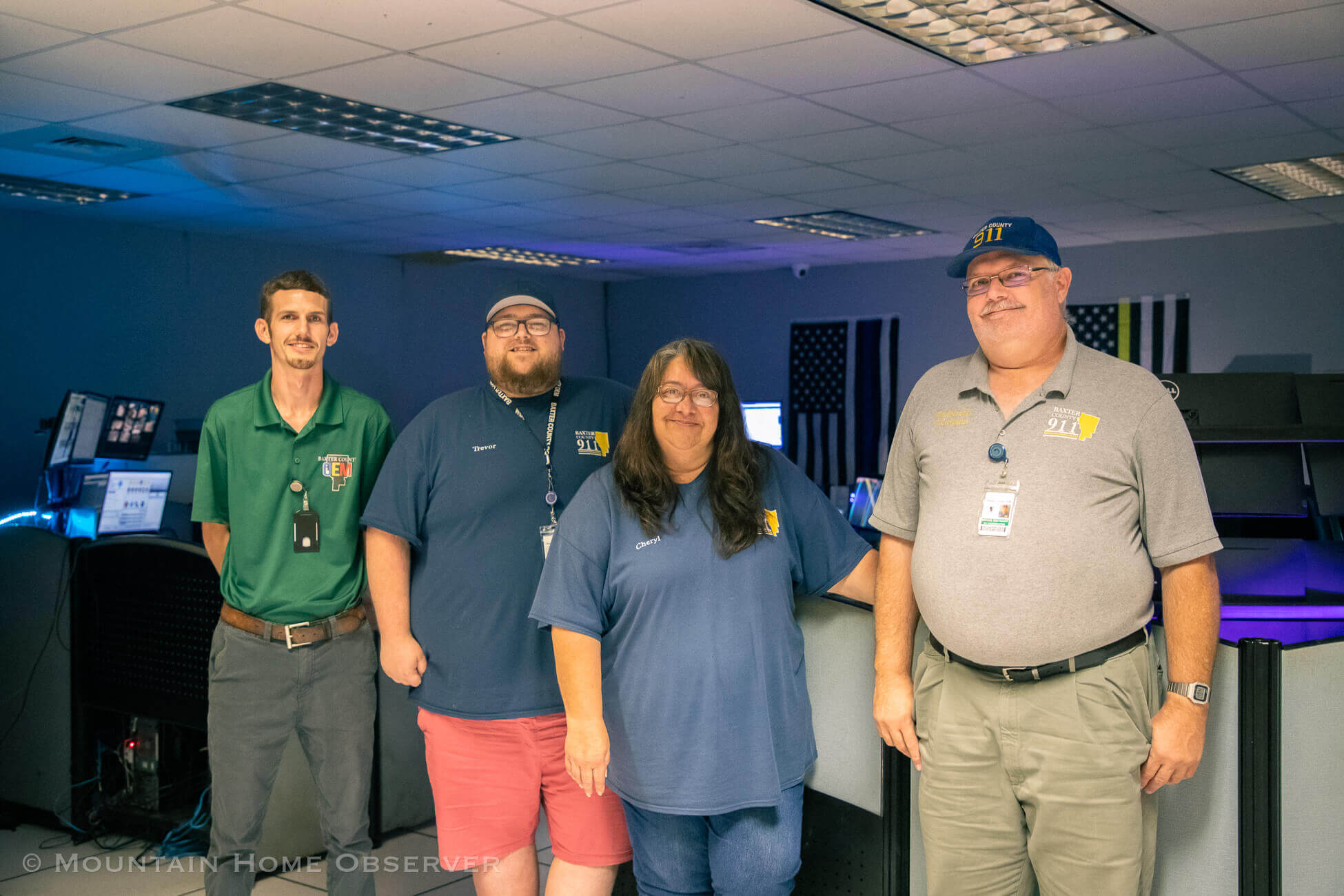 The crew at Baxter County’s Emergency Enhanced 911 Operations Center have a difficult job.

Each day, people like Mike Shetrompf, 911 Coordinator for the Emergency Enhanced 911 Operations Center, get up and pack themselves into a dimly lit room filled with telephones and computer monitors.

Their job seems easy on the surface, answer phone calls coming into the 911 system, but it’s much more difficult than that.

Every day these 911 dispatchers are confronted with some of the worst that society has to offer. These employees face things like child abuse, suicides, murder, destructive fires, car wrecks, and medical emergencies that often result in the loss of a life.

And in a tight knit community like Baxter County, where everyone knows everyone, it can often mean hearing about a friend, family member, or coworker.

“They always know how a call begins, and as soon as first responders get on scene, they never know what happens from that point forward,” Shetrompf said. “It doesn’t sound like it would, but that stresses the heck out of you because you don’t know what the outcome was.”

Baxter County’s Emergency Enhanced 911 Operations Center was founded on April 15, 1996, and has seen a steady growth in call volume and staff since.

Baxter County Sheriff John Montgomery, who assisted in the creation of the Baxter County’s 911 Center as a member of the 911 Advisory Board, established his own dispatch tower for his deputies after taking office in 2005. That dispatch tower is home to two full time dispatchers who take calls for the Sheriff’s Office.

“It used to be upstairs in the police department,” Shetrompf said. “I think they built this building in like 98 or 99, because they built onto the PD. They used to have a little gas station sitting out here in our parking lot.”

Becoming a 911 dispatcher is a three-month process, in which new trainees are taught the phonetic alphabet, how to work various radio and computer equipment, and how to take phone calls.

Trainees are also required to take ride alongs with various first responders to learn how each county department operates and are required to take a legal course through the Arkansas Crime Information Center.

“Every time they answer the phone, it’s a potential lawsuit. Every single time,” Shetrompf said.

Working as a 911 dispatcher is a stressful job, with dispatchers being required to work 15, 12 hours shifts a month. Dispatchers can also find themselves working overtime during bad weather conditions or major disasters.

Shetrompf said the COVID-19 pandemic also saw the centers workload increase as call after call began to pour in. Since the beginning of the pandemic, the center has seen a yearly increase of roughly 5,000 additional calls. Last year alone, saw an additional 7,000 calls above what dispatchers usually see.

Altogether, the county’s dispatchers answered 48,000 calls last year, or a little more than one phone call per citizen living in Baxter County.

To make matters worse, the 911 center had to deal with its own COVID outbreaks, that kept many dispatchers out of work as they recovered.

“Some of the dispatchers that were sick, knew we were so shorthanded that they’d call me and be like, can I come to work?” Shetrompf said.

Pay for dispatchers starts at $14.88 an hour, with most making around $16 an hour after starting. Many of the county’s dispatchers are experienced hands and have also risen to new positions over the years.

“I was just a regular old dispatcher,” Stults said.

And while the county has some experienced hands, that doesn’t mean that new dispatchers don’t get their chance to shine.

During the Tracy Ferry Marina fire, new dispatchers Tony Laine and Shaylene Astry, along with Mountain Home PD dispatcher Abby Belding, stepped up to the plate to handle what would become one of the most expensive fires in the history of the county.

“Nobody ever had anything like that before in this county,” Shetrompf said. “We had dispatchers in the room that were both fairly new. One’s been here about a year, and the other one was only here for about five months. And they did an amazing job. That needs to get out there for people, because I’ll just brag on them every day for that.”

For the first time in its history, the Baxter County Emergency Enhanced 911 Operations Center is now fully funded by the State. In previous years, the county was forced to use a portion of its general funds to keep the center going, but that changed with the passage of the Arkansas Comprehensive Emergency Act Plan in 2019. The center was originally supposed to be funded by phone fees during the establishment of 911 back in the 1980s, but that plan was never followed through.

Baxter County Judge Mickey Pendergrass is credited as one of the county judges that pushed for new legislation to fully fund Arkansas’s 911 centers.

“Our judge was really influential in pushing for that for the state. He was out there banging the state pretty hard on that one,” Shetrompf said.

Baxter County’s 911 Center is currently going through a modernization period to upgrade its computer and radio equipment. The county’s most recent upgrade came in the form of its Mobile Command Unit and Mevo Kit, which allows dispatchers to set up a mobile 911 call center through a technique called geofencing.

This new technology will allow the center to have a backup in case of a natural disaster, as well as cover major events like the Baxter County Fair, without putting an increased burden on dispatchers on watch at the county’s main call center.

Other upgrades to the center include the installation of fiber internet, as well as the addition of new equipment and software to help prevent against cyber-attacks.

“We just bought it, and we’re getting it set up for the fair,” David Stults said. “What it allows us to do is take the 911 center on the go. We can take that box over there, which is called a Mevo Kit, and we can dispatch out of that command unit anywhere we want to set up.”