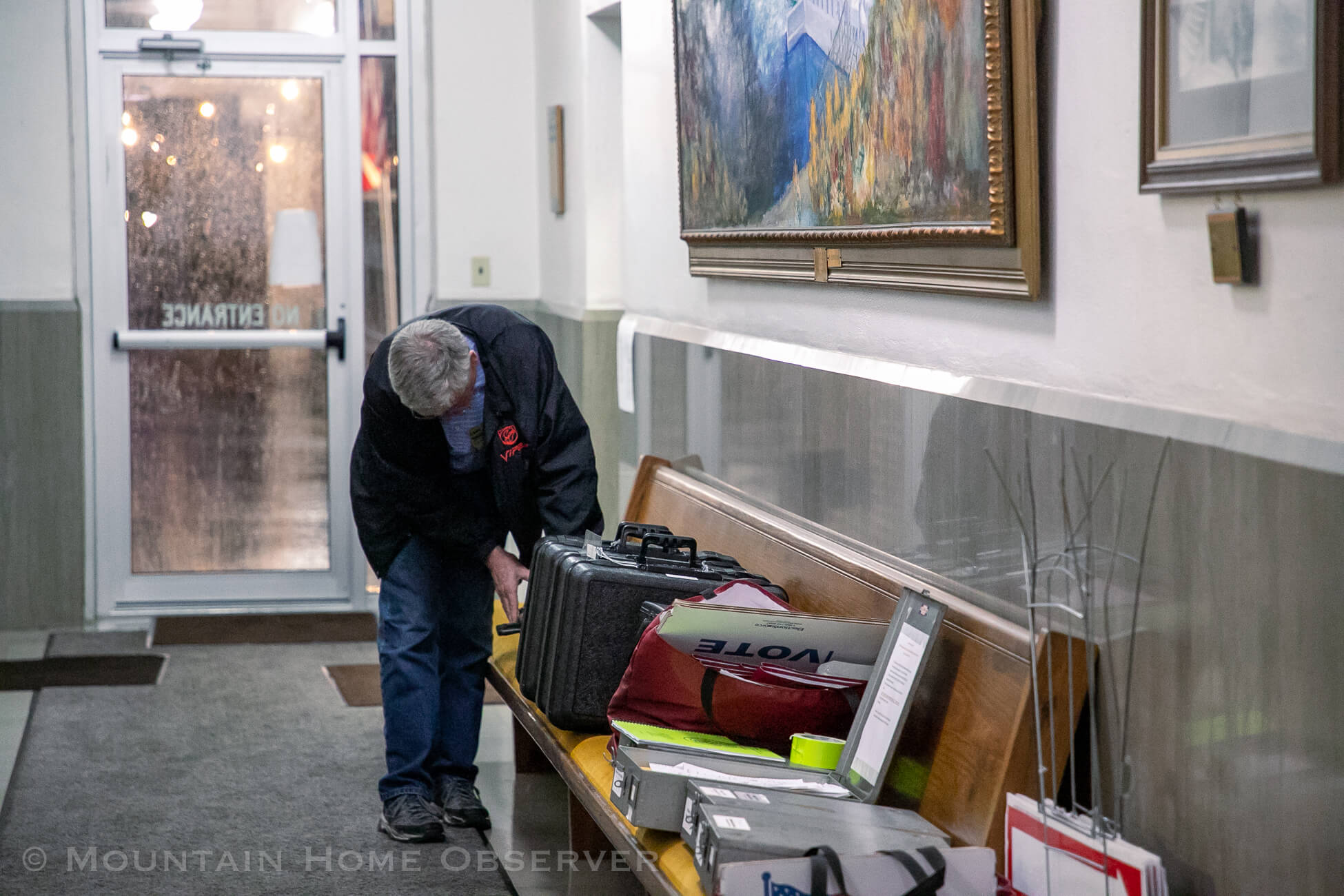 Editor’s Note: Because of the events that occurred during Baxter County’s primary election Tuesday evening, I have elected to make this article free to the public. — Chris Fulton / Owner

A series of delays and major mishaps plagued the Baxter County Election Commission after the polls closed at 7:30 p.m. on Tuesday evening as candidates eagerly awaited to learn the unofficial results for their primary races.

Mishaps included a lost thumb drive containing a count of the votes from Midway’s polling location, chain of custody issues, misplaced summary tapes, and two unsealed tabulation machines that were used in polling locations throughout the day.

“You’re barking up the wrong tree there. We have the ballots,” said Baxter County Election Commissioner Bob Bodenhamer when questioned on Midway’s missing thumb drive.

The evening started with a technical delay after several of the thumb drives containing the election results from each precinct began to give officials an error after inserting them into the computer used for tallying all of the county’s votes.

Members of the commission told the crowd in attendance that the computer and tabulation machines were not connected to the internet.

During what was meant to be their final tally, Election Commissioner Judy Garner noticed that they were missing Midway’s results. A hunt for Midway’s thumb drive began.

As election officials began looking for the thumb drive, Garner called Midway’s poll judge and confirmed that the thumb drive had been delivered to the Baxter County Courthouse.

“She said she had one in a silver box, and she said she gave the thumb drive and the tape to a lady down there,” said Garner.

The poll judge’s name was not given to the press or the crowd after requests. Commissioners were unclear on which woman took the thumb drive after it allegedly arrived at the courthouse.

Commissioners then made the decision to rescan Midway’s ballots through a reset tabulation machine at the courthouse and load the results on a new thumb drive.

The Observer confirmed that the machine had been reset and contained no election data on it. Election equipment and materials were left in the lobby of the courthouse and were mostly unattended throughout the night.

After it was determined that the thumb drive was indeed missing, an unknown person called Arkansas’s State Election Commission about what was happening in Baxter County.

At some point, Bodenhamer received word of the call and spoke to a member of the State Commission himself before implying that members of the Observer had made the call.

The Observer confirmed that the results of the rescan matched the original summary tape for Midway’s polling location.

Not the only problems

Tuesday night’s events were not the only problems that have plagued the Baxter County Election Commission in this year’s primary race.

The discrepancy resulted in the Republican ballot for precinct 6-2-1 showing the House District 3 race between Stetson Painter and Tom Bryant instead of the correct House District 4 race between incumbent Jack Fortner and his challenger, Bruce Emerson.

The removed ballots were placed into a sealed box that has yet to be opened so that those affected ballots can be hand-counted. The incorrect district race will be struck from the ballot during the hand count.

To ensure election integrity and fairness, the commission has also reached out to affected voters to offer them the opportunity to cast a single vote for the House District 4 race.

Baxter County uses a chart sheet that contains all of the information surrounding each race, including which districts those races are in, to program its tabulation machines.  While creating this chart sheet for the election commission, an employee in the Clerk’s Office incorrectly placed a three instead of a four in the House District column on the 6-2-1 precinct, resulting in the county’s tabulation machines being incorrectly programmed. House District 4 is the correct district for precinct 6-2-1.

Baxter County has seen some major shifts in its House District lines over the past few years, which may have caused confusion and led to the error. The county currently has 43 separate precincts covering various districts with races and positions that often overlap with each other.

And while Commissioners may have fixed that problem, more issues arose on election day after poll watchers noticed that tabulation machines in both the Twin Lakes Plaza and Wesley United Methodist Church polls were unsealed.

Sharon Caster, a concerned citizen who has been watching the polls intently, noticed the unsealed tabulation machine in Cotter’s polling location and notified the Poll Judge for that location. The machine was then correctly sealed.

At Twin Lakes Plaza, Tom Zulker, another poll watcher, noticed that voting center’s machine was unsealed. When he approached election workers about the machine, he was told “it’s no big deal, we’ll see if anyone tries to take anything.”

The Twin Lakes Plaza machine was resealed after being opened last week. It is unclear how the machine was unsealed again on election day.

Baxter County still has a ways to go before its election results become official. Around 40 or so provisional ballots need to be addressed before they are counted.

The Baxter County Election Commission said they would be reaching out to these voters to either fix the issue or verify people’s IDs. Commissioner Gary Smith said he would be contacting the State Commission for guidance on an issue relating to a birthdate on one ballot.

The big win of the night goes to Baxter County Sheriff John Montgomery who will be serving his last term as Sheriff after winning in a landslide against his opponents Henry Campfield and John Pate.

“I’m very humbled by this outpouring of support by the voters,” said Sheriff Montgomery after receiving the news of his victory. “This is my ninth election and again they’ve put their trust in me for 18 years. And so again, very humbled and I appreciate all the voters that came out and the support I’ve received.”

In other county election news, Brian Plumlee and Kevin Litty are officially headed to a runoff election after Plumlee fell just short of securing enough votes to put him over the 50% line. The news of the runoff marks the first time that an endorsed candidate of the Ozark Patriots, a growing political group in Baxter County, might win an election.

Here are the rest of Tuesday night’s votes. These results only reflect elections here in Baxter County. The results for State House District 3 and 4, which partially reside in Baxter County, will be added after votes are finished being tallied.

SCHOOL BOARD (BAXTER COUNTY RESULTS ONLY)

As elections near, MHSB gets update on high school remodel