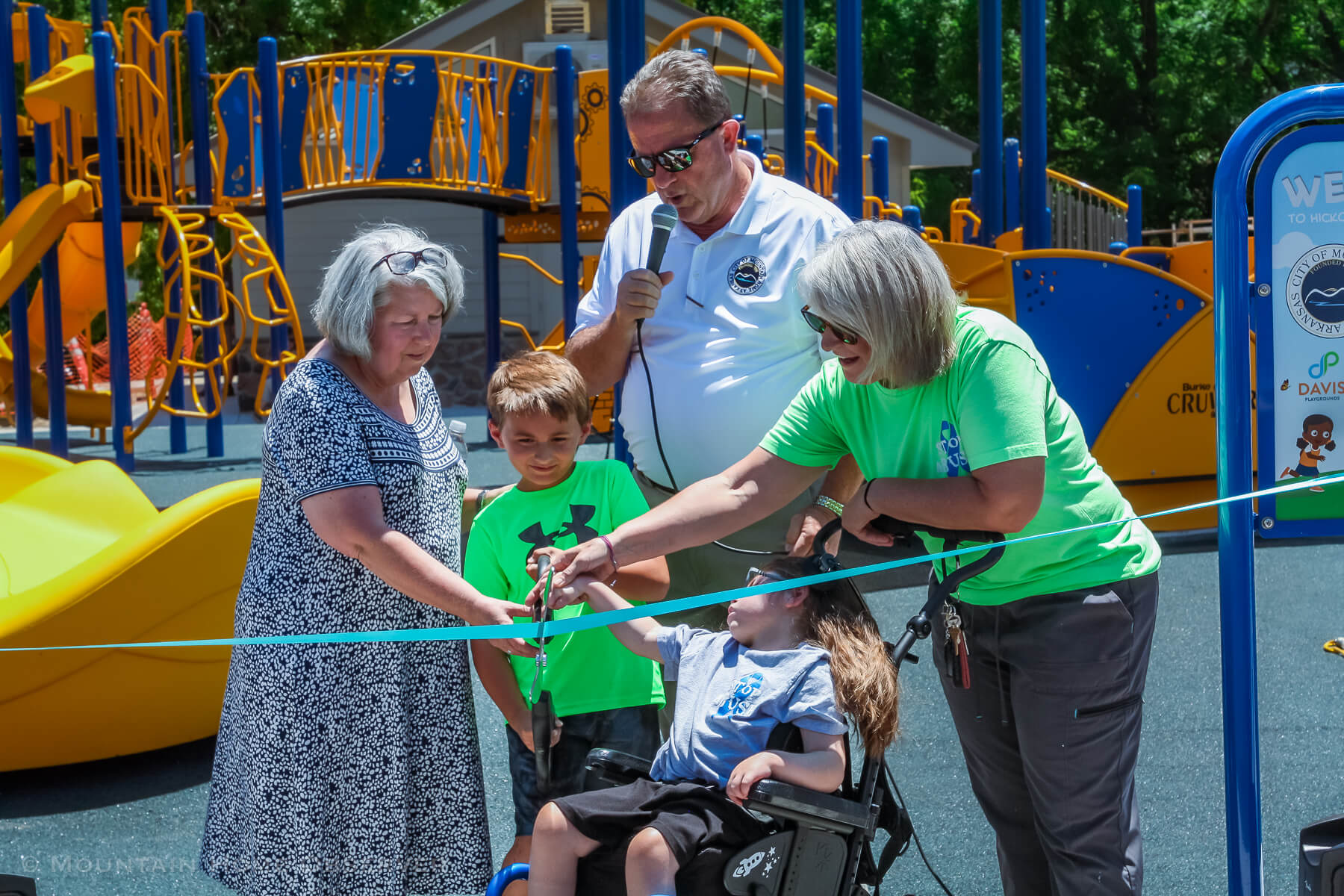 Blast from the Past: It’s time to play! Mountain Home’s all inclusive playground opens to the public

To help with christening Mountain Home’s new playground, Adams was joined by Debrah and Malachi Wiggins of Team Malachi, Donna Hopkins, and her grandson Kameron Partee.

After the ribbon-cutting, both Malachi and Kameron led a group of children in breaking in Mountain Home’s new playground equipment.

“When we were trying to get the project started, we had several town hall meetings,” said Adams in a speech at Monday’s ribbon-cutting ceremony. “We had one at city council one night where we were talking about this project. There’s a lady sitting in the front row, who I know, Donna Hopkins, and I really didn’t know what she was there to talk about. And she got up and made a plea to the city council like I’ve never heard before of why we needed something like this for children with special needs. And that convinced me that night, Donna, that we had to do this right here. This is huge for our community to have this.”

Construction crews have been working on completing several park projects around Mountain Home over the past few months. Most recently, Adams was able to re-open Keller Park after workers wrapped up a series of major renovations on the park’s ball fields.

At Hickory Park, crews have installed a new ADA-compliant parking lot and a new retainer wall for the park’s new playground. The playground is complete and features a wheelchair-accessible jungle gym, modified see-saws, a music station, swings, barrier-free restrooms, and a barrier-free parking lot.

While the playground is open to the public, some work is still unfinished, and crews will be working on completing the landscaping surrounding the playground and some additional clean-up.

“This is a good feeling, to see little kids who need this out there playing,” Adams said. “This is something that we’ve been working on getting to today. The playground is 100%, but we got some landscaping and tidying up to do.”

In Oct. of last year, the mayor and city officials traveled to Little Rock to propose their $250,000 vision, the maximum amount, for Hickory Park to the Department of Parks, Heritage, and Tourism. The department awarded Mountain Home the most money possible based on current funding levels.

The decision to try and build the park came about after Adams met with several groups in town who wanted to bring attention to the need for an ADA-compliant park for children with special needs. After the meeting, Adams was fully onboard and began seeking ways to complete the project.

“In 2019, Bob Knight told me, you got to go to this state parks and recreation program,” Adams said on overhauling Mountain Home’s parks. “They got all sorts of money for outdoor grants. And so we did. In 20, we got a $98,000 grant from that organization to work with at Clysta Willett Park. I told him, if we got that grant, we would do some improvements at that park, and we’d come back and ask people to invest in themselves. We did with that three quarter cents sales tax.”

While Adams may have worked out the finer details in the creation of Mountain Home’s new playground, he made it clear in his speech that Debrah Wiggins and Donna Hopkins did most of the heavy lifting.

While Hopkin’s impassioned speech sealed the deal to city council, Debrah Wiggins’s speech to the Department of Parks, Heritage, and Tourism secured the state funding needed to get the job done.

“You get five minutes to take in front of that committee,” Adams said. “And when we got done, I used about three and a half. Debbie used a minute and a half. And they were telling me later, you should have gave the lady the whole five minutes because this lady right here did a heck of a job in her presentation to that committee that day.”

Wiggins’s journey into fighting for the rights of special needs children began with the adoption of her ninth son, Malachi.

Born a perfectly healthy baby, Malachi was severely beaten by his birth parents during the first few weeks of his life, resulting in a permanent brain injury that left him needing special love and care for the rest of his life.

Wiggins answered that call when Malachi was only 10 weeks old and has cared for him since. She officially adopted him at the age of two. Because of the injury inflicted upon him by his birth parents, Malachi suffers from daily seizures, eats his meals from a tube, and is wheelchair-bound.

Today, Malachi is a happy child despite his injury and was able to enjoy several of the park’s wheelchair-accessible features.

“We try to focus on giving him the best experience in life that he has. He’s been all over with us. We treat him like a normal kid,” said Debrah Wiggins

Malachi was joined Kameron Partee in cutting today’s ribbon. Partee was injured in a lawn mower accident in 2017 and has been in and out of wheelchairs ever since. Partee has also received skin graphs and is currently undergoing guided growth to ensure that his knee recovers properly as he continues to grow as a young boy.

Donna Hopkins, Partee’s grandmother, said Partee would receive a knee replacement in the future if enough bone was left to do the replacement.

And while Partee has been in and out of wheelchairs since his accident, most recently for a broken femur in December, he was out and about today playing without assistance during the ribbon-cutting ceremony.

“He broke his femur in December, so we were in a wheelchair for three more months. And we were worried that he might not be where he could play today, but he’s healed well this time,” said Donna Hopkins.