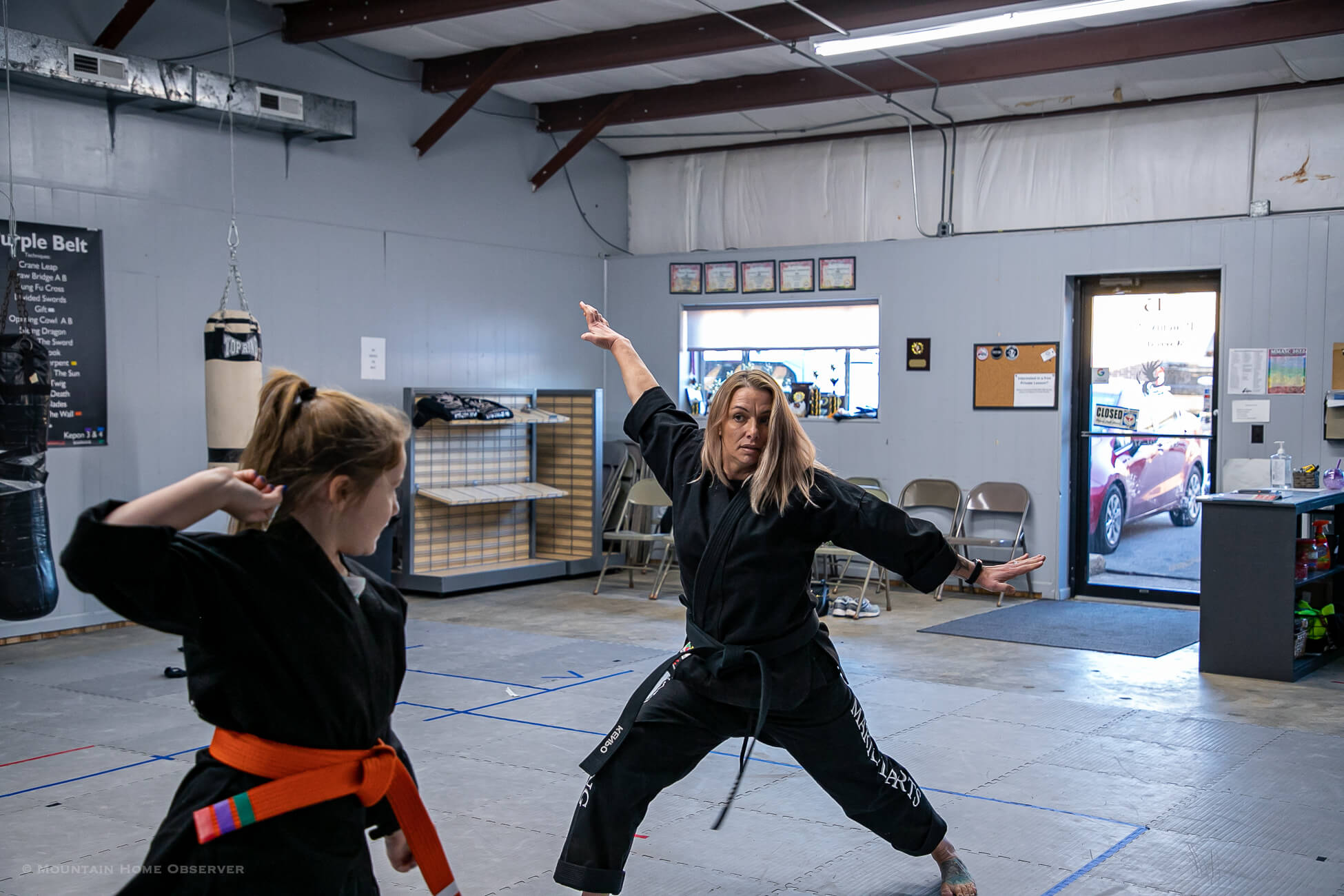 Yet if you were to stand in her small dojo in Mountain Home today, you would not be able to guess her past life as an addict. Like the phoenix she named her dojo after, Newton rose out of the ashes of her past life and found her footing in the world again.

A smiling instructor filled with laughter, Newton spends her nights teaching her students discipline, self-confidence, and her father’s favorite Kenpo techniques that she learned as a young child.

Her dojo is small, filled with leftover equipment from her father’s lifelong career as a karate instructor. Parents and students shuffle in and out of the space as each class begins for the evening.

Her father’s banner hangs in the center of the room—a display of her martial arts lineage.

“I had a space to fill,” said Devin Newton. “The little odd jobs and stuff around here weren’t fulfilling. And my old landlord approached me because he has 10 kids, asked me if I’d like to teach again. I didn’t even know that I wanted to. I just broke down and started balling in his office. Things evolved from there.”

Her father, Grand Master Curtis Futch, was a 10th-degree black belt with over 35 years of experience in teaching before his passing in 2014. A Vietnam Veteran, Futch was inducted into the Martial Arts Hall of Fame in Orlando, Florida, as Grand Master of the Year.

“I studied with my father for years and then all of his friends and martial arts buddies,” Newton said. “I was inducted into the World Head Sokeship Council’s Hall of Fame. I got my first black belt in 1995, and last year, I received my seventh degree.”

While Newton spent her youth under the tutelage of her father and had a promising martial arts career, her life began to change in 2004, after she began going through her “party stage.”

Over the next 10 years, she would abandon karate for a life of addiction. She would be kidnapped and trafficked through several states, ending up in California and then Oregon.

“So I stepped off into the world of drug addiction, and I really hit rock bottom about 10 years ago,” Newton said. “I was human trafficked, homeless, kidnapped by a gang—a lot of what not to do. That’s something I try to teach my kids in here. I know a lot about what not to do, and they can know not to follow in my footsteps. I’m an open book when it comes to stuff like this.”

After reaching rock bottom and finding herself in prison multiple times, she became serious about changing her life, eventually putting herself through a rehab facility in California after fleeing a prison sentence in Arkansas.

“That was five years ago and I had the most amazing experience,” she said. “And I came home and turned myself in. I was facing 10 years. Instead, I got drug court, graduated with flying colors, and moved here.”

Her dojo, Phoenix Rising Martial Arts, offers students of all ages the chance to hit the mat, have some fun and put their skills to the test. She is joined by Riannon Casey, a former student of her father, and Katelynn Immesoto, a young teenager seeking to be an instructor, in teaching classes.

“We’re all female taught,” Newton said. “I also have Miss Riannon. She’s a second-degree blackbelt and is also a student of my father. We do Monday through Thursday, and then we have some Fridays. We have a fight club and free-for-all classes. Anybody in a program for recovery gets an automatic free month for them and anybody in their family.”

Newton said she plans on expanding her dojo in the future. She is currently working on purchasing a van to begin offering an after-school program for children.

She also said she hopes to start a summer program for both parents and students, and has begun offering daytime classes for parents who home-school their children.

“They’ve been at school all day, and they need to find something constructive to get themselves into,” she said. “And if you’re going to pay for after-school care, you might as well have karate with it too.”

Phoenix Rising Martial Arts will be hosting a special seminar featuring Supreme Grand Master Richard Osborn, Sr., this Saturday at 10 a.m. Osborn is a 10th-degree black belt in Tae Kwon Do and is the first martial artist to be inducted into the Missouri Sports Hall of Fame.

The dojo will also be hosting a pizza party after the event.

“Everyone starts somewhere,” Newton said. “Everybody that walks through that door ends up as friends, and we help each other with each others kids and go to outings with each other that are completely un-martial arts-related.”