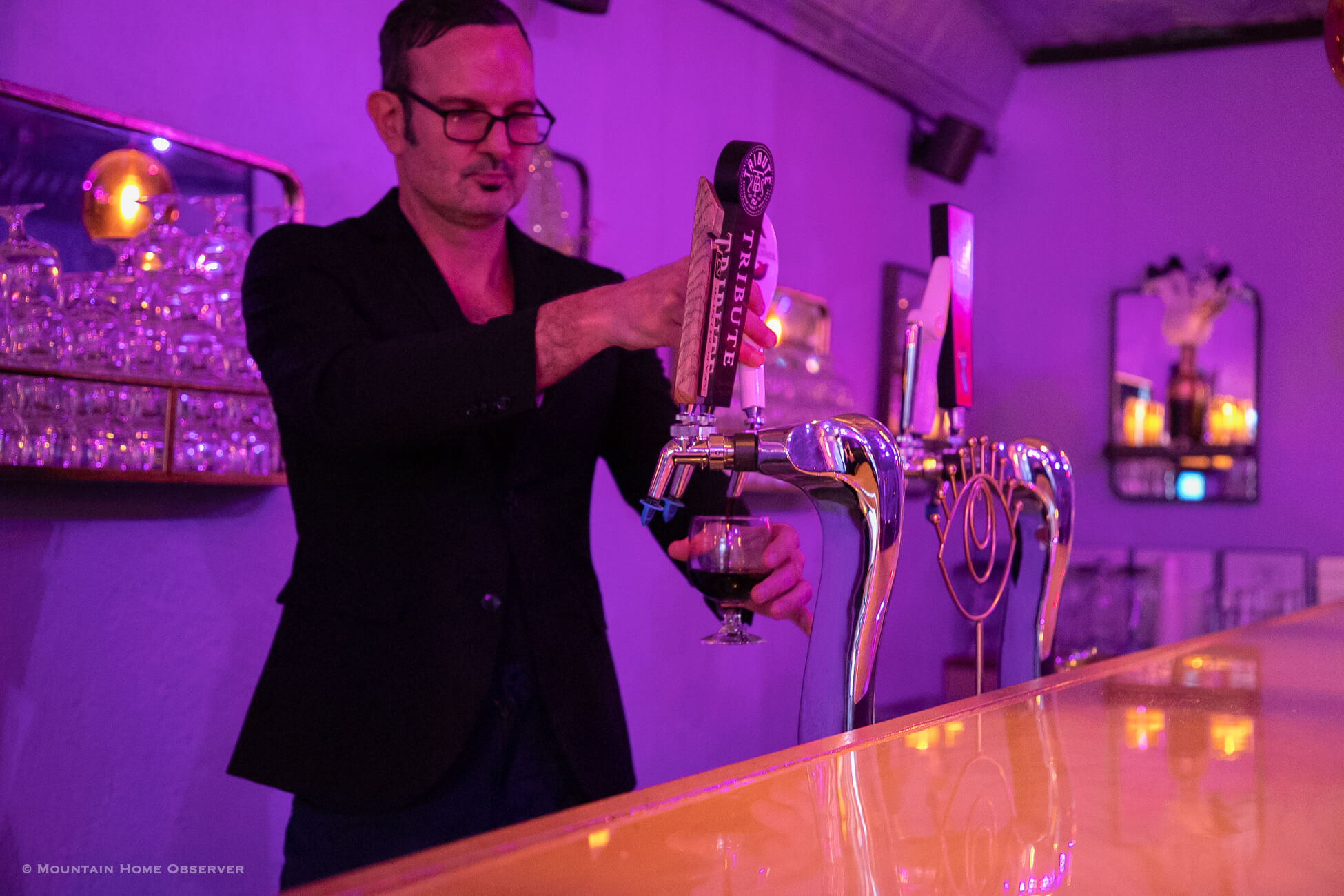 Blast from the Past: Mountain Home speakeasy brings unique twist to city’s nightlife

When Greg Hodges returned to Mountain Home and the Ozarks in 2017, he was looking for a change in his life.

The veteran disk jockey had just sold his two bars, The Nines and The Nines Alley, in Fayetteville and had returned to DJing full time after living in the western Arkansas city for almost 30 years.

He wanted a chance to slow down after spending his youth fulfilling his dreams. He was a successful DJ who had managed to buy his own nightclub. He even reached the top of his industry, becoming one of Modern Bride’s top 50 DJs in the country two years in a row in 2006 and 2007.

One of his first bars, Speakeasy, was voted best nightclub in Northwest Arkansas multiple times by CitiScapes Magazine.

Life was on autopilot, and the opportunity for freedom and change had just landed in his lap.

“I was in Fayetteville for so long, and I was just like if I’m ever going to make a change, the time is now,” said Greg Hodges, owner of Crush Studio in Mountain Home.

So Hodges packed his bags and moved his last remaining business to Mountain Home, where he would DJ for another year and a half.

Yet, Hodges still felt an “itch,” as something inside him told him it was time to hang up his DJ hat as well.

“I started feeling that itch, like, I think I’m done after 28 years,” Hodges said.

With that itch resting in the back of his mind, he started looking for his next business venture.

He would find it in a small building on the edge of the downtown district in Mountain Home.

“I was still making a living DJing, but that was getting out of my system, and I was like now what,” he said. “It was still in my blood, the bar business, but I didn’t think I’d do it here, but I decided that it’s something I know. It’s something I’m good at, and I found this building, and it all came together.”

Crush Studio was on its way to being born.

Originally from Elizabeth, Arkansas, Hodges moved back and forth across the Twin Lakes area as a child, attending school in both Mountain Home and Viola, before finally leaving for college at the University of Arkansas.

At college, he would work to complete his degree in communications before getting his DJing business off the ground.

“I went to school there and got my communication degree. You know, that degree you get when you don’t know what you want to do with your life,” he said.

And while he may not have known what he wanted to do right away while in college, he would quickly find his place in Fayetteville’s nightlife and wedding industry as a DJ.

As his career advanced, he began to dream of owning a club where he could play his music nightly in front of a crowd.

In 2006, Hodges and a small team of partners decided to make that dream a reality by opening The Speakeasy.

“I was 36 when I opened the Speakeasy,” Hodges said. “Being a DJ, you know, you’re still young and dreaming, like, how cool would it be to DJ at my own nightclub? Because I love creating dance floors, atmospheres, and all that. And I had never done club DJing at all, so I did it. We found a place, spent way too much money, and didn’t know what we were doing, but we went for it. I DJ’d my own bar for about three years.”

While the Speakeasy was successful, it came with a lot of stress and overhead, even with long lines pouring out of the doors.

The crew had gone too big, creating a Vegas-style nightclub that pushed out as much money as it poured in, leading Hodges to feel the call to create a smaller and more intimate bar.

After three years of DJing under the big lights, he parted ways with his partners.

“I learned so much, you know,” Hodges said. “I made all of the mistakes that you need to make so you can learn.”

With the Speakeasy behind him, Hodges opened his second bar, The Nines, in 2013. Boosting a mere 500 square feet, The Nines was the perfect intimate setting for Hodges, allowing him to host only 25 people at a time.

Three years later, he would add his third and last Fayettville bar, The Nines Alley, after falling in love with a building he found in town.

“Sometimes, if I can get an old building I like, then I’ll do a bar,” Hodges said. “Like, I’m not just trying to do a bar. It’s all about the right space and the right feel. So, there was a building I had been looking at forever, and I finally went to the owner, and it wasn’t even for rent, but I just had a feeling I could get it for some reason.”

Both of his bars were successes, drawing in a good supply of customers with their traditional speakeasy vibes, as well as the buyer who would eventually convince Hodges to sell and return to Mountain Home.

“I had someone approach me about The Nines. Someone that came in every once in a while and was like, ‘Oh, I’d love to own a bar,’ and ‘I love this bar,’ and I kind of knew she was angling,” Hodges said. “I was like, well, we can talk. I didn’t know if she was just drinking and talking or if she was really interested. So, she sent me a message, and she was serious.”

With his DJ business winding down in Mountain Home and a new building in his eye, Hodges quickly worked to set up Crush Studio, putting everything he had and then some into his new speakeasy.

The move was a risk. At the time, the city’s now popular entertainment district, which allows people to drink outside at restaurants and events in the square, had not yet been implemented.

Mountain Home was also lacking a nightlife, as the city was just in the process of what would eventually become a huge growth spurt of economic activity.

“It was a leap of faith, but honestly, I felt like Mountain Home needed something,” Hodges said. “Something cool, a place to go. A place to go have a drink and chill, and a place with atmosphere.”

And atmosphere does Crush Studio have.

While it may look like a regular building downtown, on the inside, it’s all mood lighting, art, and music, creating a relaxing atmosphere to sit back and have a glass of fresh wine straight from the bar’s tap.

For those wanting an even more intimate setting, a little exploration reveals a back room that places host to some of Crush Studio’s more expensive bottles of wine.

“There’s something about the find of a speakeasy,” Hodges said. “You’re getting the right people at a place where you don’t overly promote. I didn’t want to be right on the square. This is perfect. It’s kind of over here, and it’s dark.”

Crush Studio features both wine from California and Oregon and beer from Arkansas-based breweries like Norfork Brewing Company and Ozark Beer Company.

“I have what’s called a wine of tap system,” Hodges said. “What that allows me to do is serve it at the precise, perfect temperature because it’s very important for a wine to be served at a perfect temp for the right flavor. It also keeps it fresh.”

Crush Studio is now in its third year of business and celebrated its grand reopening this Dec. after closing its inside service for almost two years due to the COVID-19 pandemic.

Hodges, who has also expanded seating into the alleyway by the bar, had implemented a Thursday to-go service called Wine Walk, which allowed patrons to enjoy a glass of wine and listen to live music outside as a workaround for the pandemic.

Crush Studio is now fully open Thursday through Saturday from 5 p.m. to 11 p.m.

“I think it’s fun for people to find something to be a part of, something that not a lot of people in the whole world know about,” Hodges said.