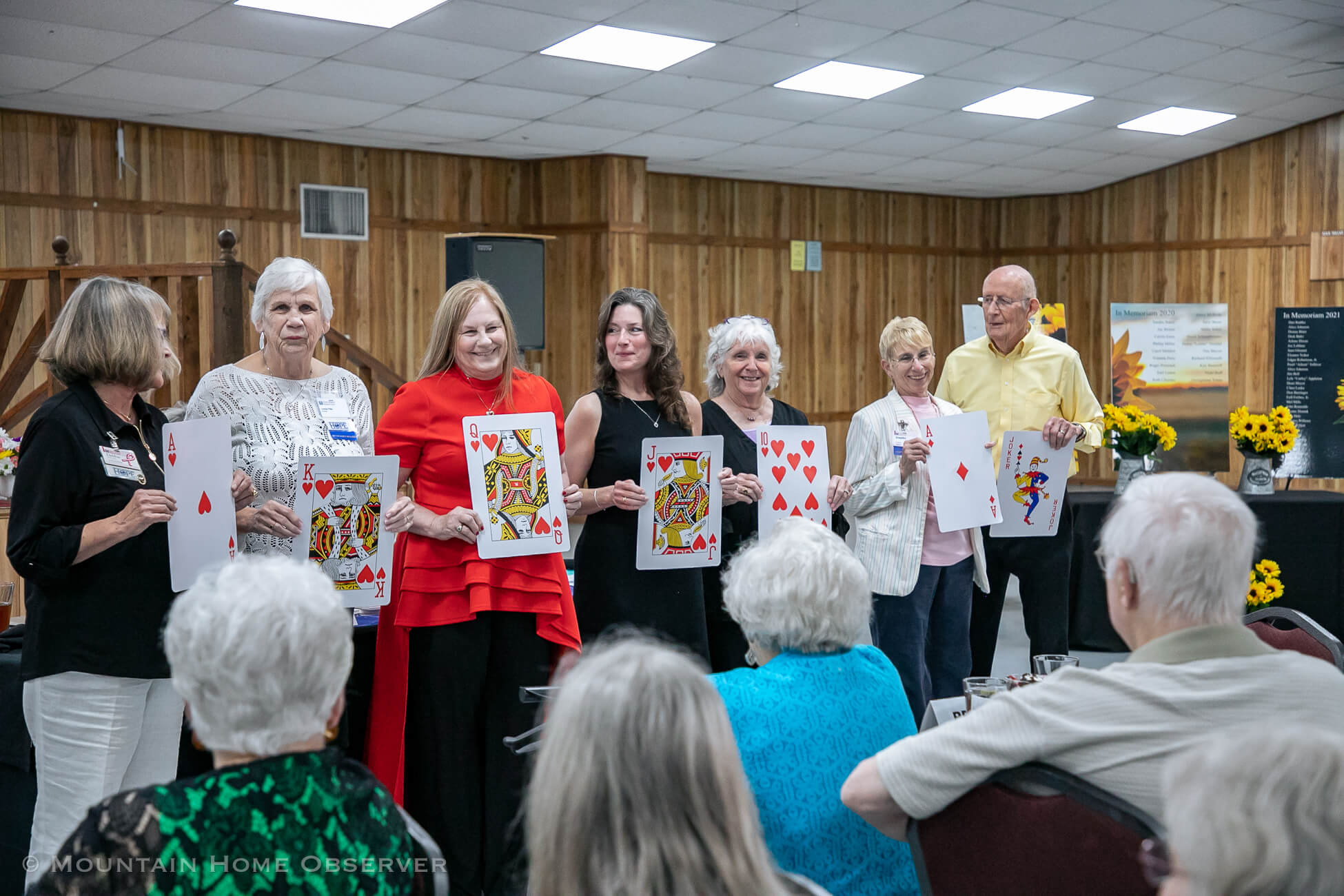 The banquet of over 300 volunteers also saw the auxiliary swear in its new officers for 2022-2023 before giving a warm send-off to former Auxiliary President Jim Whalen, who turned his position over to the auxiliary’s new president, Joan Young.

“Thank you for your leadership for the last two years,” said Becky Rose, CVM director of volunteer services. “Your intelligence and work ethic during the time of COVID has been an inspiration to this group. You stayed informed on legislation and how it can affect BRMC. You’re always sharing with other groups the need and how great it is to be a volunteer at BRCM.”

On April 9th, 1962, 32 women from various organizations and churches in Baxter County met at the First Presbyterian Church in Mountain Home to discuss forming an auxiliary for a new proposed Baxter General Hospital.

Following that first meeting, those women met once again on June 11 and unanimously agreed that anyone who purchased an auxiliary membership by Oct. 1, 1962, would be considered a charter member of the auxiliary. The newly formed auxiliary would have 151 members by that date.

Since then, the Baxter Regional Auxiliary has gone on to create the Mountain Home Bargain Box in 1962, the Pink-A-Dilly in 1984, and the Flippin Bargain Box in 2008, which have been serving Baxter County residents for decades.

The auxiliary has also adopted several uniforms over the years, ranging from pink smocks to red vests. In 2004, the auxiliary would finally settle on wearing yellow shirts with navy pants, earning the nickname “Yellow Army” from Clark Fletcher.

Throughout the years, the volunteers of the auxiliary have racked up a list of accomplishments that they can be proud of. In 1963, volunteers rolled up their sleeves and helped administer the sugar cube variant of the Polio Vaccine to children in Baxter County, including a young Joan Young.

“I was one of those little kids that got it,” said Joan Young, the new president of the Baxter Regional Auxiliary. “I was so excited because it was a sugar cube, and I wasn’t going to have to get a shot. So, my mom didn’t have to chase me down a hallway for a change.”

Its members have also served as hostesses for hospital events, assisted with blood drives, provided newborns with blankets, and more. They also purchased 11 ambulances to the tune of $20,000 per ambulance.

In 2021 alone, at the height of the COVID-19 pandemic, its 455 volunteers worked 64,021 hours and donated $647,453 to the hospital. The auxiliary is credited with helping Baxter Regional in assisting with COVID-19 vaccinations.

The position of treasurer now falls to Carolyn Rice, with Tammy Bellettiere serving as recording secretary. Mountain Home City Councilwoman Jennifer Baker will serve as the corresponding secretary. Jim Whalen will continue to act as an advisor for the auxiliary officers. Each officer was given the traditional playing card representing their new station. When put together, those playing cards create a Royal Flush, a symbol of prosperity for the auxiliary.

Volunteers also received a speech from Young, who told the tale of how she volunteered at BRMC with her mother, Connie Roderick. There was also a small memorial for the volunteers who passed away from 2019 to 2021.

The evening concluded with several recognitions of service and a raffle.

“God has blessed us with you,” said Barney Larry, executive director of the Baxter Regional Hospital Foundation. “We hope that you’re receiving a blessing from doing what you do, of being servant givers. That’s what you are. You’re serving because you love people, and we love you. And we couldn’t do it without you. We’re independent today because of our volunteer group.”