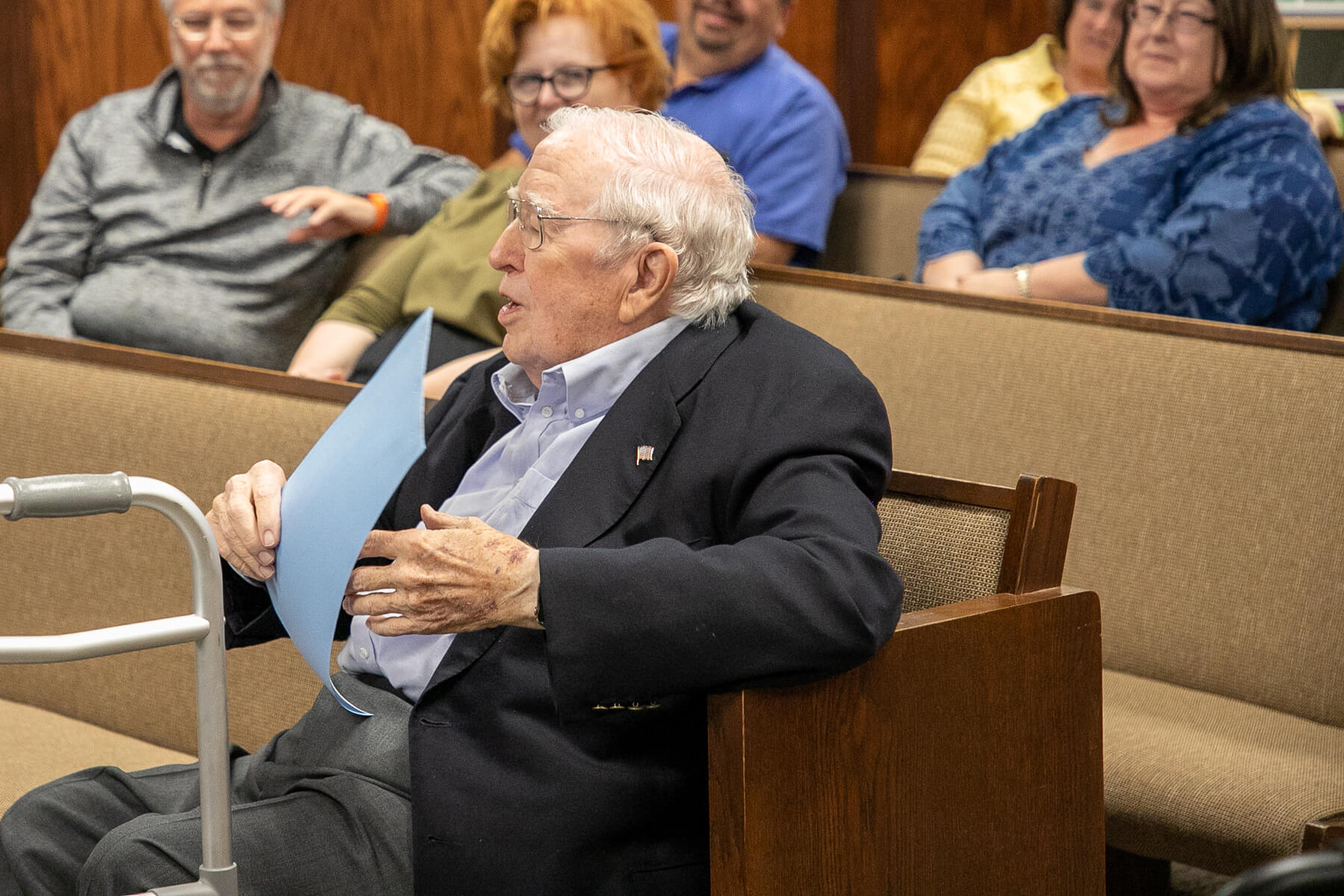 The City of Mountain Home celebrated the life of telephone and television business star Calvin Czeschin, who spent his career helping the city since 1958, during the Dec. 2 city council meeting.

Czeschin is credited with modernizing the city’s telephone and television services throughout his long career. He will be celebrating his 86th birthday Dec. 8.

“His family purchased Mountain Home Telephone and Yelcot Telephone companies in 1958,” said Mountain Home Mayor Hillrey Adams during the reading of Czeschin’s proclamation. “He was named general manager and chief operating officer of both companies at the ripe young age of 23 years old.”

In 1953, his family moved to Blytheville, Arkansas, where he would finish high school before graduating from the University of Missouri in Columbia in 1957 with a degree in Geology. Czeschin began managing his family’s telephone companies in 1958.

“One of the first things Calvin did was install a switch for customers to make their own local seven-digit calls instead of the operator dialed party line service,” Adams said laughingly. “Boy, you cut out a lot of gossip.”

In 1964, Czeschin faced the difficult task of restoring phone service after a gas leak caused an explosion that rocked his company’s central office in Cotter, Arkansas, blowing out windows up to a mile away. Under his leadership, service was restored within a week.

After the explosion, the young telephone manager upgraded their Henderson facility by laying out submarine cables from Mallard Point across Norfork Lake.

Calvin was elected to the company’s board of directors in 1974. He was on the board when the company was listed on the New York Stock Exchange in 1978 and would ring open the Exchange himself in 2006.

He served on the board for 34 years.

“My understanding is that he may be the only resident of Baxter County to have ever rung the opening bell to the New York Stock Exchange,” Adams said during the ceremony.

In 2007, the Mountain View Telephone Company was purchased, allowing the company to begin the 153-mile fiber backbone project from the White County line south of Batesville to Bruno.

Czeschin also expanded his family’s business by forming what would become the Ultimate Auto Group in 1988 after purchasing a Chrysler-Dodge-Jeep dealership.

As a leader in the community, he was one youngest of the eight incorporating members of First National Bank and Trust in Mountain Home, which is now part of Farmers and Merchants Bank. He also joined Baxter Regional Medical Center as a Chairman of the Board for 15 years.

He has been awarded the Citizen of the Year award by the Mountain Home Lions Club and is also a recipient of the Vada Sheid Lifetime Achievement Award.

He is also a veteran of the United States military.

“We appreciate everything you’ve done for this community over your years here,” Adams said.

Czeschin has been a devoted husband of 59 years to his wife, Ruth “Sissy” Baker, throughout his life’s achievements. The couple have four children, Betsie, Sara, Karen and Clint: and six grandchildren, Sloane, Richard, Anna Ruth, Paige, Haley and Trey.

“It’s been wonderful living here,” said Calvin Czeschin. “The people are great, and Mountain Home is just a nice town. And the area is one nice area. Thank you so much for this.”

Dave Says: You can have more than one