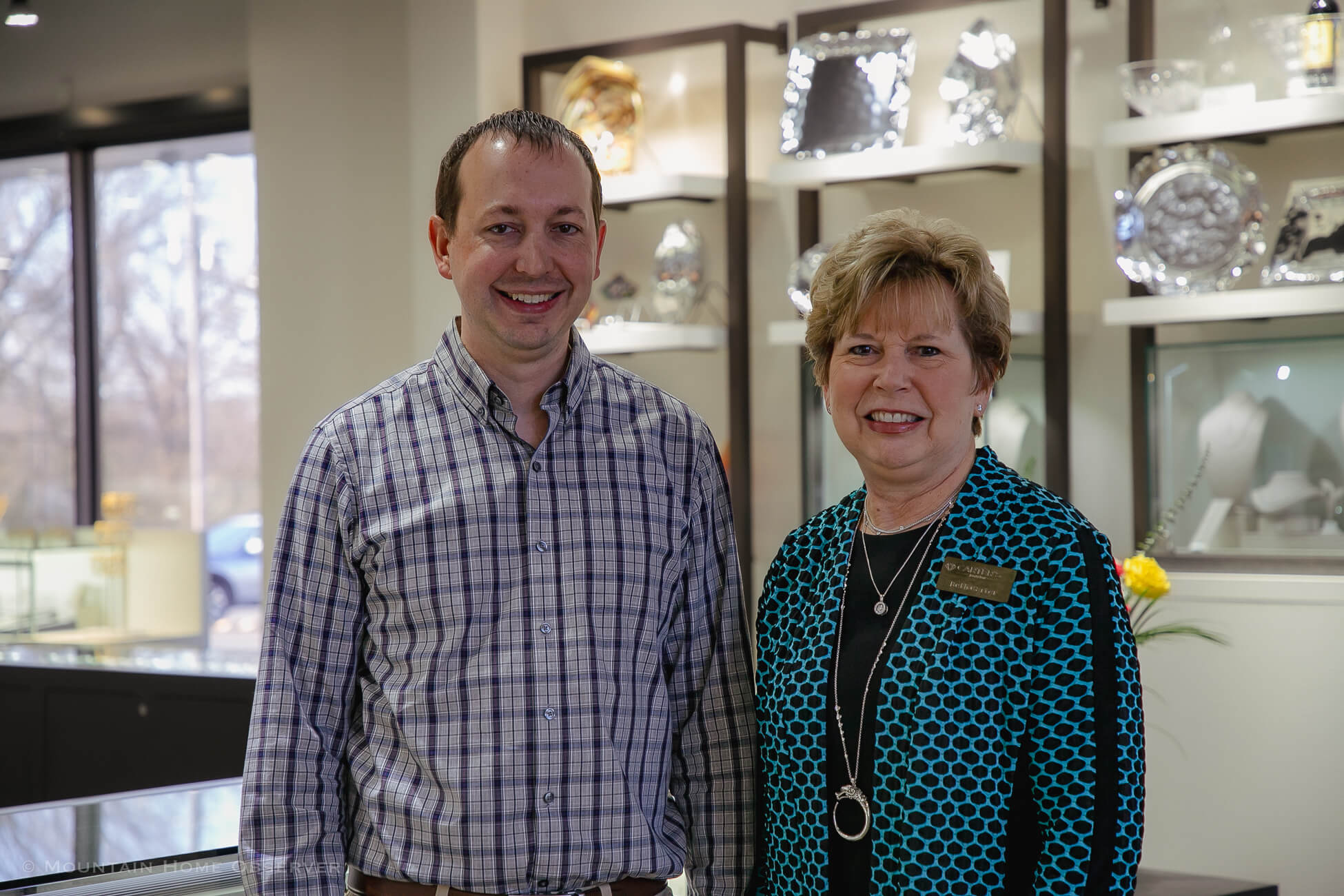 Every piece of jewelry in the world has meaning attached to it.

For some, it’s a sign of wealth, a way to show the world that they’ve achieved success.

To others, it’s a gift to be given to friends and coworkers. For the young couples of the world, it’s the promise of a long life together.

Yet, the jewelry that lines the shelves of T.C. and Beth Carter’s jewelry store in Mountain Home has a different story to tell. Their story is marriage, children, grandchildren, a 46-year legacy, and the ability to give back to the community they loved.

It’s the story of a life lived to the fullest.

“My husband and I started when we were 21 years old,” said Beth Carter, owner of Carter’s Jewel Chest. “We had both gone through jewelry school for watchmaking, jewelry design, jewelry repair, hand engraving – so between the two of us, we had all the qualifications you needed to get going, and he was able to start the first year.”

The road to creating one of Mountain Home’s most successful small businesses began with a young Beth Carter and a high school job at Horton’s Jewelry, now Gregory Jewelers.

There, Beth began her career in the trade while fostering a love of jewelry that would change the course of her life after graduating from high school.

The ebb and flow of trade school suited Beth, who said she enjoyed seeing her progress on each of her daily projects assigned while attending school at Gem City College in Quincy, Illinois.

Beth also said her three years at Horton’s helped her know what skills she needed to focus on to be successful as a jeweler.

“I had already been in the business for three years during high school, so I knew what to learn too. It was awesome,” Beth said.

While the work may have been exciting, Gem City College had another surprise for Beth. She met her husband, T.C. Carter, a young man from South Georgia who was attending the trade school to try his hand at watchmaking and jewelry repair.

T.C. Carter began his jewelry career much like Beth did, working in his parent’s small jewelry store in St. Mary’s, Georgia, before moving on to trade school in Illinois.

The two fell in love and were married in Mountain Home in September of 1974, where they would place their roots after graduating from Gem City College.

They would open The Jewel Chest in 1976 at Harp’s Shopping Center.

And did The Jewel Chest grow. Two short years later, the jewelry store was on the rise, becoming an official member of the American Gem Society.

“When we built the original shopping center, we were hoping for everything that a department store would have,” Carter said. “So, we had jewelry. We had ladies. We had children. We had a shoe store and a Hallmark store. That was our vision, to have everything you could get in a nice department store in the city.”

As time went on, more changes came to The Jewel Chest. In 1994, the Carter’s decided to rebrand their business into Carter’s Jewel Chest. They also began traveling to Antwerp, Belgium, in 1995 to begin purchasing the best diamonds they could find.

In 2002, they completed their first remodel of their store – just in time for their son, Chris Carter, to begin showing interest in the family business.

Like his parents, Chris, who now runs the business alongside his mother following his father’s retirement, got his start in the industry during high school in 2003 after becoming fascinated with the store’s computer engraver.

He would graduate from the Gemological Institute of America out of Carlsbad, California, as a gemologist alongside his wife Nicole in 2007. With his help, Carter’s Jewel Chest brought CNC milling and CAD/CAM jewelry design to the family business.

Carter’s Jewel Chest would be selected to sell Hearts On Fire diamonds in 2005. The brand is referred to as “the world’s most perfectly cut diamond.”

“We went to a CAD/CAM, computer rated design and manufacturing,” said Chris Carter. “So, we started cutting jewelry and then CNC milling it.”

Beth Carter said the technology side of the business was a natural “in” for Chris, who now oversees much of the store’s day-to-day operations.

With Chris and his wife now a part of the family business, the Carter’s kept pushing on, becoming partners with several of the world’s biggest brands throughout the years, including De Beers Forevermark, Gabriel & Co., and Le Vian.

They also secured the John Hardy line, a big win for the business.

“We worked for five years to get that line. We courted them,” Beth Carter said. “We kept getting the answer that it was too small of a market. There was one excuse after another about why they couldn’t sell to us here. We finally got in the door with them. They came to open with us that day. They sent their national sales managers and their area rep. It was a nasty, rainy day. And I thought this is going to be a disaster. They had the busiest opening day they said they had anywhere.”

In 2018 the Carter’s remodeled their store once again, adding a bigger showroom floor with more amenities, including a hospitality bar, children’s playroom, and an electric vehicle charging station.

They were listed as one of “America’s Coolest Jewelry Stores” by INSTORE magazine in 2020.

“We’re still mom and pop, if you will,” said Beth Carter. “But it’s with a lot of help. I’d say we’re on the larger side of mom and pop. Let’s put it that way. Still run that way.”

As their business has grown over the years, so too has the desire to give back grown in the Carters. Today, the family and their business host three charity events every year: The Red, White & Blue Festival, Carat Cake for Christmas Wish, and Into the Light.

Beth Carter said she tries to support every organization and charity when asked.

“There’s so many needs in the area, and honestly, I felt guilty because I didn’t have the time to be on the ground to help with those needs,” Carter said.

Carter’s Jewel Chest is home to 13 employees with extensive backgrounds in producing some of the finest jewelry in North Central Arkansas. The store is located at 860 Highway 62 East in Mountain Home, Arkansas.