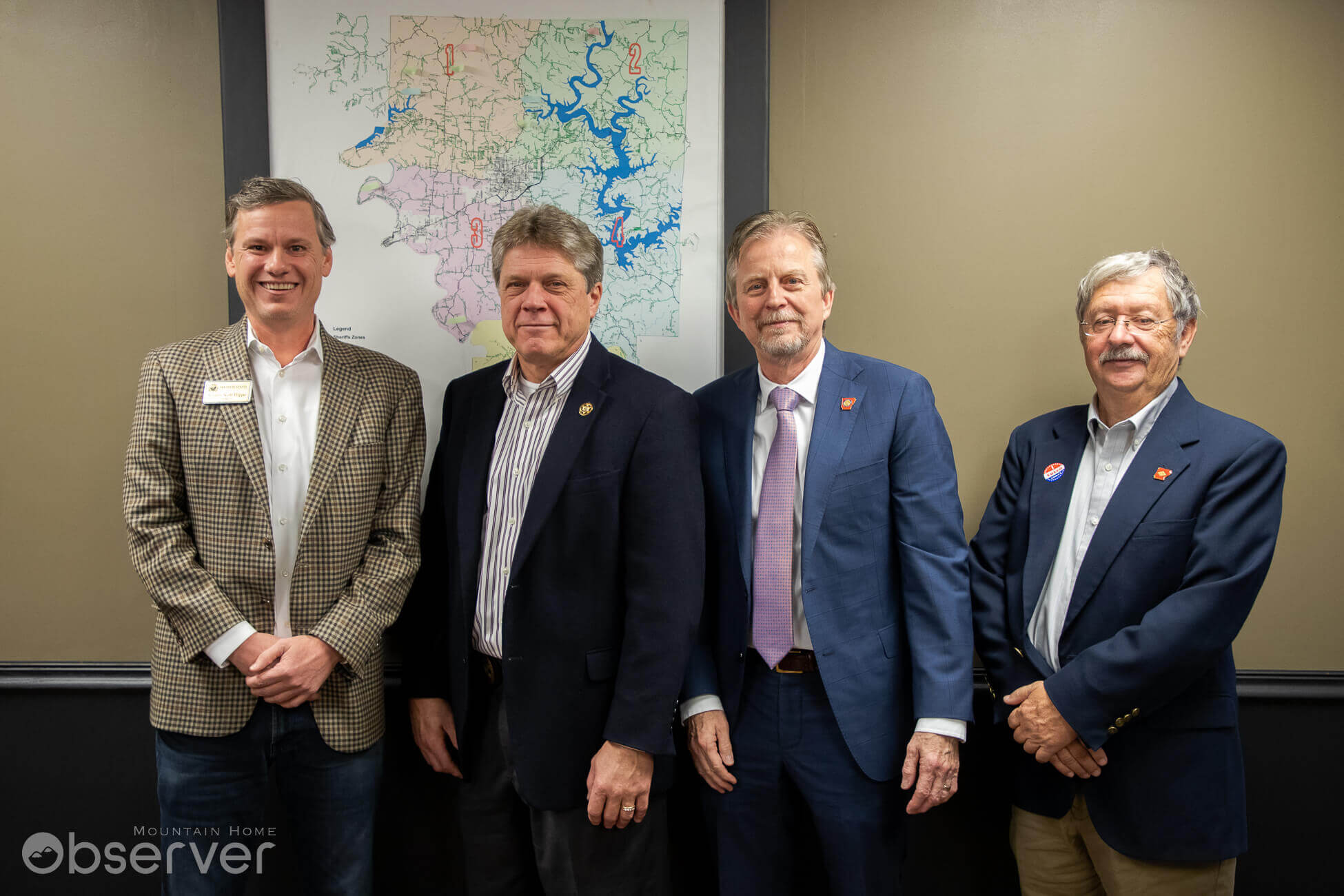 Baxter County Sheriff John Montgomery hosted a press conference on Tuesday to discuss potential problems that may arise if voters approve an amendment to Arkansas’s constitution that would legalize marijuana for personal consumption.

“I will certainly tell you that my attitude has changed about marijuana over the last 34 years,” Montgomery said. “But having said that, it’s still my opinion that it’s not a good drug. We have of this morning, 123 people are in the Baxter County jail, and at least 80% or more of those that are incarcerated are there because of drugs or something drug-related.”

During the press conference, all four public officials laid out a case against Ballot Issue 4, which would legalize marijuana underneath the Arkansas Constitution.

Ethredge argued that Arkansas prosecutors were not prosecuting a large number of marijuana cases, with most cases being tried as simple misdemeanors and that changing the law would have no effect on who is going to prison.

Magness, who has been on the Board of Corrections for 21 years, stated there was a public myth about criminal prosecutions for marijuana in Arkansas and that only nine of the 17,000 inmates in Arkansas’s prison population were serving time for marijuana possession.

“My concerns, as a prosecutor, are that we’re going to create a whole new set of problems,” Ethredge said. “Every day, when I come to court, we’re dealing with some kind of issue with addiction. We’re fixing to add a new layer of addictions is what we’re going to do. I see what it does to families that I have to talk to now because they’ve got some family member that, because of an addiction, they’re now committing a crime. Those are the concerns I have.”

Other concerns that Ethredge had about marijuana legalization focused on potential increases in traffic fatalities involving the drug and on future legislation that will strain law enforcement departments, requiring them to request more resources.

“Follow the money,” Ethredge said. “There’s a reason there is so much money being spent on this marijuana campaign because there’s going to be a lot of money being made. It’s not going to be made by simple people. It’s going to be by people who are doing illegal drug activities. Again, check with Colorado on what they’ve seen.”

Magness further followed on marijuana in Colorado, citing one of the Board of Commissions studies into Colorado to create projections of potential growth for Arkansas.

He said that a member of the study lives in Colorado and has reported that petty theft has “went out the ceiling.”

“We both use Colorado as an example,” Magness said. “I think where you really have to go as an example is Oregon. Oregon made their marijuana legal, and now, they’ve made a lot of other drugs legal. Simple possession. Anybody in the justice system knows that this is not the right thing to do.”

So, what does recreational marijuana legalization look like in Colorado?

The report, which can be found here, states that total revenue from taxes, licenses, and fees from about 2,700 licensed marijuana businesses totaled more than $387 million in 2020 alone.

It further states that “the total number of marijuana arrests in Colorado has dropped since legalization, although the arrest rate for Black people remained disproportionately high compared to white people.”

The report also finds that while adult usage of marijuana has risen, there has been no significant rise in marijuana usage amongst children.

Other highlights from the report include:

While it’s unclear if voters will approve Issue 4 on Nov. 8, the issue being on the ballot has brought major concerns to light within the Baxter County Sheriff’s Office.

Following presentations from Etheredge and Magness, Montgomery expressed his concerns about what troubles his deputies may face if marijuana becomes legal.

Firstly, Montgomery said he was concerned about detecting impaired drivers. Even if the ballot measure is passed, driving while under the effects of marijuana will still be illegal.

The problem Montgomery said he is facing, is that unlike alcohol and BAC testing, there is no standardized test to determine if someone is impaired by marijuana. This issue is further compounded by the fact that THC stays in a person’s blood stream up for several days or weeks after smoking. Those smoking regularly could still test positive for THC months after quitting.

Ultimately though, Montgomery said he was more concerned about how legalization could affect families down the road.

“Another issue that I think is kind of important to me, is when you look at families and you look at the impact it had on them. This drug issue has just torn people apart,” Montgomery said. “I just don’t see how legalizing this drug is going to make that better.’

Arkansas is one of 15 states where citizen groups can put a proposed constitutional amendment, state law, or veto referendum on the ballot with voter petitions.

The amendment to decriminalize personal marijuana usage is the only amendment on this year’s ballot to have gone through the court system. After a lawsuit was filed to stop the amendment from being on the ballot, the Arkansas Supreme Court ruled votes cast for or against Issue 4 would be counted on Sept. 22.

This citizen-proposed amendment, titled Ballot Issue 4, asks voters to change the Arkansas Constitution to allow and regulate cannabis, also referred to as marijuana, for non-medical purposes. The proposal also would make numerous changes to add, alter or remove parts of Amendment 98, currently known as the Arkansas Medical Marijuana Amendment of 2016.

In 2016, Arkansas voters approved The Arkansas Medical Marijuana Amendment of 2016, which established a legal process in the state to grow, sell, buy and possess marijuana for specific medical purposes.

The first medical marijuana was sold in Arkansas in 2019. In 2021, the state received medical marijuana card applications from 94,142 people. They also note that the taxes raised through the sale of legalized marijuana will benefit the entire state.

Proponents of the amendment say that the bill is a good first step into legalizing marijuana throughout the state of Arkansas and that the majority of people want marijuana to be legal.

Some opponents of the measure have cried foul. Noting that proposed amendment was placed on the ballot by rich people looking to line their pockets with money from recreational use.

State Senate leader Scott Flippo, who opposes Issue 4, said that proponents for the measure were attempting to create a pro law enforcement narrative by running mailers and commercials that claimed that law enforcement backed the measure because of the revenues that would flow back into departments across the state.

He noted that the funds created by legalization would not be enough to cover the cost of the issues facing law enforcement in the future, and that many law enforcement officials, including those in Baxter County, had serious concerns about impact of the amendment on residents throughout Arkansas.

He also raised concerns that the amendment would hamstring legislators’ ability to make changes to marijuana laws in the future.

“They’re running commercials without using two relevant words. Recreational or marijuana,” Flippo said. “’A vote for Issue 4 is a vote for law enforcement.’ If we’re going to be having a conversation or debate at least, it ought to be an inherently honest debate that is predicated upon facts and not disseminating this information to people, hoodwinking them into support something they otherwise would not.”