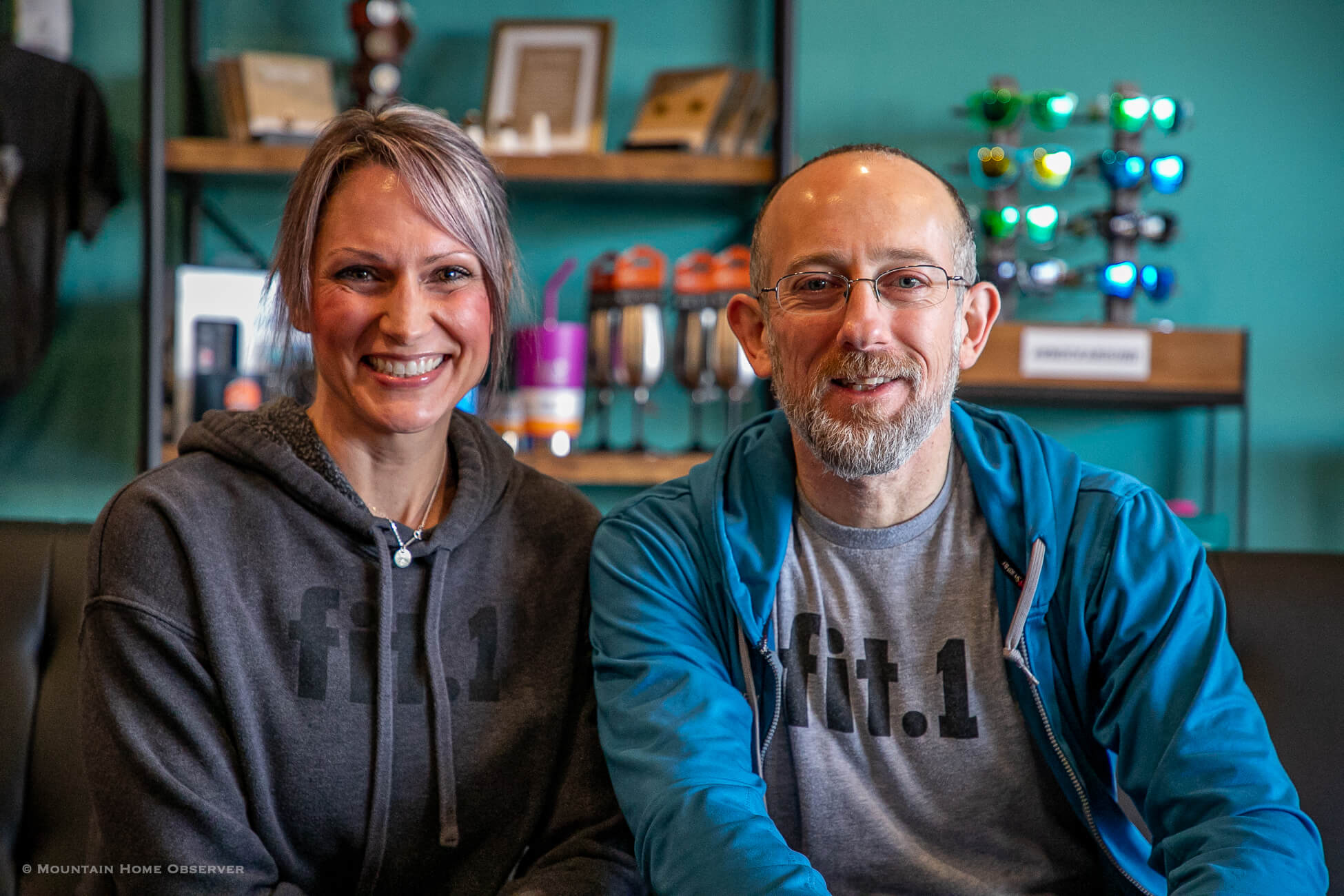 The New Year is officially in full swing, and people all over the world look to once again fulfill that old faithful New Year’s resolution of shedding those holiday pounds and getting that perfect summer beach body.

Yet this year is different. The days of hitting the gym for vanity projects like beach bodies are gone, replaced by the desire to shed pounds to increase survivability with COVID-19 and overcome the mental toll of facing lockdowns, death, and a flailing economy.

Gyms culture is making a comeback as “health is wealth” has become a rallying cry for millions across the U.S. For fitness gurus like Misty of Fit.1, the gym grind isn’t just about health, it’s a way of life and a path for mental well-being.

“It changed my life, so I know that working out changes lives,” said Misty Gigliotti. “It’s kind of our motto, ‘changing lives with every class.’”

To say that the world has changed because of COVID-19 would be an understatement.

Research from the University of New Mexico into COVID-19 and obesity has shown that 48% of all Americans gained weight during the first year of the pandemic.

That weight gain brings with it an increased chance of death and long-term health complications from COVID-19, per the Center for Disease Control and Prevention. The weight gain specifically targeted children, who saw a sharp rise in weight gain after being locked down, and adults aged 25-59 years old.

Obesity has been linked to increases in cardiovascular diseases, type 2 diabetes, various forms of cancer, and musculoskeletal disorders like arthritis.

Most weight gain comes from a sharp increase in the uptake of food consumption, usually brought on by the stresses of everyday life.

In its latest study, Brown University discovered that 32.8% of adults in the U.S. experienced a significant increase in feelings of depression and anxiety in 2021, a rise of 8.5% over the previous year.

For children, the rise in mental health issues has gone from between 10-20% of children diagnosed with an issue to 20-25%  pre-pandemic, to roughly 25% of all children in the U.S. now having some form of diagnosis.

This increase in depression and other mental health issues has led to increases in suicide, drawing dire warnings from health officials who have used phrases like “a tsunami of suicide,” “dual pandemic of suicide and COVID-19,″ and “suicide mortality and COVID-19- a perfect storm.”

Since the pandemic outbreak, there has been a 50% increase in suicide attempts by women and a 4% increase amongst men.

Research suggests that a healthy lifestyle, and regular exercise, can help decrease the effects of depression and anxiety.

Misty Gigliotti is one of Mountain Home’s biggest mental health advocates. A former writer for Marvelous! Magazine, Misty has written several articles focusing on mental health, her own struggle with bipolar disorder, and the stigma of being diagnosed with a disorder.

Her journey to mental well-being and physical fitness was a long one that eventually led to the creation of Fit.1 with her husband, Paul Gigliotti.

Misty’s first encounter with mental health began in high school after she entered an abusive relationship with her boyfriend. The experience was challenging for Misty, who was eventually checked into a psychiatric hospital for the first time.

After high school, she continued to experience extreme highs and deep lows throughout her college years before hitting rock bottom in May 2010.

“I’ve always been an athlete,” she said. “I struggled with what was diagnosed as depression when I was a child at 16. I was later diagnosed with bipolar disorder when I was 31, which is common to be diagnosed at a later age.”

As a marketing director for a bank in Little Rock, Misty pushed herself to her limits by working full time during the day while taking college courses for her master’s degree at night following a divorce from her first husband.

Bipolar disorder is a mental disorder that causes unusual shifts in mood, energy, activity levels, concentration, and the ability to carry out day-to-day tasks.

“I’m not typically a quitter, but on May 23, 2010, I gave up,” Misty wrote in her article detailing her struggle with mental wellness. “Fortunately, it wasn’t my time or the end of my story. Because I was in such a dark place and had struggled for so many years, I couldn’t see the most important thing during that time, especially that night – that all of our feelings are temporary.”

Over several years, Misty worked on herself by embracing fitness and healthy eating. She cut out processed foods and began taking supplements. She began working out and running faithfully.

Through her new lifestyle, she also cut down on her medications and forged a new career path here in Mountain Home.

“This is the happiest, healthiest, and fittest I have ever been,” she wrote, about her lifestyle change. “I still have sad moments because I’m human and I’m sensitive, but I haven’t been back to that darkest place in years.”

In 2018, she would again struggle with her mental health after a local professional called her “crazy,” revealing her diagnosis of bipolar disorder.

While she originally planned to ignore what was said, Misty began to feel compelled to tell her side of the story, leading to her first written column in Marvelous!.

“Once I shared my story, I had a pouring of people who reached out to me, telling me what they’ve been diagnosed with and what they struggle with,” she said. “They felt comfortable sharing it with me since I was open and shared mine publicly. And so, a lot of them have since used fitness. Some of those people are now in the gym and love that piece about us that I share openly.”

Misty would follow up her article one year later to address some of the stigmas that came with being diagnosed with bipolar disorder.

“In 2018, it was a real positive spin on it, about how you used to have a lot of struggles but had found fitness and real food and had really turned it around. It was really my highest point,” Misty said. “And then in 2019, I shared how the stigma I found because of sharing my story kind of put me into a downward spiral. Fitness helps me more than anything. That’s one of the reasons I think we opened this gym because it helps me more than anything else I do. I can be down, and even if I’m not working out, I can teach a class and come out super high.”

Their gym, which also shares a building with their other business, features a variety of fitness programs, including TRX strength and condition class, Barre class, high intensity interval training (HIIT), and a specialized HIIT circuit for the lunch crowd called the “30-Min HIIT Circuit.”

“It’s not the typical gym where you walk in and use the machines, and it’s open 24/7,” Misty said. “It’s all group classes. We have various types of yoga. TRX, which is suspension training. We have a 30-minute HIIT circuit. It’s a two-hour window every day for lunchtime from 11 a.m. to 1 p.m., and it’s a drop-in, which is a pretty cool thing that people love.”

Fit.1, pronounced “fit point one”, refers to the 13.1 miles in a half-marathon, has eight trainers available to assist in exercises and is open seven days a week. Most classes are held in dim lighting to create a relaxed mood.

The gym, which is split into several different rooms, was designed with comfort in mind and has a sitting area with couches and a coffee bar for those wishing to catch up with each other before or after a workout.

“I think our quaintness kind of adds a little bit of allure to coming in here,” said Paul Gigliotti, as he gestured to guests sitting on their couch. “That kind of thing happens all the time, which is why we have a couch and chairs here because we want people to hang out like it’s their home away from home.”

“The fitness family that we have working out here that everybody feels super comfortable with each other,” Misty said. “Everybody is comfortable. There are all shapes and sizes. Every fitness level. Every age. Every class can be modified so everyone feels comfortable. It’s a place for everyone, and that’s a big deal to me.”

Arvest Foundation awards $2,000 grant to Into the Light