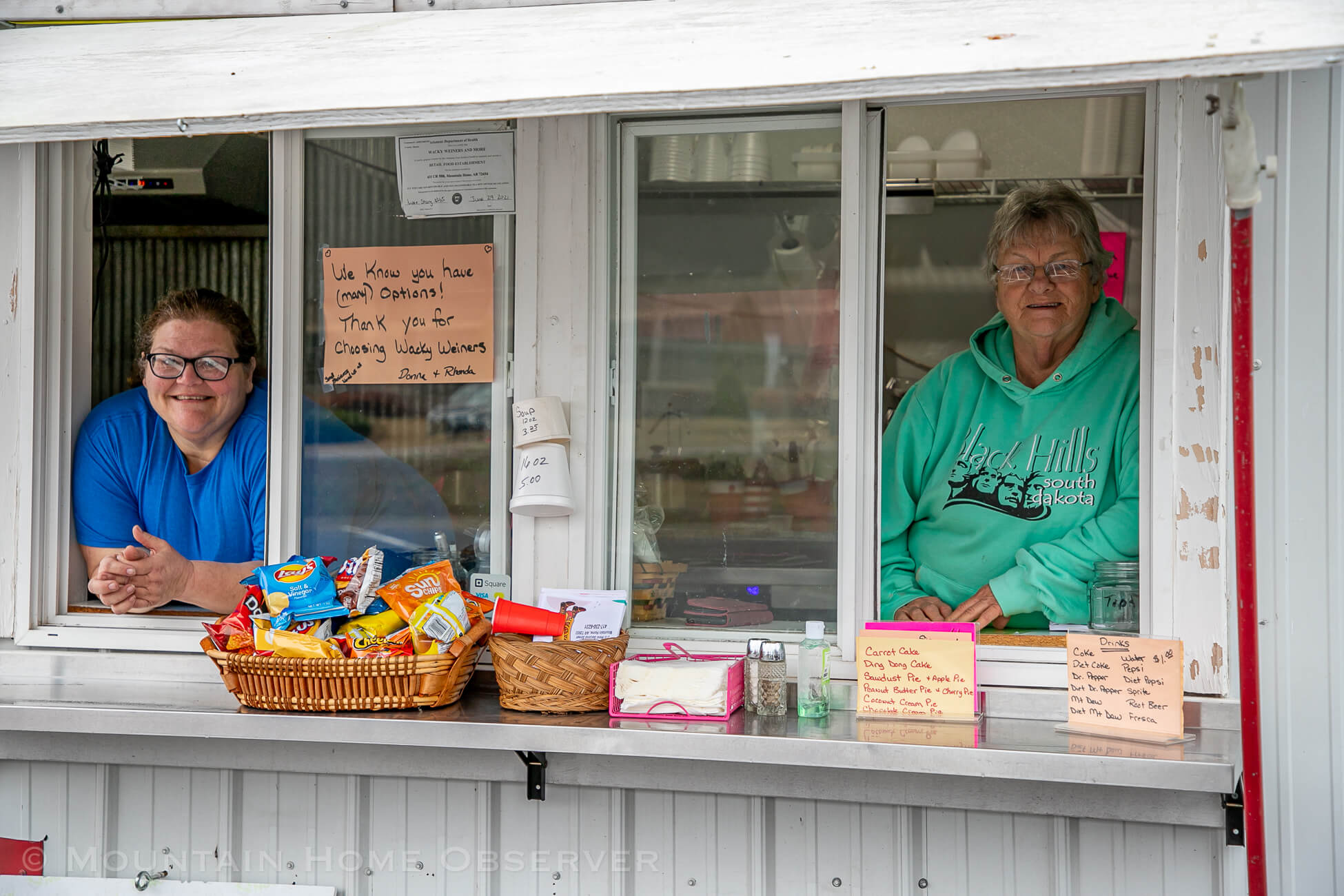 When it comes to American food, there’s almost nothing more famous than hotdogs.

Every year, millions of Americans gather around the grill to cook up some of the country’s greatest pastime foods. The popular weiners are served at sporting events, outdoor concerts, and, more often than not, dinner time for the kids.

According to the National Hot Dog and Sausage Council, the Fourth of July sees as many as 150 million hot dogs consumed in a single day. That’s enough hot dogs to make a line from Washington, D.C., to Los Angeles more than five times.

But sometimes, firing up the grill isn’t an option, and while Wacky Weiners and More may be changing ownership, the hot dogs stands’ founders still want Mountain Home to know that Wacky Weiners is still the best hot dog spot in the Twin Lakes area.

“I love hotdogs,” said Donna Baxter, the mother in the mother/daughter team that created Wacky Weiners. “I just wanted a simple little red cart on the corner there, but no, it turns into this.”

Retirement did not sit well with Donna Baxter. The pair have spent most of their lives working, with Baxter serving as a medical technologist for 54 years, while her daughter, Rhonda Jensen, worked her various restaurants, including Cattlemen’s in Green Forest, Hungry Farmer in Oak Grove, and Hungry Farmer’s Wife in Berryville.

After finally settling in the Mountain Home area after falling in love with the community, both women decided to abruptly end their retirements after enjoying a morning cup of coffee together in 2021.

“Well, we were sitting on the front porch drinking coffee, playing cards, and she always wanted to open a hot dog stand,” said Jensen. “We have a history in restaurants, so she said, let’s open a hotdog stand. And within a matter of probably 48 hours, we were on our way to Oklahoma to buy a food truck. I decided to tell my husband about it after that.”

Their trip to Oklahoma paid off, and Baxter and Jensen were able to find a quality food truck for only $11,500.

With the new food truck in hand, the pair began setting up the truck in Midway around the summer of 2021. But before they could start selling hotdogs, the women had to come up with a name.

Luckily, Baxter already had one in mind.

“At her other restaurant, she had waffles for breakfast, and I had wacky waffles. I put stuff together like that,” Baxter said. “So, I said, well, let’s do wacky weiners.”

The food truck paid off, and Wacky Weiners and More was quickly invited to move into Mountain Home proper in September of 2021.

Names for Wacky Weiners hot dog creation range from “The Original” to “The Taco Dog.” Hot dogs come in ¼ and ½ pound sizes. The hot dog stands’ bratwursts are made locally in Mountain Home.

Wacky Weiners has also rolled out made-to-order ¼ pound hamburgers that can be loaded with all of the stand’s wacky toppings. Baxter also sets out fresh homemade pies for sale during the day.

“We do whole pies to order,” Jensen said. “If someone wants a whole pie or something, we do them order.”

Wacky Weiners has been one of Mountain Home’s most successful food trucks. Sadly, the hot dog stand has been closed more than it has been open after Jensen suffered health complications that landed her in the hospital.

Because of her health issues, Jensen and Baxter made the decision to put up Wacky Weiners for sale. It sold last week to Nikita Montez, who Jensen said also had a dream of owning a hotdog stand of her own one day.

“I had tubes and everything coming out of me. I just couldn’t keep up.” Jensen said.

Jensen said that Montez is in the process of taking over Wacky Weiners and will be keeping up the spirit of what Jensen and Baxter created by keeping the name.

Jensen, who is a big supporter of buying locally, said she hoped the hot dog stand continues to find success under its new owner.

Wacky Weiners is located in the parking lot behind Bank OZK Mountain Home on Hickory Street in Mountain Home.

“We love this community,” Jensen said. “This has been the most welcoming community we have ever seen. The support that this town gives its local businesses is amazing. Absolutely amazing.”