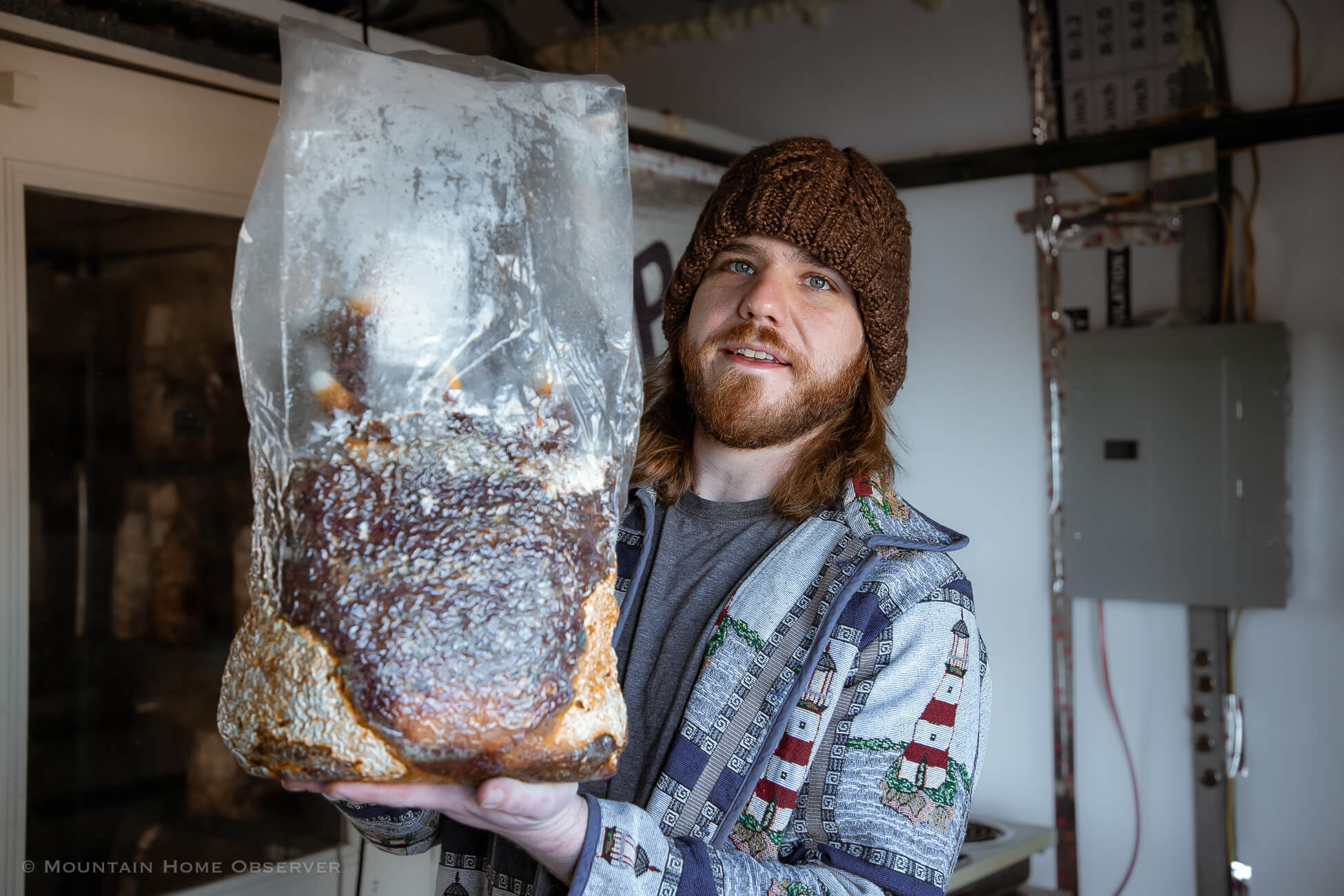 From petri dishes to the kitchen table, the risky business of growing mushrooms

Growing mushrooms is a risky business.

Starting from a single spore in a petri dish, a batch of mushrooms is at risk for the entirety of its growth cycle. Every time a batch expands, the risk of infection from mold and bacteria grows with it, potentially killing the mushrooms before they hit the market.

It’s why Garrett Mudgett, owner of Ozark Mountain Mushrooms, spends hours of his day meticulously cleaning his grow lab and tents from top to bottom.

Everything must be sterilized — the Petri dishes, the floors, the walls, and the tabletops. The HEPA filters and humidifiers that provide the perfect humidity for growth in each space must be spotless as well.

Mudgett even cleans the bottoms of his shoes with a bleach solution before entering the lab on his tiny farm outside of Norfork.

“That’s the hard thing about keeping everything clean enough,” Mudgett said. “Mold and bacteria love the humidity. So, it’s a battle between the mold and the cleaning. I’m cleaning all the time.”

Thanks to a rising interest in gourmet mushrooms for cooking, mushroom teas, health products, and food sustainability, mushrooms have seen a boom in popularity over the past few years. The mushroom industry grew to an impressive $7.58 billion industry in 2020 and is expected to reach $19.3 billion by 2030.

But Mudgett didn’t get into the mushroom farming game for the money. His journey into the industry began in early 2020, during the height of the outbreak of the COVID-19 panic.

After watching the pandemic’s effect on the supply chain across the country and even his own construction company, Mudgett began to worry about food scarcity, leading him to take a crash course in everything mushrooms.

“With the pandemic and just seeing the grocery store shelves clearing out, and everybody’s worried about whatever they’re worrying about, I just figured that with mushrooms, you can grow a super large amount of food in a really short amount of time,” Mudgett said.

With a copy of Paul Stamets’ “Growing Gourmet and Medicinal Mushrooms” and a small catalog of Youtube videos, Mudgett began converting the greenhouse on his property into a mushroom farm.

His first idea was to start a charity called “The Hand That Feeds,” which would focus on growing mushrooms to feed the hungry in the local area. While the charity is still a work in progress, Mudgett created Ozark Mountain Mushrooms to bring in revenue after work for his construction company dried up.

A full two years later, Mudgett has a separate grow lab and two grow tents on his property, allowing him to produce 19 different strains of mushrooms and up to 100 pounds of mushrooms in a month.

“I could probably grow 100 pounds a month if needed,” Mudgett said. “I’m just now getting to where the stuff that started after finishing the lab is now making its way to here.”

Ozark Mountain Mushrooms can be found in various locations around Mountain Home, including The Fork, the Truck Patch, the Cotter Bridge Market, Nature’s Way Natural Health, and the Teaze Hair Salon in Yellville.

Both Mudgett and his wife also produce their line of mushroom jams and teas, including Mushroom Macha Tea, a Chi Macha Latte, and Reichi Cocoa. They also sell 12-pound kits for $40 and three-pound kits for $20.

They even have a coffee line featuring an Immune Boost coffee blend and a Brain boost coffee blend created from a mixture of mushrooms for $13. Cotter Bridge Market serves their coffee out of its small ice cream shop.

“Now that everything is finished, it’s definitely a viable way to make a living,” Mudget said.

Mudgett said that while growing mushrooms is a risk because of mold and infection, he’s managed to climb his way to a 90% success rate during his grow cycles.

After the spores are allowed to grow in a petri dish, Mudgett begins the process of moving those spores to a growth jar, where there are carefully cultivated until they can be transferred to grow bags that are filled with everything from sawdust and water, to manure, to straw and wood pellets.

Mudgett said his best success in growing has been with a sawdust and water mix. He also said that he’s prone to using wood logs or dowels from time to time.

While classically lumped in with vegetables, mushrooms, which are fungi, are more akin to animals than plants, breathing oxygen rather than CO2. Mudgett said mushroom’s CO2 production could be harnessed to help grow other crops, a move that he might be making in the future as time goes on.

“I do have some green teas, and I’m doing Yaupon, which is another native tea,” said Mudgett. “Then it’ll probably be like tomatoes and greens. I’ll probably set up a hydroponic or aquaponic set up as I get money coming in from this.”