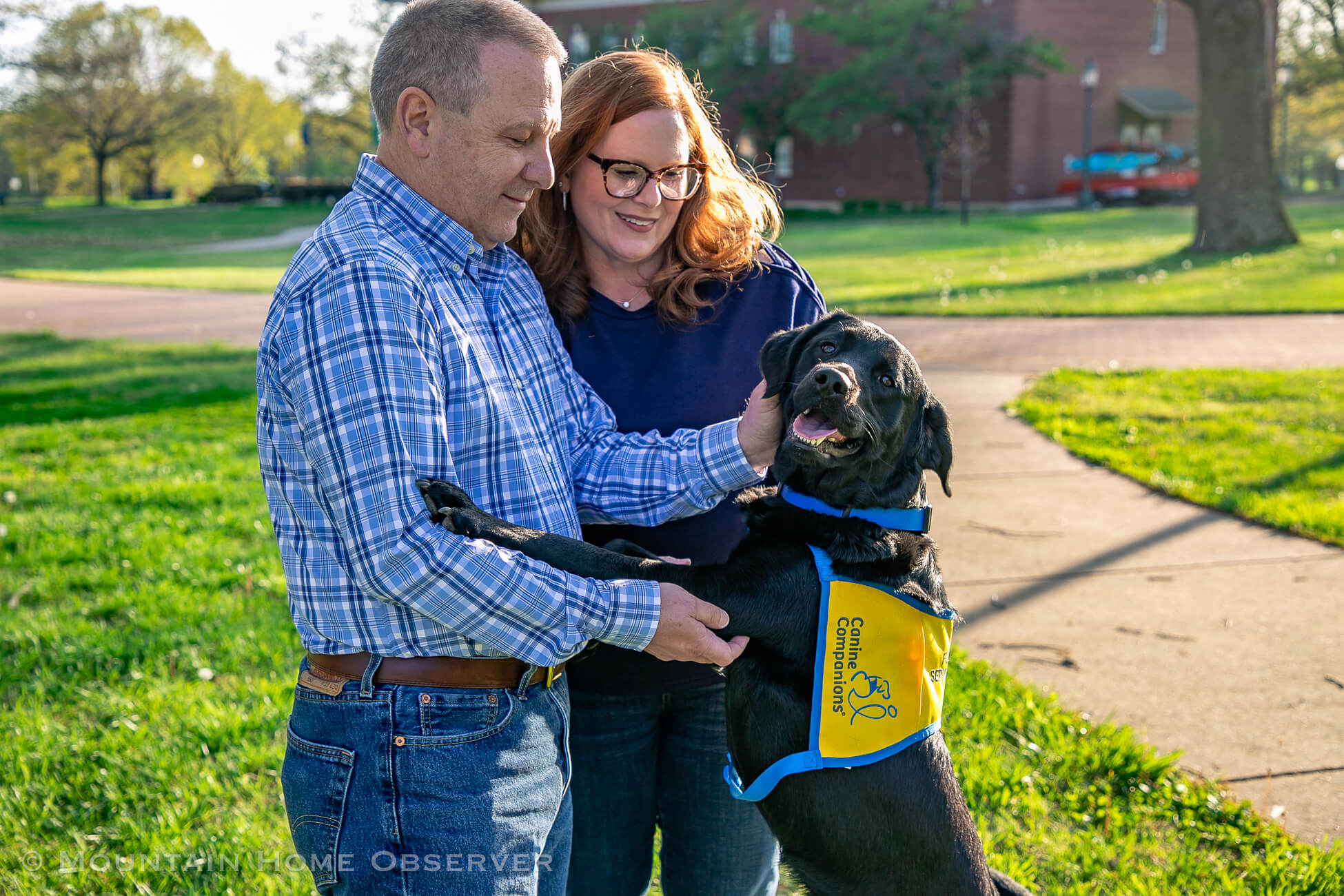 One of the hardest things you can do in life is saying goodbye to the family dog, which is why we should all show our support for Matt and Michele Paden of “The Paden Pack” as they send their sweet puppy, Roxy V, on to the next training stage of her life.

Roxy V, a service dog in training with Canine Companions, left for Irvin, Texas, yesterday after spending a year and a half under the care of the Padens.

If she passes Canine Companion’s “Puppy College,” she will then be registered as a full-fledged service dog and be rehomed with an individual in need.

“One of the great things about this organization is they provide service dogs free of charge to people with qualifying disabilities,” said Michele Paden. “When it’s all said and done, these dogs are highly trained service dogs, and they’re worth between $50,000-60,000, and they’re a gift to the recipient. They give them companionship and a gift of independence.”

The concept of service dogs for people with physical disabilities began with Canine Companions in 1975 in a home office and a garage in California. Today, the training service has expanded to become one of the largest service dog organizations in the world and boasts six training centers across the United States.

Roughly one in four Americans are in need of a service companion, and Canine Companions provides them to children, adults, and veterans with disabilities free of charge.

Each dog from Canine Companions is bred from dogs that have been through the program’s training college. Dogs receive their names based on the alphabet letter assigned to each litter.

After volunteers receive some initial training on what is expected of them, they are then introduced to puppies before taking them home to train them before entering “Puppy College.” The Padens received Roxy V when she was around two months old and have been responsible for paying all of her expenses, including food, bills, and vet costs.

“We’re responsible for loving her and taking care of her through potty training and socialization,” Michele Paden said. “You know, being consistent, making her mind and teaching her commands.”

If Roxy V completes her full training, she’ll understand over 40 commands and be able to assist people with turning on lights, opening doors, and retrieving items from drawers. If she is unable to complete her training, she will be looked at for other forms of training, such as bomb-sniffing and police work. If those other programs do not work out, Roxy will be examined to see if she can potentially become a breeder before being sent to a forever home.

The Padens began their training adventure with Canine Companions in 2017 after their nephew Grant Pyle received his service dog, Waldie, from the organization. Pyle, who was in a car accident that limited his mobility in 2013, quickly bonded to his new dog.

After seeing how the organization affected Pyle, the Padens decided to give back to Canine Companions by volunteering to take on their first dog, Celene, who now lives with them full time after failing to make it through “Puppy College.”

“Celene was our first puppy in program that we trained,” Michele Paden said. “And we turned her in February of 2020 right as COVID was ramping up. Unfortunately, she did not make it. She was in professional training for about six months, and when they’re released, puppy raisers have the first choice to adopt them. So, we did adopt Celene, and she’s our forever pet now.”

Both Michell and Matt said the difficulty in parting with Celene as she left for training was amplified by the family sending their daughter off to college.

“I knew it was going to be hard,” Michele Paden said. “But it was harder than what I thought it would be. After turning in Celene and then taking our daughter to college, we were like, let’s just take a break for a while.”

After waiting for a few months, Matt told Michele that he wanted to continue caring for and training service dogs, which eventually led to their temporary adoption of Roxy V in December of 2020 after they took back Celene into their home.

“We got the phone call from them that we were getting Celene back the same day we took McKenzie to college. So that worked out,” said Matt Paden.

While Roxy V may be heading towards a new owner and family after training, the Padens will receive another opportunity to see her again at her graduation. After that, it is on Roxy’s recipient to maintain a relationship with her raisers if they wish to do so.

The Padens said this practice was not uncommon and that Waldie’s raisers still receive regular updates from Pyle.

“It’s kind of like your kid,” Matt Paden said. “You’re really happy, and you’re really proud of their accomplishment. And then you get to be the one that turns, that’s the next time you get to see them, and that may be the last time. There are a lot of puppy raisers that stay in contact, but that’s up to the recipient.”

If you would like to try your hand at raising a service dog or would like to look into receiving one, the Padens emphasize that finding a legitimate service like Canine Companions is the best thing to do.

Michele Paden said several trainers throughout the country are not truly qualified to train service dogs and that many people find themselves paying thousands of dollars on dogs that are poorly trained.

“Unfortunately, we have been contacted by people that have gotten into a relationship with people that claim that they can raise a service dog for them,” said Michele Paden. “Then they get the dog, and the dog doesn’t perform like it should, and they’ve wasted a lot of money because those people want their money upfront. Canine Companions never asks for money. You don’t have to pay to get on the list… we just want to educate people that there is an option to get a service dog and an organization that stands behind their service dogs.”