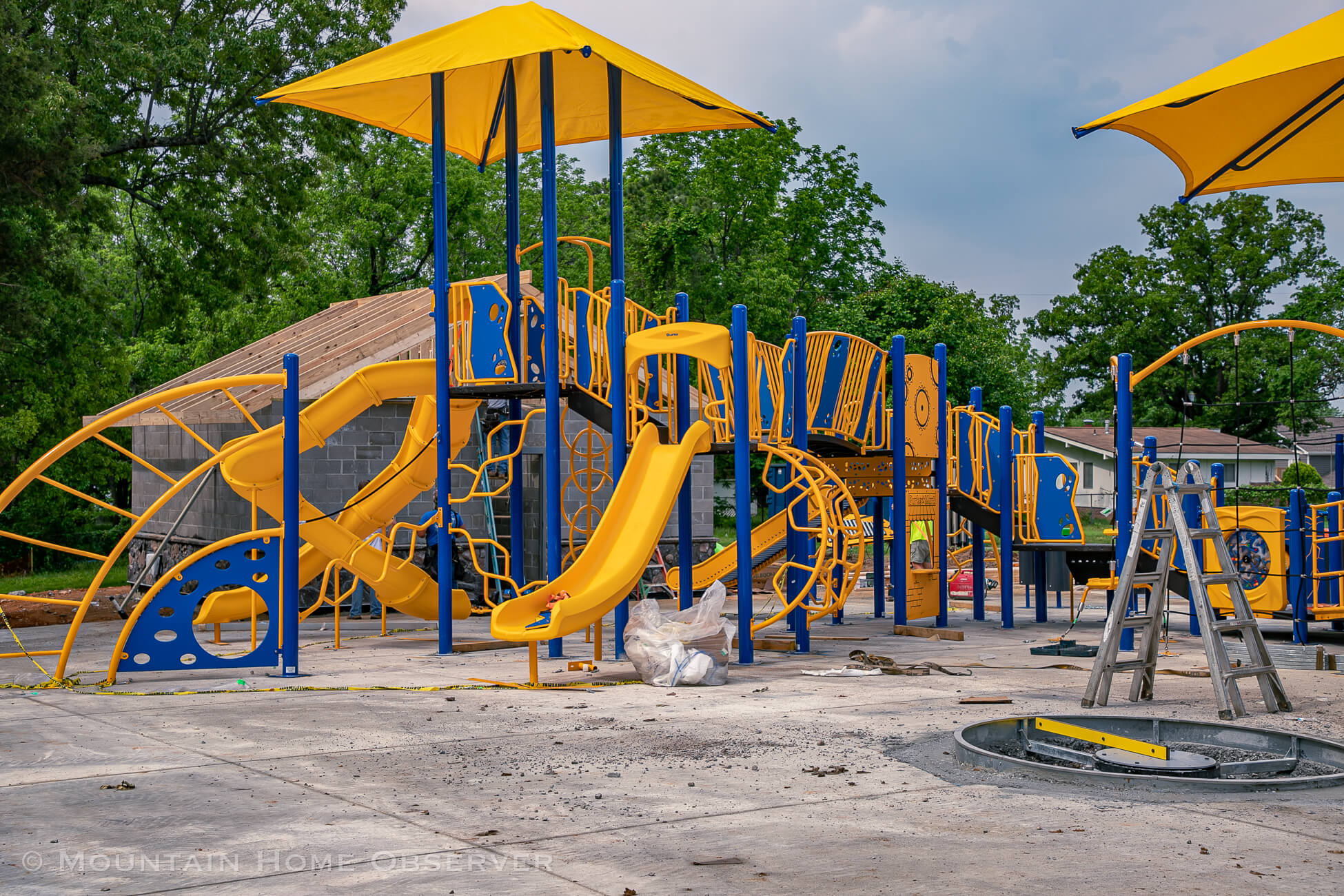 Mountain Home Mayor Hillrey Adams’s dream of building an inclusive playground for children with special needs is about to become a reality as crew members work to put the finishing touches on Hickory Park’s new playground.

The playground, which started being put together last week, is expected to be finished as soon as the end of the week if the weather permits.

“The equipment that’s going into the playground will probably be finished up this week,” said Mayor Hillrey Adams. “We’re not 100% sure, but if not this week, it’ll be finished up, we hope next week. It’s that close. You’ll be very impressed when you get up there.”

Construction crews have been working on completing several park projects around Mountain Home over the past few months. Most recently, Adams was able to re-open Keller Park after workers wrapped up a series of major renovations on the park’s ball-fields.

At Hickory Park, crews have installed a new ADA compliant parking lot and a new retainer wall for the park’s new playground. The playground itself is almost complete, with crews attaching a few remaining pieces of the ADA compliant jungle gym. A new ADA-compliant bathroom is also in the process of being completed, with crews working on completing its roof at the time of writing.

After construction is complete, Adams says crews will begin pouring the playgrounds pour and play surface.

Once completed, the park will feature a wheelchair-accessible jungle gym, modified see-saws, a music station, swings, barrier-free restrooms, and a barrier-free parking lot. The park’s baseball field will also be revamped to accommodate children with special needs. In future construction, a new terraced amphitheater-style seating arrangement will also be built on the hill below the playground facing the park’s Farmers and Merchants Banks Stage.

“Depending on what happens with the equipment, it could be in place by the end of next week,” Adams said. “We won’t put the pour and play down until we know that 100% of the equipment is in place and operational.”

In Oct. of last year, the mayor and city officials traveled to Little Rock to propose their $250,000 vision, the maximum amount, for Hickory Park to the Department of Parks, Heritage, and Tourism. The department awarded Mountain Home with the most money possible based on current funding levels.

The decision to try and build the park came about after Adams met with several groups in town who wanted to bring attention to the need for an ADA-compliant park for children with special needs. After the meeting, Adams was fully onboard and began seeking ways to get the project done.

“I’m very excited,” Adams said. “The only thing that will make me more pleased with this project is when I pull up there one day, and it’s covered up with kids enjoying themselves and their parents watching them instead of construction workers. I’m ready to see the kids enjoy it, and we’re getting very close. I can almost see what it’s going to look like now.”

Adams said the city plans to hold a special ribbon-cutting ceremony in the near future after the playground is completed.

“We’ll have an event,” Adams said. “We’ll most likely have a ribbon-cutting with some very special kids up there.”