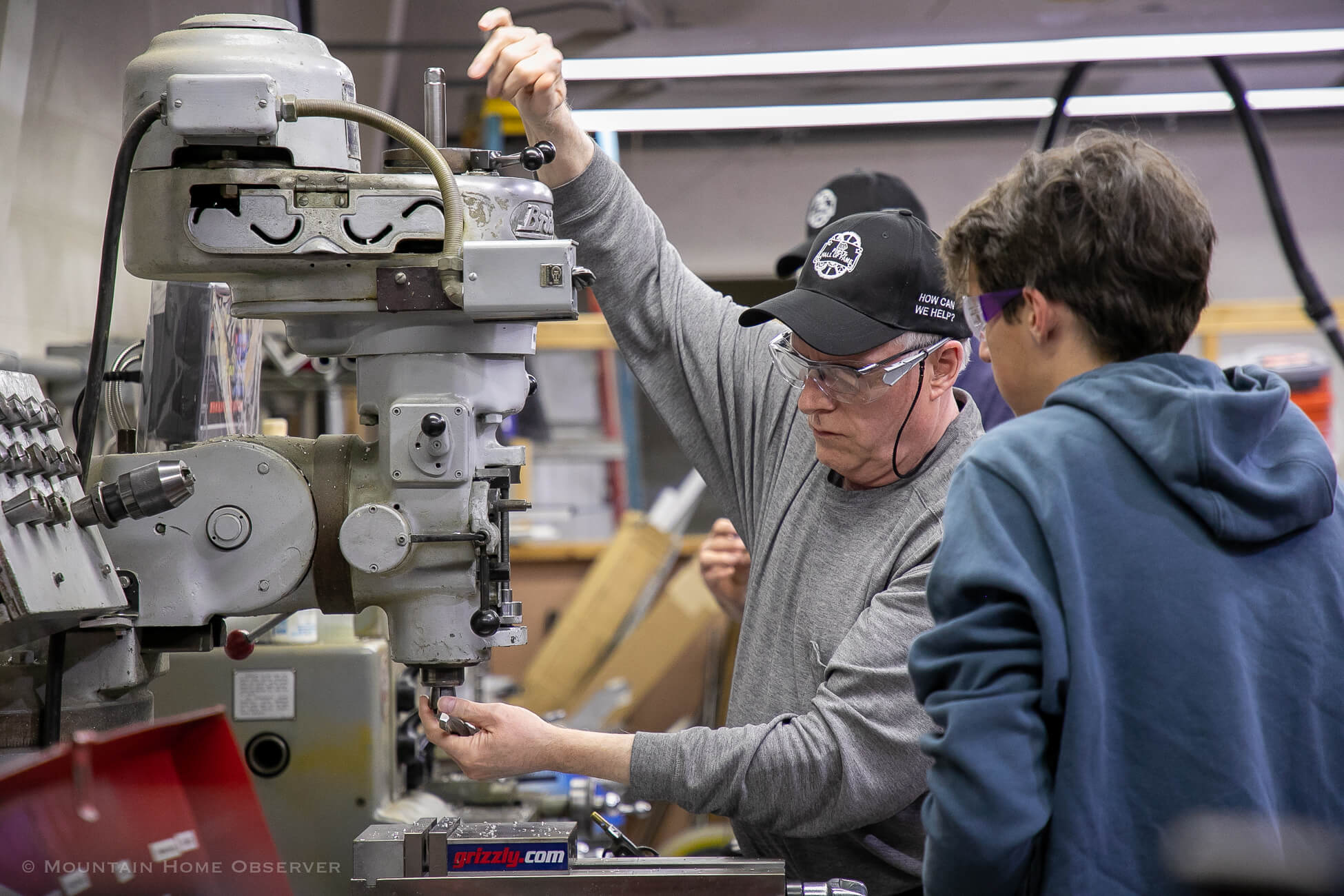 MHHS Bomb Squad to compete in Arkansas Regional this weekend

Mountain Home High School’s robotics team, Bomb Squad, is officially on the road again this weekend after spending the week preparing for the Arkansas Regional at Harding University in Searcy, Arkansas.

The squad is coming into the next competition fresh off the heels of ranking 4th in the Orland Regional they participated in earlier this month.

“We’re going to the Arkansas Regional, which is going to be held in Searcy, Arkansas, at Harding University,” said Kaylee Drake, Hall of Fame captain for Bomb Squad. “That will be from March 31 to April 2. There will be 20 teams there.”

For this season of the FIRST Robotics Competition, the Bomb Squad has been centered on building a robot around the theme of “rapid react,” which focuses on having students explore cargo and transportation solutions for the competition.

This year’s robot must be able to climb a set of bars and also be able to shoot balls into a funnel within 15 seconds autonomously. The robot can either aim for the top funnel, earning them two points per shot, or a larger funnel underneath for one point each. The squad has elected to go for the maximum amount of 10 points in the upcoming competition.

Work on the robot began in early January, with each student being required to participate in 100 hours of build time on the project. Many students like Trent Guthrie, who will be attending the University of Arkansas for a mechanical engineering degree, clocked in around 200 hours on the robot during this year’s competition.

“So, our robot can climb and shoot,” said Trent Guthrie, a senior member of the Bomb Squad who has been participating in MHPS’s robotics program since elementary school. “It picks up balls with the intake. We can only carry two balls, and they’re like huge tennis balls. We pick them up, and it’s gravity-fed to our shooter, and then we try to shoot the balls rapidly into an eight-foot-tall goal.”

The program, which Baxter International sponsors, was created to prepare young students to enter the workforce by having them be mentored by professionals like Kevin Beckham and Andy Marts, Baxter Health employees who have been mentors in the program since its creation in 1996.

“I was involved in the very first year, and then I moved away for five years, and then I moved back, and have been doing it since,” said Kevin Beckham, director of operational excellence and strategy at Baxter International. “I play a couple of roles. One of my key roles is developing a strategy for our matches. So, I work with our scouting team real closely to develop the strategy for pieces. I do a lot of scouting of other events that our competitors are competing in.”

In 2000, FIRST piloted its first-ever LEGO League in metropolitan cities across the US, instilling a drive amongst the students and mentors of the Bomb Squad to host an official league tournament. Despite being from a rural community, the Bomb Squad successfully negotiated a deal with FIRST to host one of the league’s seven tournaments for the year.

Following the deal, the team reached out to 310 schools in Arkansas and Missouri and invited them to participate in the upcoming tournament. They also offered 20 scholarships to help struggling schools with the financial cost of participating.

By the time of the tournament in 2000, the Bomb Squad had successfully managed to round up 55 teams. Since its inception, the squad has seen great success, winning the 2000 Championship Chairman’s Award and becoming a member of the FIRST Robotics Competition Hall of Fame.

“The confidence that you see grow in them from the first year to when they graduate is really unbelievable,” said Jackie Basinger, faculty sponsor for the Bomb Squad.

This weekend’s competition will begin tomorrow with the inspection day, in which students from each team help their competitors pass the inspection phase before proceeding to Friday’s qualification round.

Saturday will see the Bomb Squad enter the elimination phase of the Arkansas Regional.

“I did FIRST for nine years,” Guthrie said. “I did all of the lower level stuff like FIRST LEGO, all that stuff. I kind of built my way into it, plus my family, a lot of them are engineers. So, I like it.”