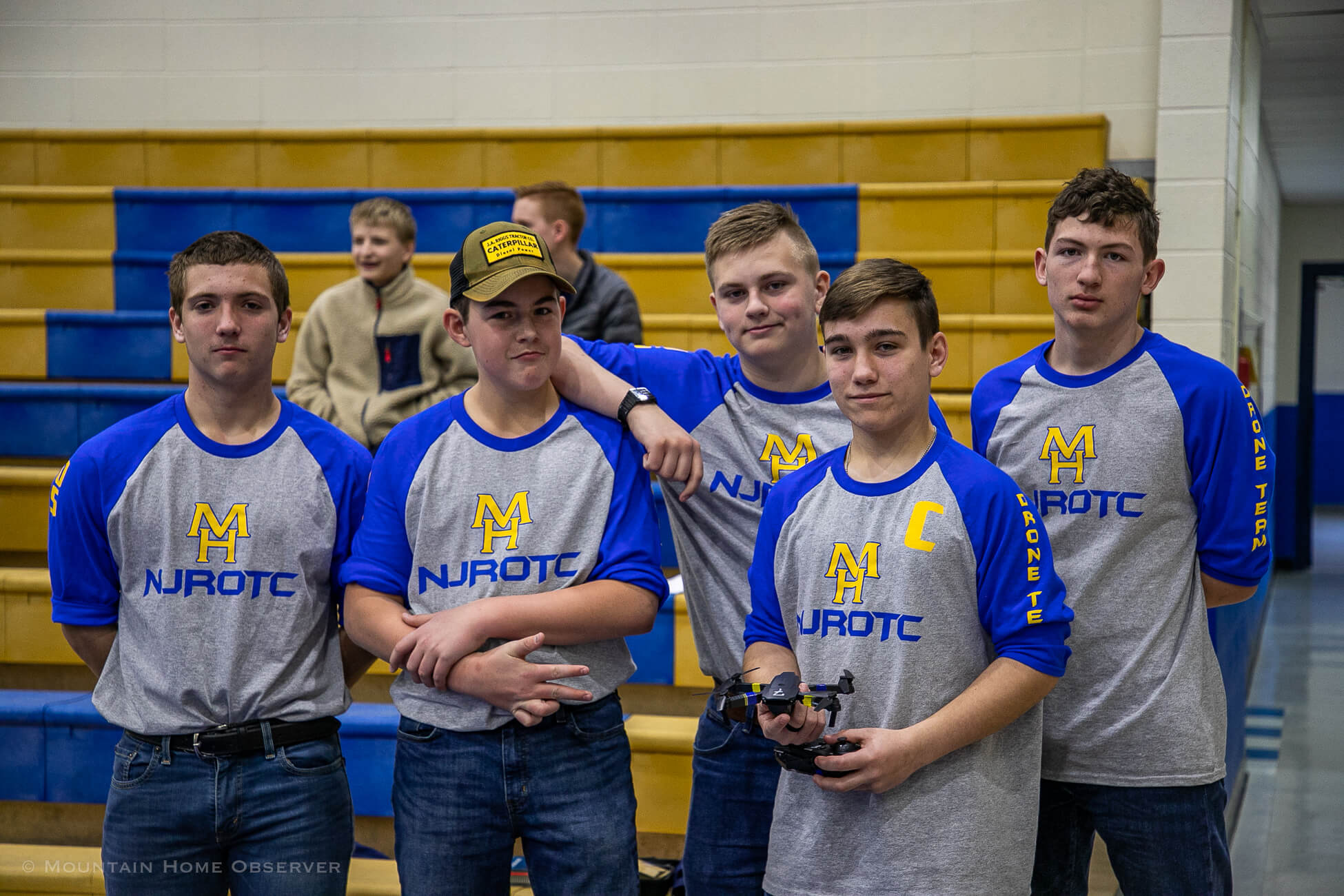 The competition is over, and the results are in at Mountain Home High Schools’ first annual Droneaggedon competition.

Alma High School wrapped up the Droneaggedon with a strong third-place finish.

“It went OK,” said Cadet Johnathon Mason, drone commander for MHHS NJROTC. “Someone put [the drone] in headless mode by accident, so that was difficult to fix, and then depth perception is another thing.”

The Droneaggedon competition is a part of a larger strategy to get young high schoolers interested in flying drones. Jason Williams, a former drone pilot who flew missions for the U.S. Navy and MHHS’s NJROTC instructor, seeks to have each cadet obtain their recreational and commercial drone licenses while in the program.

A commercial drone license could lead to students landing jobs in the $60,000 to $90,000 range after obtaining their license and graduating from high school.

Each team member on Mountain Home’s drone team has their recreational license, except for newcomer Justin Rula, who recently joined the NJROTC program. Mason is the first cadet in the program to earn a commercial license.

He also recently won a scholarship to attend the National Flight Academy (NFA) in Pensacola, Florida.

“There are a lot of jobs and employment opportunities in the field of aviation, specifically drones,” said Commander Merv Dial, NJROTC Area Nine manager. “A kid can graduate from Alma High School, and having attended NJROTC; he can go to work for an insurance adjuster, a real estate agent, or property surveyor. I mean, there’s all kinds of jobs that you can get just by having expertise in flying these drones. That’s what’s great about it.”

Students and parents filled the bleachers at MHHS as competitors whizzed their drones through various obstacle courses spread across the high school’s two gymnasiums.

“I’ve been following Jason since he started the idea, and I’ve been wanting to come up here and compete with these guys ever since,” said Jeremy Knott, NJROTC instructor for Camden Fairview High School. “It’s a great recruiting tool for the program.”

Those not watching the competition were treated to a $5 meal of nachos and pizzas before heading over to the U.S. Army’s booth at the front of the main gym.

The booth featured soldiers from the 5th Engineer Battalion from Fort Leonard Wood, who spent much of the morning and afternoon showing off the battalions EOD robot and RQ-11 Raven drones.

“We brought the TALON robot. It’s used for our route clearance company and helps clear explosives safely without using a human to do it,” said U.S. Army Major Darhower. “And then we brought the Raven Unmanned Ariel System. It’s just a reconnaissance system.”

Now that the first Droneaggedon has had its banner hung in MHHS’s gym, residents can expect the event to expand with new teams and events as the years go on.

“This is a first for us,” said Geoffrey Johnson. “We decided to come up here and get a feel for it because we usually host the Area Nine championship drill meet in Oklahoma City for the entire area. So this being an event, we just want to see how it’s run to bring it back to our unit. Jason’s got a really good program set up here, so we’re going to mimic what he has and start one of our own.”

Building a Culture of Reading