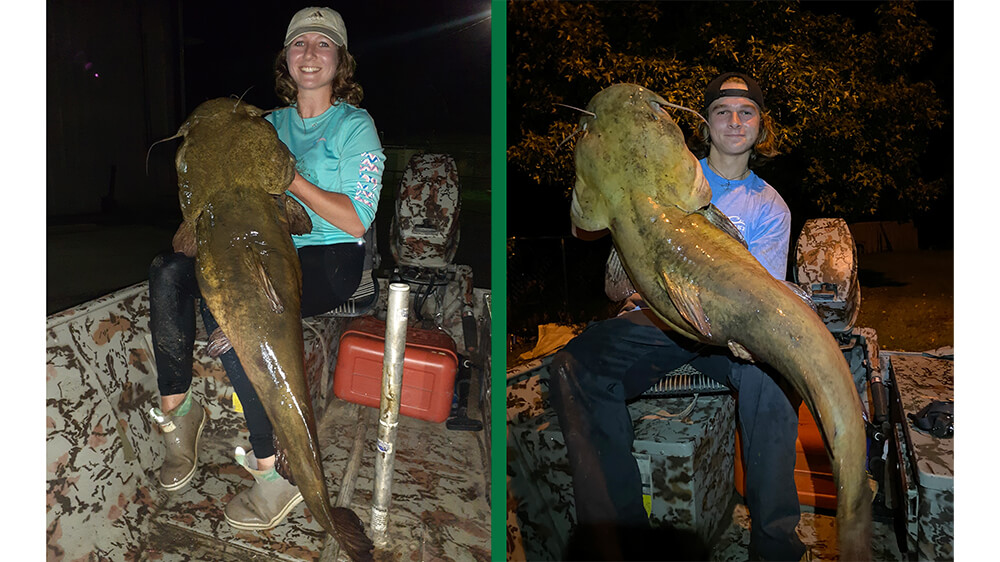 Haylee and Logan Applegate have had some amazing memories in Arkansas’s outdoors, but the brother-and-sister duo might have capped off a perfect summer two weeks ago with two of the biggest flathead catfish they’ve ever caught. According to their father, Roger, the two 50-pound flatheads the pair wrangled during a night-fishing foray on Lake Conway are far from the biggest fish swimming in the lake.

If you follow the Arkansas Game and Fish Commission’s Youth Shooting Sports Program, you might have noticed the Applegate name once or twice before. Logan was the 2019 Junior Division Champion of Champions and also scored a perfect 50 for 50 targets during the 2022 East Division Regionals with his Jacksonville team placing first in that regional level competition. Roger is a coach for the Jacksonville team; their involvement stemmed from Haylee’s interest in the program while she was in high school.

Coincidentally, Haylee’s experience with the AGFC and outdoors interests may have led to her current position in the Enforcement Division’s radio room in Mayflower, a stone’s throw from the family’s favorite fishing grounds.

Seeds Grow Roots
Roger’s work in the Air Force required him to move a few times during his career, but it was his time at the Little Rock Air Force Base in Jacksonville from 1996 to 2006 that fueled the fire for his family’s outdoor adventures.

“I spent a lot of time outdoors while I was stationed here, and really got familiar with the fishing, especially the flatheads on Lake Conway,” Roger said. “When I was close to retirement, we decided to move back.”

The family still enjoys bass and crappie fishing, both of which are outstanding at Lake Conway, but it was the giant flathead catfish swimming in the lake that grabbed Roger’s attention decades ago.

“I really started studying how to catch those bigger fish, the ones that would straighten hooks and snap trotlines while we were fishing,” Roger said. “I spent a lot of time on the lake and now I’ve got a system to target them that works. Last fall, Haylee and Logan wanted to hear some of the tricks I’d learned, and this summer they’ve been busy catching some of the smaller fish.”

Size is relative to Roger, who says he’s caught many fish in the 50-pound range and once had what he believes would top the state unrestricted tackle record (85 pounds, 6 ounces), up to the side of the boat for a brief moment.

“I pulled a little too hard on that jug and the hook tore out,” Roger said. “But I had it up to the boat long enough to feel confident it was in that 80-pound range.”

Fertile Waters
Will Lancett, AGFC habitat biologist in Mayflower, said the lake definitely has the potential to create massive catfish in addition to being one of the top spots for crappie in the state.

“Lake Conway is undoubtedly a premier destination for Arkansans to land a trophy flathead. When we survey Lake Conway, among other lakes, we see evidence in the way of passive gears (limblines and trotlines mostly) that people are targeting them, as well as angler reports that get sent in to us. We also get these kinds of reports fairly regularly at Lake Overcup and Harris Brake Lake.”

In addition to being extremely fertile, the seemingly endless supply of underwater snags and stumps in these AGFC lakes gives flatheads, in particular, a leg up.

“They provide great cover for flatheads to ambush prey from,” Lancett said. “Flatheads are also cavity spawners, which means they will burrow into any kind of hole or hollow tree that they can fit into to lay their eggs. This is likely the reason we see these good numbers and large sizes of flatheads in these lakes.”

Logan Applegate also speaks to the large amount of food the fish eat in these lakes.

“While we’re fishing at night, we’ll see tons of shad up at the surface,” Logan said. “They can get so thick that you can just dip your hand down and grab them sometimes.”

Baiting for Beasts
The Applegates don’t choose shad when chasing plus-sized flatheads. Instead their fishing trip starts with a fishing trip.

“We try to catch bream to bait up the hooks,” Haylee said. “And they can’t be small bream. We want bluegill or other sunfish that are at least the size of your hand. If we can’t manage to catch enough of those, we’ll buy black salties (a special type of goldfish) at Bates Field and Stream in Mayflower, but big bream are the best bait.”

It’s important to remember that all live baitfish must either be caught from the same waters where they will be used or purchased from an certified bait shop. Bringing bait from other bodies of water is a no-go, as it offers a chance for non-native species as well as diseases and parasites to spread to new bodies of water. It’s also important to remember that bream over 4-inches, the kind that the Applegates use, must be caught by hook-and-line before being used as bait. They can’t be caught by cast nets. Roger actually had some say in that matter during his first stint in Arkansas.

“The law used to read that no bream over 4 inches could be used as bait, period,” Roger said. “It was actually a law that was intended to prevent people from netting and keeping gamefish-sized bream and say they were only catching bait. I actually spoke at a Commission meeting years ago to plead my case that anglers after trophy catfish would put in the effort to catch the bream on sportfishing tackle if we could continue to use them as bait for our main target. And they listened.”

Supersized Setup
Bream as large as your hand may seem too big for bait, until you see the equipment the Applegates use when targeting these giant flatheads.

“These are giant fish, and you have to pay attention to the equipment you use if you’re going to catch them,” Roger said. “These fish didn’t get big by being stupid, and they know how to break any part of your setup that isn’t right.”

The Applegates employ jugs with lines suspended beneath to present the bream they’ve caught for flatheads. Unlike many of the pool noodle setups that have become popular for catfishing, the Applegates use gear that’s a little intimidating. Their “jugs” are much more like buoys, and they ditch the standard tar-coated trotline material in favor of slender one-quarter-inch diameter rope. A stout hook no smaller than size 10/0 is placed about three feet under the jug, and a weight dangles beneath to keep the presentation somewhat stationary until the strike.

“I actually got most of these hooks when I was stationed in Biloxi,” Roger said. “They’re sort of antiques now, but they’re sharp and strong enough to handle big fish.”

Logan adds that the pool noodle method is OK if someone is just fishing for smaller catfish with small bait, but they don’t hold up to the pull from the big catfish his family is after.

“You might set a few and then one turns up missing,” Logan said. “It may not have been someone stealing your noodle, but a big catfish that can take it down and keep it there until it breaks it off in a stump.”

Catch Them in Their Kitchen
Those stumps that collect catfish lines aren’t just a way the fish rids itself of wimpier tackle, they are the catfish’s home for most of the day. Flatheads are known to bury up in snags for long periods and take advantage of smaller fish that happen upon their den. But according to the Applegates, consistently catching the larger fish means fishing where they feed when they leave their daytime homes.

“I always tell Haylee and Logan, you have to catch them in their kitchen,” Roger said. “These are the biggest predators in the lake, so you have to think a little different than the crowd if you’re going to catch one.”

With Lake Conway averaging only 4 feet deep, the Applegates keep most of the bait suspended shallow.

“Predators look up to feed,” Roger said. “So our hooks are only a few feet below the surface. When it gets dark the catfish will come up to get the bait.”

Although it’s legal to leave jugs unattended at night, the Applegates keep watch over their setup, fishing from sundown until about midnight, sometimes later if the fish are biting.

Haylee said they’ll watch and keep count of their jugs, which are rigged with reflective tape, and when one is missing they immediately start searching.

“They’ll still pull the big jugs we use around and even under the water for a little bit,” Haylee said. “You don’t want them to be able to get it tied up in stumps or lily pads, so you need to keep an eye on it when you see it pop back to the surface.”

Fighting these fish is a lesson in chaos. Pulling too hard will pull the hook free, so when the fish surges, they release the rope and let the jug continue to do its work, wearing down the giant.

“You can hear the jug bouncing along the bottom of the boat and then see it pop back up on the other side sometimes,” Haylee said. “Then you have a struggle getting those big ones into the boat. It’s about as exciting as fishing gets.”

Keep it Clean
With the money and effort the Applegates have invested in their jug-fishing setups, they keep a close eye on them, but Lancett warns that other anglers are not so tidy.

“Lake Conway and some other lakes in central Arkansas have had some problems in the past with people leaving out limblines, yo-yos and jugs instead of picking them up when they’re done with their angling day,” Lancett said. “These passive fishing are great to catch catfish for a fish fry or fun, but we want to make sure everyone picks them up and takes them home when they’re done with their fishing trip.

“I have personally removed ducks, herons, and turtles off of abandoned yo-yo’s, limblines and trotlines,” Lancett said. They can get tangled in trolling motors and boat propellers, and they can be a hazard to swimmers and boaters as well. They’re a great tool to harvest fish and enjoy Arkansas’s Wildlife, but just like any fishing or hunting gear we need to be responsible to ensure the lake is as good as we found it for the next angler.”

“Maybe,” Roger said. “I know there are bigger than the two Logan and Haylee caught this summer, and I bet they prove me right.”

Priorities for the 118th Congress