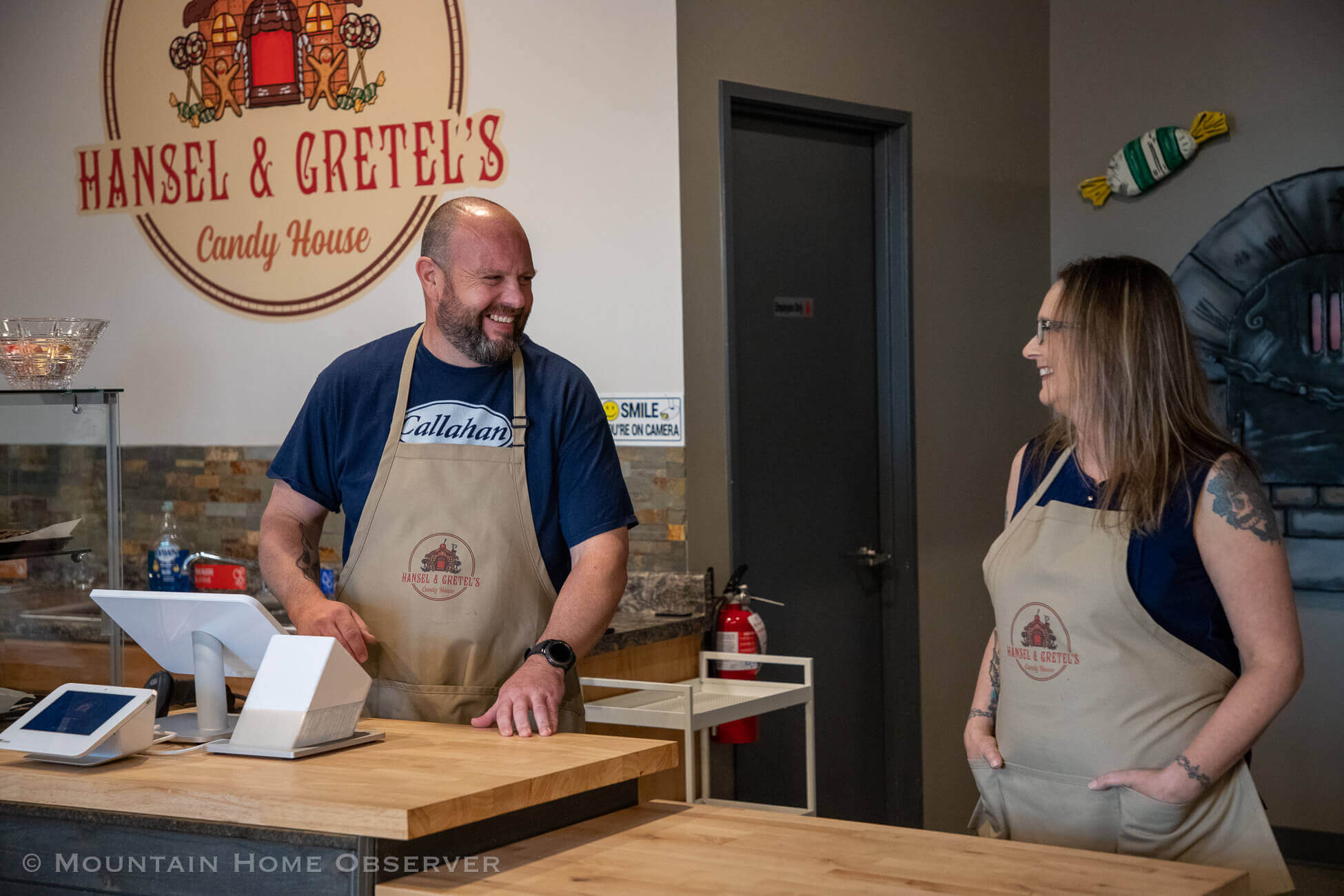 When it comes to tales of adventure and candy, it’s hard to beat the Grimm brother’s classic Hansel and Gretel.

The fairy tale is a simple but dark one.

A new stepmother convinces her husband to abandon his children in the woods so that they can survive the famine that has fallen upon their sleepy village. From there, the children are left out in a dark forest to fend for themselves before they come across an ancient cannibal witch with a house made of gingerbread and candy.

Thankfully, Gretel is a little too bright for the witch and quickly finds a way to kill the witch before brother Hansel becomes that night’s dinner dish.

It’s a fun story that has captivated candy eaters and children since it first came out in 1862. And now that tale of candy and wonder has come to Mountain Home, minus the evil witch, thanks to Brian and Amy Daugherty’s Hansel and Gretel’s Candy House.

“The biggest part we looked at with the theme is that it allowed us a relatively easy theme for the store. Something that was playful. Something from our childhood,” said Brian Daugherty, owner of Hansel and Gretel Candy House.

The journey to Brian and Amy opening their very own candy shop in Mountain Home began with COVID-19 and an interest in chocolate art.

Brian, who was a manager at the Baxter County Airport, found himself with some extra time on his hands after contracting COVID and began to bake cookies and sculpt chocolate, largely inspired by Netflix’s “Nailed It” series, while waiting to return to full health.

An avid home artist, Brian said he enjoys drawing and sculpting and found that the techniques he had learned by practicing art, quickly transferred over into the world of baking.

“When I was sick, I had time to do things, but I was still stuck at home,” said Brian. “I was doing a lot of cookies along with baking, and there were certain things that we found that transferred over. And as I was doing that, I started working with modeling chocolate and started to learn techniques. You pick things up, and I really enjoyed it because I enjoyed sculpting and chocolate.”

With a new pastime under his belt, Brian continued to create his chocolate masterpieces for friends and family until an idea struck both of the Daugherty’s as they visited candy stores in Branson and Hardy.

What if they cut out the drive to Branson for people in Mountain Home by opening their own candy shop?

“I mean, what do we do when we go to Branson,” Brian said. “I mean, we go to Kohls. We go eat at particular restaurants, which you’re not going to get here. We go to Branson Landing, where you go to Bass Pro, and you’ve got all your shops there. And we always go to the candy shop.”

The idea stuck, and three months later, after several long nights renovating their storefront, they opened their doors on July 1 and haven’t looked back since.

“It’s fun to see, especially the parents, you know, when they bring their kids in,” Brian said. “Even the elderly, when they look, and they see the little things like, we got the little cage with the chicken bones that Hansel was using because the old witch was blind.”

Nestled next to Carter’s Jewel Chest in Mountain Home, the Daughtery’s candy shop is truly something to behold.

A witch’s oven burns in the back of the store, waiting to be filled with plump children seeking candy, while chicken bones sit on display on the store’s main counter. The back wall is painted to mimic a shadowy forest, drawing parents and children in for photo ops.

Posters showing the events of the Grimm Brother’s popular tale line the upper walls, walking residents through each scene of the story.

And while the building may not be built out of gingerbread, candy, both chocolaty, sweet, and sour, lines the walls of the store, beckoning guests to come in and fill up on their favorite treats.

“It’s nice to see people walk in with a smile on their face when they look in and see all the jars,” Brian said. “It takes them back to a piece of their childhood, or they find a piece of that candy or something that they haven’t seen in years.”

Hansel and Gretel’s Candy House features various chocolates and hard candies. For those looking for their chocolate fix, the left side of the store features a full chocolate and fudge wall filled with popular treats like snowballs, peanut clusters, and the ever-popular Tiramisu Cordial, which flies off their shelves at breakneck speeds. The store keeps around 200 pounds of chocolate stocked at one time, with over 20 fudge flavors.

Sugarless chocolate treats are also available for diabetics or those looking for a slightly healthier option. Bulk chocolate can be bought for $9 per half a pound.

New chocolates and candy are rotated in on a weekly basis.

“It’s amazing the amount of variety that’s out there,” Brian said. “It’s hard, we would love to have everything for everybody, but you can’t do it. It’s not that we can’t do it. It’s that I don’t have room for it.”

While the chocolate wall will scratch the chocolate itch in no time, those seeking hard candies of the sweeter variety can gander over to the other side of the store, where they’ll be treated to real Mike & Ike’s, flavored popcorn, buffalo wing soda, and more.

There’s also a section for retro candy, including the infamous candy cigarettes from years past, as well as sections devoted to Harry Potter candies, Japanese candies, and European candies.

Bulk sales for hard candies run $7 per half a pound. Be sure to separate chocolates from hard candies before purchasing to avoid being charged the more expensive chocolate prices.

“Some of the European stuff I’ve gone through a lot,” Brian said. “I had a lot of Milka bars, and they’ve sold very well because they’re actually the real German bar.”

While the Daugherty’s are currently working with a distributor to bring in candy to Mountain Home, Brian said his goal was to eventually start creating his own chocolates and candies in-house, though on a limited scale.

He also said that he would begin selling some chocolate art and other decorative designs after the business finds its feet.

Hansel and Gretel’s Candy House is open Monday, Wednesday, Thursday, Friday, and Saturday from 10 a.m. to 7 p.m.,  and Sunday from 11 a.m. to 4 p.m. The store is closed on Tuesday.

How to fight inflation through year’s end