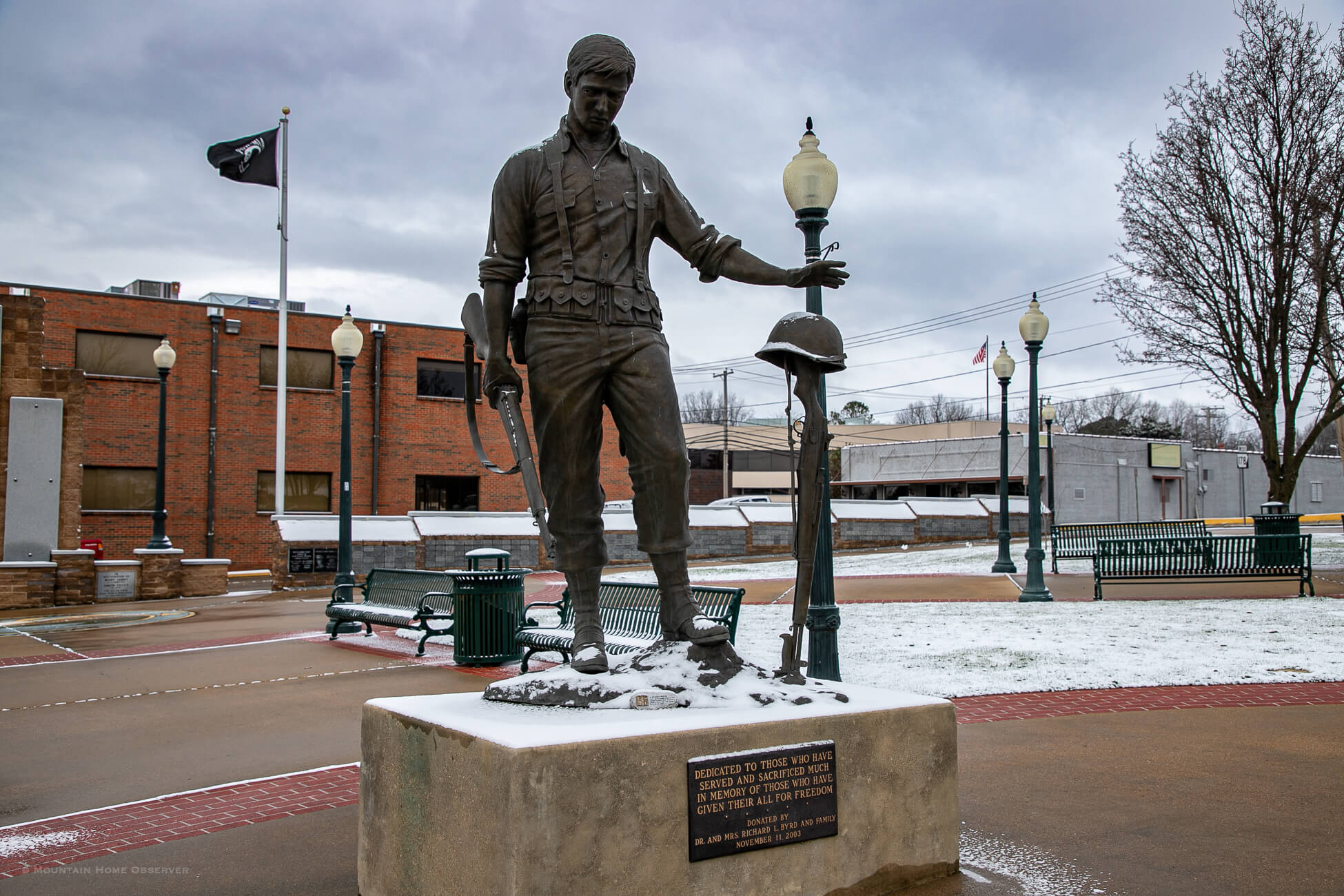 Mountain Home’s Veteran Plaza received some upgrades Wednesday as the city works to expand the plaza’s sidewalks and pour the footing of the city’s upcoming 9/11 memorial.

The memorial, which will feature a piece of steel from the World Trade Center’s Twin Towers, is slated tentatively to be unveiled on Memorial Day.

“There’s not that many places in Arkansas and the United States that have actual steel from the Twin Towers,” said Tommy Felicia of the Mountain Home Fire Department. “There are only around 300 places, and in Arkansas, I think we’re going to be the fifth or sixth.”

Mountain Home Mayor Hillrey Adams said the sidewalks were being expanded to protect the plaza’s grass from being disturbed by trucks bringing in displays and stages for the city’s many events.

Workers also took the time to pour the footing for the 9/11 memorial in preparation for its installation. However, Felicia and Cheri Smith of the Henderson Fire Department, who oversees fundraising for the monument, are still working to raise the remaining $6,800 needed to pay for the memorial’s installation.

“We’re a little shy of $7,000 for the monument raising,” Felicia said. “My goal is to have it for Memorial Day. We’ll have a big reveal up there, but it will just go off of if we have it funded by then. We have a couple of fundraisers scheduled for the Spring—a couple of outdoor events. I’ve got a couple of poker runs scheduled, and I’m thinking about doing a gun raffle.”

The city’s 9/11 memorial came about after retired FDNY Captain Joseph Russo presented Mountain Home with a 50-pound piece of steel on behalf of the FDNY during last year’s 9/11 ceremony marking the 20th anniversary of the single largest terrorist attack on the United States.

Steel from the Twin Towers is managed by the FDNY and has become difficult to obtain, as much of the remaining steel has already been used for other memorials or worked into the hulls and frames of U.S. Navy ships like the U.S.S. New York.

Mountain Home’s 9/11 memorial is expected to cost around $15,000, with free labor for the installation provided by Bill Wikoff of Springfield, Illinois.

The memorial will see the steel suspended between two 6 foot tall concrete pillars designed to look like the Twin Towers. The foot of the base will feature the words “Never Forget,” while the date of the attacks will be displayed on the side of the memorial. The memorial will also include a silhouette of the Pentagon and the number 93 to represent flight United 93.

A plaque with information pertaining to the events of 9/11 will also be installed.

The 9/11 terrorist attacks were a defining moment for the United States, which would launch the War on Terror mere months after the dust of that day settled.

On the morning of Sept. 11, 2001, thousands of Americans lives ended after terrorists hijacked four commercial passenger planes and crashed them into both towers of the World Trade Center, the Pentagon, and a field in Shanksville, Pennsylvania.

Altogether, almost 3,000 people would lose their lives, including the first responders who rushed headfirst into danger to try and save those trapped inside the Pentagon and the Twin Towers.

The passengers onboard United 93, which crashed in Pennsylvania, heroically stepped forward and fought their hijackers in an attempt to regain control of the plane. The plane would crash in a field due to the struggle inside of the flight’s cockpit.

The death toll can still be felt today as many of 9/11’s first responders are still suffering and dying from illnesses resulting from that day.

If you would like to donate to the completion of Mountain Home’s 9/11 memorial, please call the Mountain Home Fire Department at (870) 425-2611.