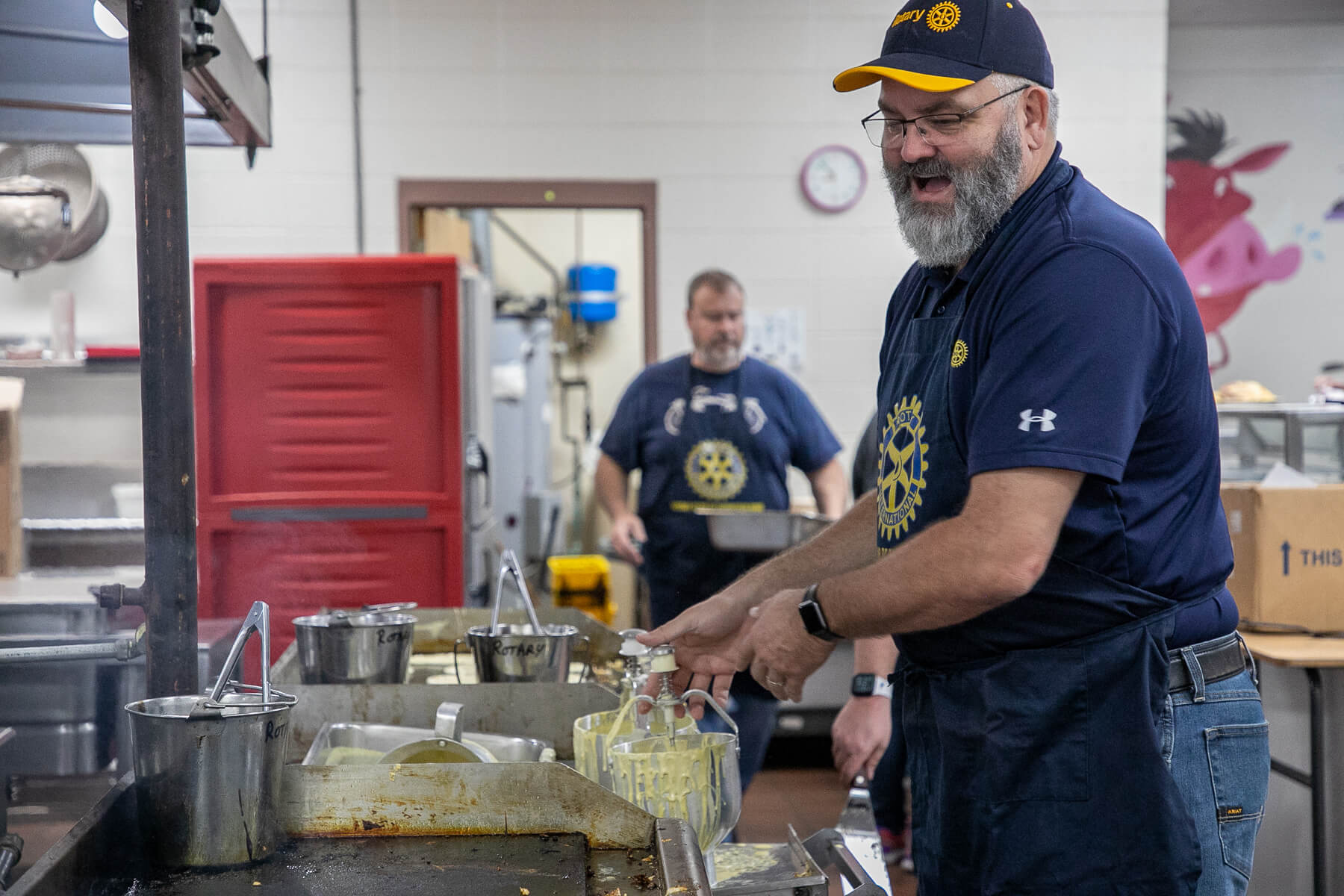 The Mountain Home Rotary Club took to the kitchen and continued its decades long tradition of hosting its Annual Pancake Breakfast with Santa for residents Dec. 4 at Mountain Home High School’s cafeteria.

This year’s Pancake Breakfast featured a visit from Santa Claus himself as the Rotary Club joined First Security Bank and the Mountain Home Chamber of Commerce in the city’s Christmas festival for the first time.

The club’s annual breakfast fundraiser traditionally falls on the last weekend in Oct.

“Santa is hopefully going to be the tradition moving forward with the Chamber and with their parade,” said Wes Wood, president of the Mountain Home Rotary Club.

The breakfast ran from 7 a.m. to 11 a.m. and offered residents a chance to sit down with family and friends while enjoying freshly made pancakes and sausage patties. Hot coffee and orange juice were readily available and in high demand as hundreds shuffled through the cafeteria’s line through the day.

Tickets to the breakfast cost $5 per person.

Money raised through the breakfast is used for scholarships for Baxter County area high-school seniors. The Rotary club typically raises between $15,000 to $20,000 from its breakfast every year.

“You know, the more tickets we sell, the more scholarships we can have,” Wood said.

The Mountain Home Education Foundation’s Promise Scholarship is one of the main scholarships the Rotary Club donates to each year. The scholarship is designed to cover any gaps in funding that local high school students need to attend campus at Arkansas State University – Mountain Home.

This year’s Christmas festival shake-up came about after the Mountain Home Chamber of Commerce reached out to the Rotary Club with the idea of using Santa to drive up numbers.

“We were looking for fun and creative ways to add to the Christmas Festival,” said Dani Pugsley, president of the Mountain Home Chamber of Commerce. “We thought, why not combine the two events and bring Santa from the parade to have breakfast with the kids on Saturday morning.”

Back in the kitchen, it was all hands on deck for the Rotary Club, with members of the club’s 61 strong roster taking shifts in cooking, serving and doing dishes. The sounds of sizzling sausage and the smell of fresh pancake batter filled the industrial kitchen as members greeted each guest before pouring them a cup of coffee and filling their plates with food.

Service to others is often listed as the best reason for joining the club. For Rotarians like Sam Rhoades, the annual breakfast was a perfect way to serve the community back when he and other Mountain Home Rotarians adopted the tradition for the club back in 1976.

“Nineteen seventy-six was our first year,” Rhoades said. “The Rotary Club in Eaton, Ohio, had been using the pancake day as a major fundraiser in their scholarship program, and so we imported it down here. Prior to 1976, the Rotary Club was doing barbecue chickens on the Mountain Home square on the Fourth of July.”

The Rotary Club sells roughly 4,000 tickets per year for its pancake breakfast. Each club member is expected to meet a quota for tickets sales, with many purchasing any remaining tickets left out of pocket.

“It went very well,” Pugsley said. “When we were there, there was good traffic, and everyone was pleased with the turnout.”

Dave says: Where should he park the money?