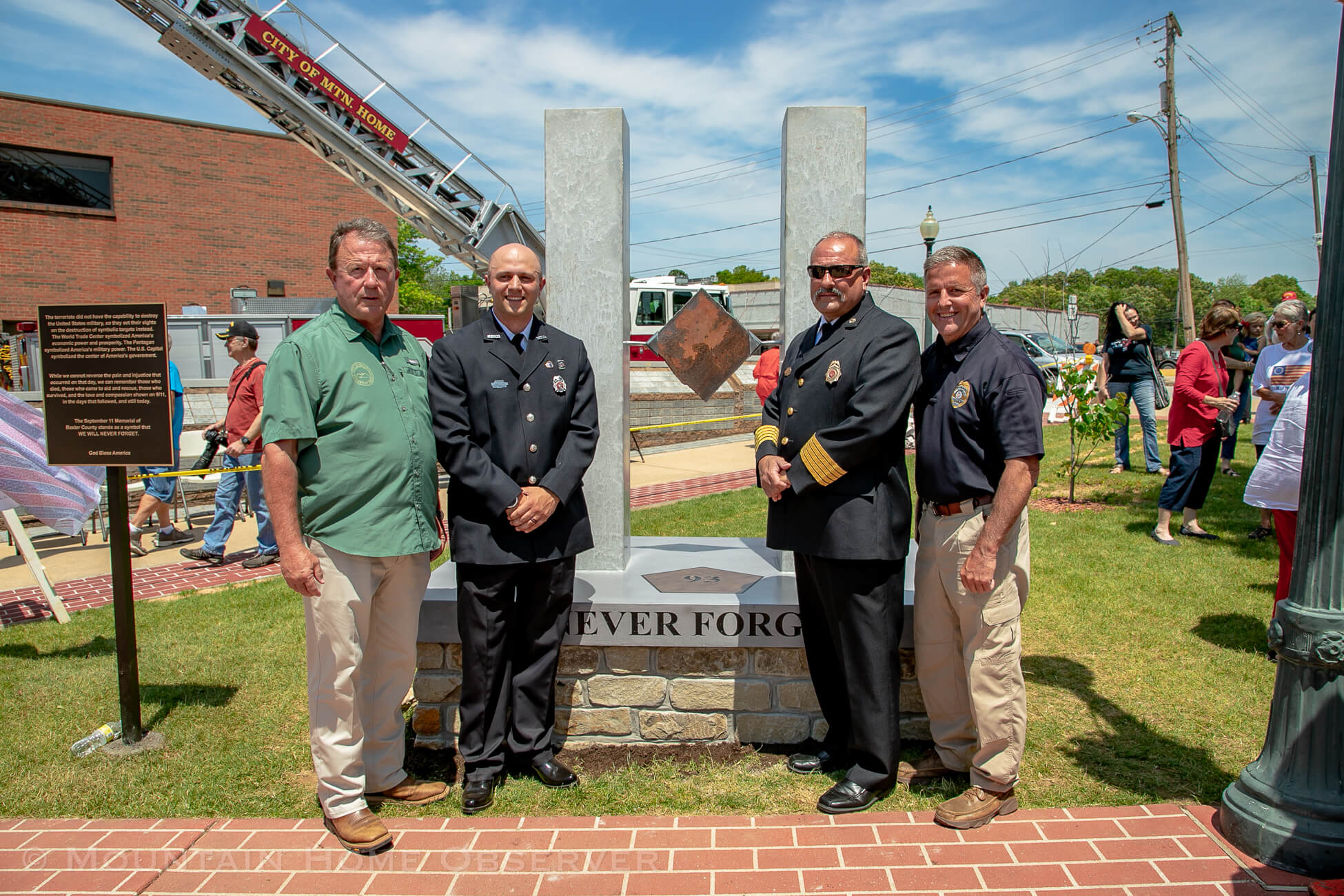 Another 9/11 anniversary has come and passed.

Yesterday, marked the 21st anniversary of the 9/11 attacks on the United States of America, which resulted in the deaths of 2,977 Americans and the destruction of the Twin Towers, a portion of the Pentagon, and United Airlines Flight 93.

And while Mountain Home may be thousands of miles away from New York City, a piece of that tragic day now resides in the heart of the city, thanks to a new memorial that was brought about as a joint effort between Mountain Home Firefighter Tommy Feliccia and his uncle, retired FDNY Captain Joseph Russo. The new memorial was unveiled during Memorial Day of this year.

Yesterday marked the memorial’s first observance of 9/11 and the events of that day.

The memorial, which is on display in Veteran’s Plaza, was built by Bill and Jenn Wikoff of Concrete Living in Springfield, Illinois. The design for the memorial is based on a sketch by Feliccia.

“This memorial is the only one in North Central Arkansas,” said Feliccia while dedicating the monument to Mountain Home back in May. “The memorial to the left of the stage, which will be unveiled shortly, is the symbolism of the things the terrorists attempted to destroy. The Twin Towers was our economic power. The Pentagon was our military power, and the U.S. Capitol was our government.”

Mountain Home’s memorial features a piece of steel from the Twin Towers suspended between two 6-foot-tall concrete pillars designed to look like the Twin Towers. The foot of the base features the words “Never Forget,” while the date of the attacks is displayed on the side of the memorial. The memorial also includes a silhouette of the Pentagon and the number 93 to represent flight United 93.

A small memorial to Vincent “Vinny” Feliccia, Russo’s brother-in-law and former New York City firefighter, has been etched into one of the towers. It is mirrored by a dedication honoring Russo’s contribution to the memorial.

A plaque with information pertaining to the events of 9/11 is now also on display.

“It’s hard to find the words to describe the feeling that came over me, observing the total destruction that was covering many multiple city blocks,” said Russo during his 9/11 Memorial Speech in 2021. “I had driven out of these streets earlier in the day, and everything looked normal. What I now observed was a moonscape of twisted steel, pulverized concrete, smoke, dust, and the smell of burning fuel.”

Altogether, almost 3,000 people were killed during the attacks of 9/11. Of those who died, 2,606 were from the World Trade Center alone, with an additional 125 being killed at the Pentagon. Two hundred and fifty-six people were killed aboard the hijacked planes that morning.

The remaining 470 deaths belonged to first responders and members of the military. Three hundred forty-three firefighters and 72 police officers died after the Twin Towers collapsed in New York City. Fifty-five members of the armed service would die after the third plane struck the side of the Pentagon.

More than 256 firefighters have died from their exposure to ground zero.

“The dust created when the towers collapsed covered every person and every surface, in some places with several feet thick,” Russo said when announcing the creation of Mountain Home’s 9/11 Memorial in 2021. “As I entered the site, an EMT handed me a filter mask and insisted that I keep it on as much as possible. I owe that EMT a debt of gratitude.”

Russo was a dedicated firefighter who lost many of his good friends on that September morning. While he was here in Mountain Home last year, Russo wanted to make sure that his friends and brothers were remembered as the heroes of that day.

He insisted that their names be listed in dedication to their heroism.

Before the collapse of the Twin Towers, Orio J. Palmer discovered that one of the radio repeaters that allowed firefighters to communicate over long distances was not functioning after being ordered to surveil the South Tower.

In the chaos of that moment, Palmer fixed the repeater before turning his attention to those trapped in the lobby elevator.

As a trained elevator mechanic, Palmer got the elevator moving again, freeing those trapped inside before riding it to the 41st floor, where he began helping the injured. He would reach the 78th floor of the tower before it collapsed.

While in the tower, he was heard giving regular reports across the radio before going silent for the last time.

Joseph J. Angelini Sr., who died alongside his son Joseph Angelini Jr. while attempting to help those inside the Twin Towers.

Frank Palombo, a father to 10 orphans.

Timothy Stackpole, who donned his suit for the last time and headed into the smoking building despite being injured from a previous fire.

Terence Hatton, whose wife did not discover that she was pregnant until his wake.

Daniel J. Brethel, who trained Russo as a captain.

Captain Patrick Brown, one of the FDNY’s most renowned firefighters.

Ronald Bucca, who climbed to the 78th floor of the South Tower only using the stairs.

The Vigiano family lost their two sons, John Vigiano Jr., a firefighter, and Joe Vigiano, an officer with the NYPD.

Daniel Libretti, a firefighter and part-time pastry chef, worked in some of the best restaurants in New York City before his death on September 11.

Daniel T. Suhr, the first firefighter to be killed at ground zero after being struck by a jumper.

John M. Moran, a man with “movie-star looks,” who had just begun his career as an attorney before making his final sacrifice that day.

Today’s teens may be more money-wise than you think