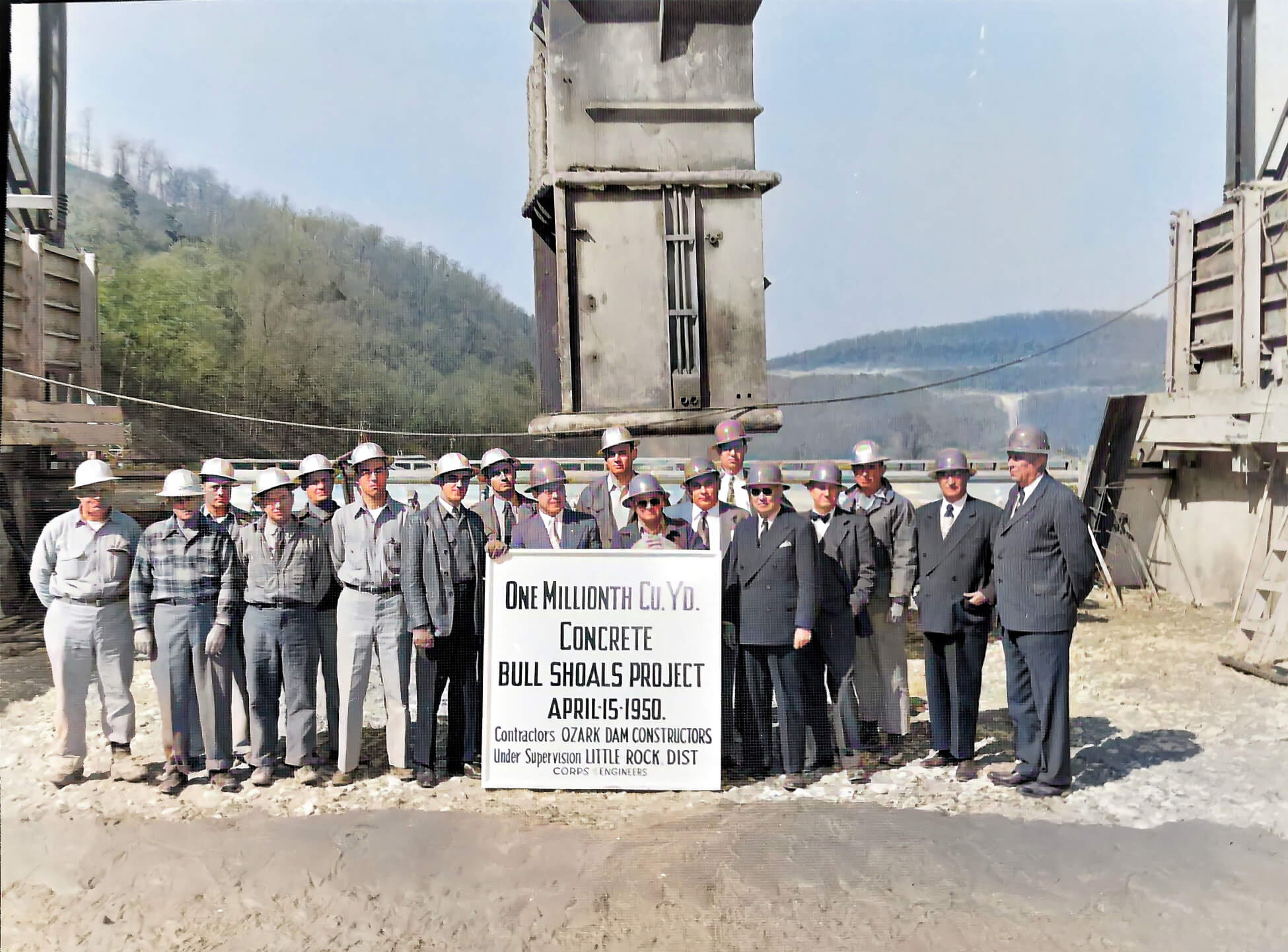 Our Buried Past: The Bull Shoals Photo Restoration Project

Editor’s Note: This article contains a derogatory racial slur in regards to the name of a cemetery belonging to a colony of freed slaves. The use of this word is used in a purely historical context and does not reflect the views of the author or those working on the Bull Shoals Photo Restoration Project. The 1950s was a different era, and history should not be covered up or changed to meet today’s moral standards.

Historian Vincent Anderson wowed a packed room at the Baxter County Library Wednesday afternoon while giving his “Our Buried Past” presentation on the library’s Bull Shoals Photo Restoration Project.

He also presented photos of the various family cemeteries that the U.S. Army Corps of Engineers meticulously moved in the lead-up to the creation of the dam and Bull Shoals Lake.

“The Bull Shoals Photo Restoration Project is not only about building the Bull Shoals Dam,” said Vincent Anderson, historian for the Baxter County Library. “It’s about rediscovering snapshots in time of the Ozarks. We chose ‘Our Buried Past Revealed’ to be our mission in our discovery. Our mission has four goals: People, nature, artifacts and structure, and cemeteries.”

Anderson’s search for the photos of the creation of the Bull Shoals Dam can be traced back to a trip to Bull Shoals Lake in 2014 with the Best Master’s Fisherman’s Wives.

During the visit to the lake, a member woman in the group remarked on the “natural beauty” of the artificial lake. The remark stayed with Anderson, prompting him to reach out to the U.S. Army Corps of Engineers in Little Rock, Arkansas, in the hopes of finding the negatives and photos of all of the work that went into the production of Bull Shoals Lake.

During their phone call, the corps told Anderson that they did not know the location of the photos but would begin to look for them. The hunt for the pictures would continue for seven years.

“I get a phone call a little over a year ago, and voila!” Anderson said.

Thanks to experimental software from a company in Europe, each photo is going through the painstaking process of being colorized. Anderson and his team of volunteers are also reprocessing each negative and are working to clean up artifacts in the photo.

Some photos have received water damage over the years.

“The Ozarks was going through a transformation process,” Anderson said. “At that time, bluffs and hills were being carved, large swaths of trees were being cut, and ultimately, we were preparing to inundate a large portion of the White River Valley. Ultimately, with these photographs, we have the opportunity to witness the transformation of the jewel itself, the White River, along with its small tributaries. We often forget the geography below the lake, and these photos retrieve echoes of times past.”

The project also features 74-year-old images of former cemeteries that were moved during the creation of Bull Shoals Lake. Anderson said the cemetery photos were one of the main draws in finding the photos.

These former cemeteries range from:

The moving of these cemeteries to new locations was meticulous and was overseen by various cemetery boards responsible for cataloging each body and headstone. The U.S. Army Corps of Engineers took great care to reconstruct each cemetery in the same manner in which they were first created.

One example of the cemeteries’ care comes from the Noe family cemetery, which featured a stone wall to keep out grazing cattle from Dr. Noe’s farm. After moving the cemetery from the Noe farm, engineers fully reconstructed the cemetery’s stone wall. Dr. Noe and his family date back to 1862, and their cemetery can still be visited today at Promise Land Bible Church.

The only exception to the careful moving of cemeteries was with the area’s “Negro Cemetery,” which did not receive a cemetery board and was not moved during the lake’s creation.

The cemetery belonged to a colony of freed black families who fled the area after a law allowing freed slaves to be resold into slavery was passed in 1860.

“These cemeteries represent families and communities in the Ozarks all the way back to the 1820s,” Anderson said. “As we begin to study these former cemeteries and grave sites, our understanding of Ozark burial customs and how we are connected to the Upper Cumberland region in Tennessee becomes clearer. These stones begin to scream out that we are all immigrants from former times.”

Construction of the Bull Shoals Dam came about after the flood of 1927, which almost submerged Cotter’s railway bridge underwater. The flood came after a heavy drought in 1915, which saw the White River lower to about one foot in depth.

The large fluctuations of the White River prompted the area residents to seek the creation of Bull Shoals Lake and Norfork Lake. In 1938 and 1941, Congress passed two versions of the Flood Control Act, funding the creation of the lakes and the dams.

Together, both dams cost $100 million to create. The project was overseen by Lieutenant Colonel Arthur W. Starkey of the U.S. Army Corps of engineers. President Harry S. Truman officially christened the dams on July 2, 1952.

Bull Shoals Dam was put under construction in 1947 and completed in November 1951. The concrete for the dam was created with rock aggregate from Lee Mountain, which was transported over a 7-mile-long conveyor belt to the dam’s worksite. Lee Mountain rests just west of Flippin, Arkansas.

At the time, Bull Shoals Dam was the eighth largest concrete dam in the world and contained roughly 2,100,000 cubic yards of concrete. The dam sits at 283 feet high and is 2,256 feet long.

“If it wasn’t for the generosity, the participation, and the relationship [with everyone who assisted the project], we would never have come this far,” Anderson said. “I am very grateful for that.”

Haying your pasture with an eye for wildlife