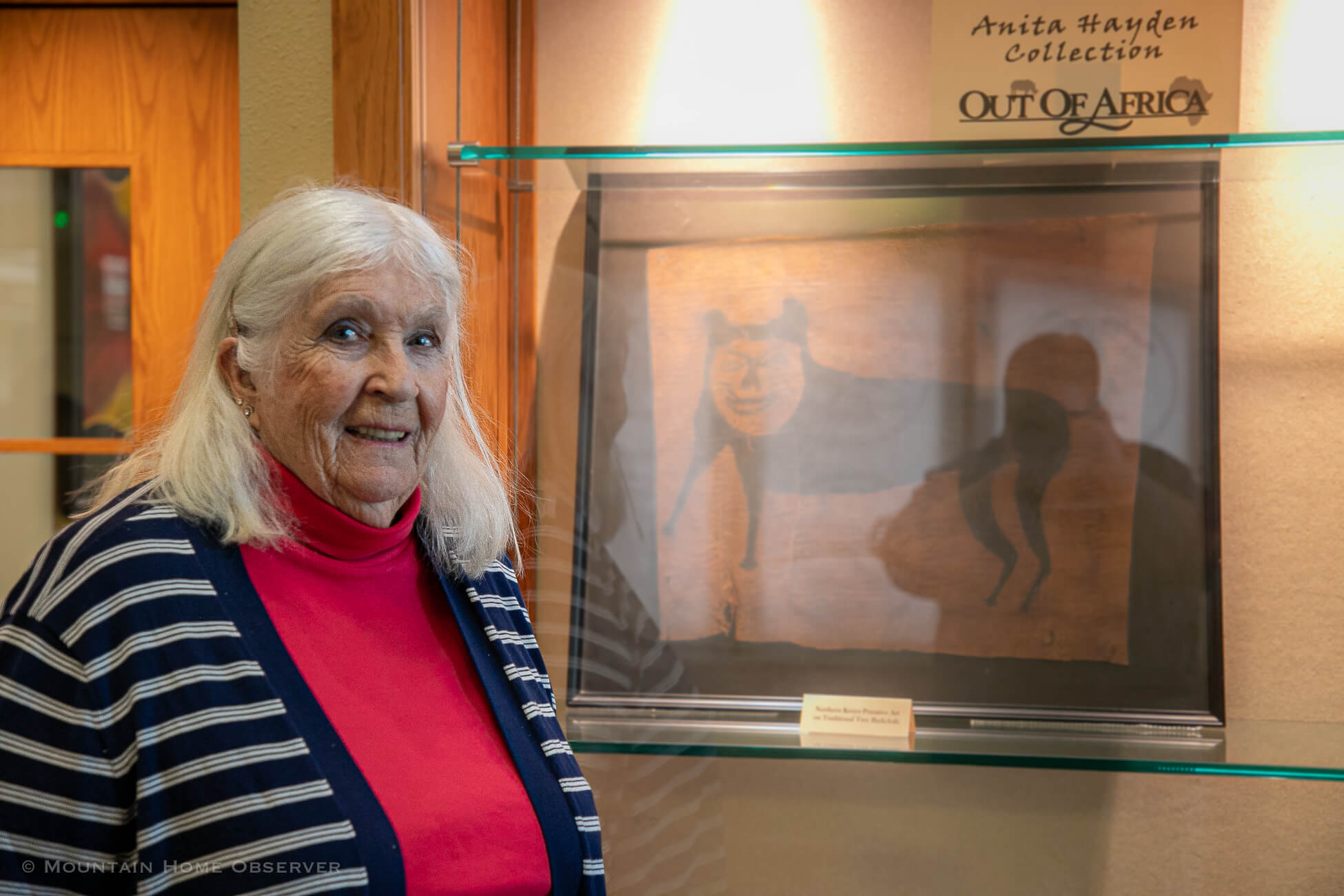 Out of Africa: The amazing life of Anita Hayden

Anita Hayden has lived a life.

As a young British educator in Eastern Africa, she experienced both the best and worst of the continent that birthed humanity.

While in Africa, she stood in the ruins of Zimbabwe, climbed Mount Kilimanjaro, survived sickness and disease, and witnessed firsthand the disparity between the white European ruling class that struggled to maintain its control over its African citizens during the lead up to the end of apartheid.

And now, in her retirement years, she’s sharing her memories and the treasures she brought back from her five years in Africa to Mountain Home through the “Out of Africa” exhibit at the Donald W. Reynolds Library Serving Baxter County.

The exhibit features Arusha hair picks and spear from the Maasai Tribe, Tanzania, a Gnu Tail fly swatter from Nairobi, Kenya, and more.

“It was one of the most worthwhile things I have ever done,” said Anita Hayden about her time teaching in Africa. “It was life-changing, and we all feel the same. We had some reunions, and it just changed everybody’s lives. It was just so important to each of us.”

The road to Tanzania

Hayden’s road to Africa began with her dislike of British weather.

Despising the cold and the rain, Hayden worked hard while attending Alcester Grammar School and Durham University and began applying for teaching positions in other countries with the warmer weather that suited her so well.

She applied to locations like Hong Kong, Singapore, and Jamaica before finally deciding to accept an offer to teach chemistry and biology at the African Girls Junior Boarding school in Machame, Tanzania, in 1962. The school was a joint effort between Teachers for East Africa (TEA), the British government, and the newly formed Tanzania government.

“It was Tanganyika when I went out there,” Hayden said. “At the end of my first year, it became Tanzania because Tanganyika and Zanzibar merged to become Tanzania. It was fantastic. I taught all African girls from all different tribes. It was a boarding school. They all spoke like three languages.”

Hayden said that life in Machame was wonderful, offering her fresh new experiences and opportunities to travel to several other countries in Africa.

During the workweek, she would spend her days setting up a chemistry and biology program for her students to learn while ensuring that her girls completed their homework and chores during the night before the school turned off the electricity for the evening.

Nestled in the Tanzanian historic area in the northern Hai District, some 6,000 feet up in the foothills of Mount Kilimanjaro, the school built by the Swedish government as a gift to Tanzania offered the same education to students as what they could get in England.

However, Hayden noted that poverty was still an issue facing the school’s students.

“I would be on dinner duty, and the girls would be picking grubs out and lining them up on the side of their plate, but they still ate the rest of it,” Hayden said. “In their dormitories, the girls had pit latrines. They didn’t have flush ones. They had no hot water, but I think they did have some primitive showers.”

Teachers’ living conditions were slightly better than that of the students at the boarding school, with each teacher receiving government housing and a Volkswagen to ride around town in.

Hayden also received a “house boy,” who was responsible for cleaning her home and making trips to the market for fresh meat and food. During her stay, Hayden ate a diet of mostly fresh vegetables and fruit, with the occasional bit of meat mixed in.

“We had a house boy who cooked, cleaned, and looked after us,” Hayden said. “I also had a gardener. And if you wanted to eat meat, you couldn’t go to a butcher shop. Even in the big city there weren’t butcher shops. What they did at Machame – out in the open, there would be this big cement circle. They would bring a beef animal, and the Muslim Imam would slaughter it on his slab in the Muslim way.”

While teaching at the school, Hayden was chosen to lead the East African Girls Outward Bound course in Kenya. The course, which lasted around three weeks, saw Hayden and her students learning about flowers, butterflies, rock climbing, repelling, and more.

The course ended with a climb to the top of Mount Kilimanjaro, which sits at a staggering 18,640 feet above sea level.

“The day we summited, we had a blizzard, and there was about a foot of snow, maybe two feet, because it was really hard to walk up to the highest point because the snow was so deep,” Hayden said. “When we got up there, you couldn’t see anything because of the blizzard. We couldn’t walk around the crater, which is what you usually do when you go to the highest points.”

Being a teacher often left Hayden and her friends with free time on their hands. While an average week could see Hayden eating at a restaurant in town before grocery shopping or dancing an evening with students, she would often get the chance to break out and visit unique locals and shops.

She participated in trips to countries like Uganda and Rwanda, often visiting little towns and camping overnight in game parks.  She even saw the Mbozi meteorite.

Each trip took her to more shops and locations, allowing her to accrue the collection of African items that are now on display in Baxter County.

“There would be shops in these little towns,” Hayden said. “The bigger towns had a lot of tourist stuff, but I didn’t like it because it was all the same. So, I would poke around in the stores until I found something neat — that was different. And sometimes people would just sell stuff on the side of the road.”

One of her most notable trips took her to Rhodesia, which was just beginning to enter the Second Chimurenga, or the Rhodesian Bush War.

The trip, which took place over her longest vacation, was supposed to end in South Africa. Gasoline rationing caused by an oil embargo to end apartheid prevented Hayden and her fellow teachers from reaching their final destination.

While there, Hayden visited several of Rhodesia’s cities and the ruins of Zimbabwe, from which Zimbabwe would get its name after the collapse of Rhodesia in 1979.

Still, Hayden said the trip was an eye-opening experience that juxtaposed the magnificence of the European cities built in Rhodesia against the cruel and racist treatment of the Africans that lived there.

Sadly, Hayden’s time in Machame would eventually end as her career as a teacher took her to Korogwe, a smaller town in the Tanga district on Tanzania.

Hayden said that her time in Korogwe was hard, as the living conditions were more primitive and the heat from the region became almost unbearable.

“The heat was indescribable,” Hayden said. “I hated it there. It was horrible.”

While in Korogwe, Hayden was responsible for preparing students for a Cambridge-level exam and teaching them to dissect a fish.

She said the fish dissection required the draining of an entire pond to get the fish needed for the exam.

“So, I spent the day in the hot sun while these priestesses drained this pond and put Talapia in buckets for me,” Hayden said.

Hayden’s time in Korogwe, and Africa, would end shortly after that day after Hayden became severely ill with an unknown sickness. Running a 105-degree fever while being covered in boils, she was transported to Tanga to receive better treatment than Korogwe’s little hospital could provide her.

It would be here that Hayden would decide to return to England after recovering.

After returning to the UK for three months, Hayden packed her bags and headed for the United States, where she would take a new job in Dallas, Texas, as a research technician before moving to Mountain Home to work at Baxter Labs.

Hayden said her trip to the U.S. was slightly humorous, as her employer applied her for a full green card instead of a two-year visa. While flying over New York City, the captain of her plane rewarded her new status by flying around the Statue of Liberty.

Hayden continues to live in Mountain Home to this day.

“I had to go to the American Embassy and have a physical and be interviewed and all of this stuff,” Hayden said. “And the American government paid for us to fly over. When I was on the plane, the pilot said, ‘Since you’re all new immigrants, I’m going to fly you around the Statue of Liberty, so get a good look at it.’ Now, I hadn’t intended to immigrate. I don’t know how it happened, but I got my green card immediately. It worked out good in the end.”

Hayden’s exhibit will be on display until March 31. For more information, please contact the Baxter County Library at 870-580-0987.