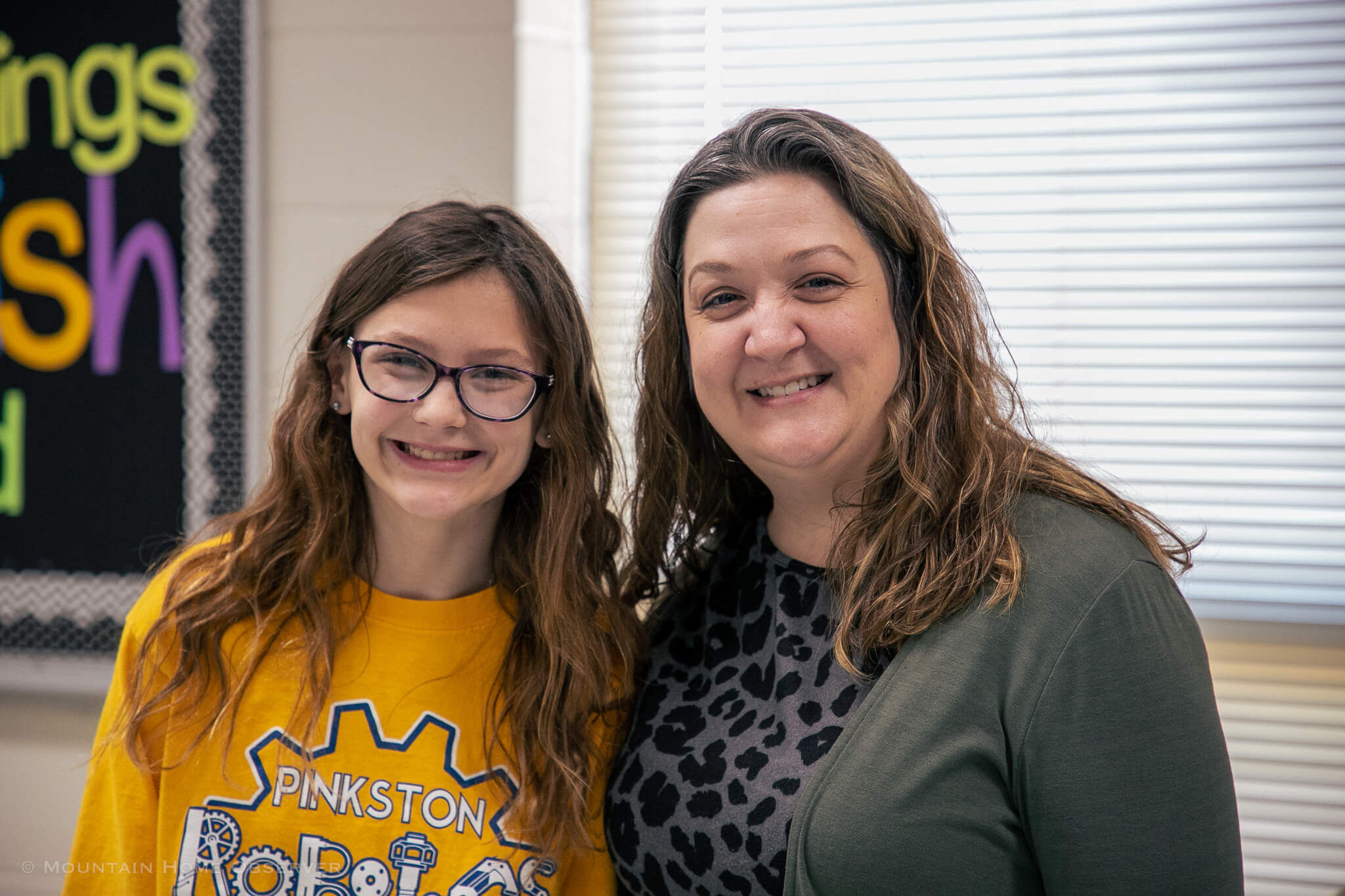 Students across all of the various schools in the district keep building robots to compete in various tournaments and competitions around the country, and even the world.

Most recently, Mountain Home High School’s “Bomb Squad” wrapped up their latest competition in Orlando, Florida, just weeks after unveiling their new robot in front of an excited crowd at ASU-Mountain Home.

But where does this passion come from?

For many students, it starts with Chrissy Davis and her robotics class at Pinkston Middle School.

“This is my fourth year doing Pinkston Robotics, but I’ve been doing FIRST for almost 10 years,” said Chrissy Davis, robotics coach for Pinkston Middle School. “They do it for a semester and I have four classes. Two, seventh grade. Two, sixth grade.”

Davis created Pinkston’s robotics course three years ago after the school asked if any teacher would be interested in putting together a Lego team for the FIRST Lego League for Pinkston Middle School.

“That year, we ended up winning third place and went to Australia,” Davis said.

Davis first introduction to robotics began with her son, Eric Davis, during the fourth grade. Davis describes her son as “not a sit-down, be quiet, kind of a kid,” who struggled to find a place while attending school here in Mountain Home.

He would find his place after entering a FIRST program, which would open up the world of engineering and robotics to him. He is now seeking a degree in engineering as a college student.

“I saw the power of having him in a FIRST program,” Davis said. “They’re learning, they’re growing and they’re researching. It kind of brings them out of their shell. It teaches them how to talk to judges. So, after seeing the power of what it could do for him and give him a place, he’s now looking at getting his engineering degree. Had he not had these programs, he wouldn’t have ever found his place.”

Nestled in the back of the winding hallways of Pinkston Middle School, Davis’s classroom does not look like a typical middle school classroom.

Robots line the tables inside the classroom, while students break off into groups as they pour over their computers. The students are currently working on getting a “Spiro” ball through mazes using math and computer coding.

The small balls zig zag across the tables, which have been covered with a maze pattern, as students attempt to figure out how to get the Spiro balls to move in through the maze.

In the back of the room sits a larger table that is filled with more advanced robots belonging to Pinkston Robotics, the school’s FIRST Lego League team.

“The best part is helping and meeting new people,” said Trinity Fenner, a student in Davis’s robotics class. “I also really like driving the robots. I want to be a mechanical engineer when I grow up. Because that sounds cool.”

During the class, students are graded on their ability to problem solve and on how they work together in their groups.

Classroom sizes run around 10 or so students per class, across sixth and seventh grade. While many of the students in Davis’s class signed up for the course, some students are placed in the program randomly.

If students wish to take the robotics program further, they can sign up to be a part of Pinkston Robotics, which meets twice a week after school at 5:30 p.m. Students can become eligible for several scholarships through participation with the robotics team.

“There are scholarships available,” Davis said. “But also, you get these kids that come out with, like my son, having Baxter Lab employees completely teaching him everything that they know at high school levels.”

While joining the robotics team is free, parents may be asked to help cover a portion of the cost of travel if the team makes it into a tournament.

The team raised over $20,000 to be able to compete in Australia several years ago.

“I’ve had three teams,” Davis said. “My previous teams went to California twice, so we had to raise money to get them out there. For Australia, we raised about $20,000 in about two months. So, we were able to get them and their parents there.”

Davis said her robotics classroom and team were gateways for students to join some of the bigger robotics programs in Mountain Home like the Bomb Squad.

Formed in 2000, FRC Team 16 or the “Bomb Squad” is Mountain Home’s first ever FIRST team and is the school district’s premier robotics team, that helped opened the door to the FIRST Lego League for the district’s other teams, like Pinkston Robotics.

While the Bomb Squad might be in their future, Davis’s team is currently focused on finding problems in the shipping industry, while providing a solution to that problem at the same time. The team has won two awards for their work so far this year.

“This year’s theme was ‘Cargo Connect,’” Davis said. “We’re still in the middle of the season, and they have to find a problem in shipping and delivery, and then find a solution for it. That’s what they won two awards for. They won one at regionals and then they won the same award at state.”

Dave Says: I’m not doing that