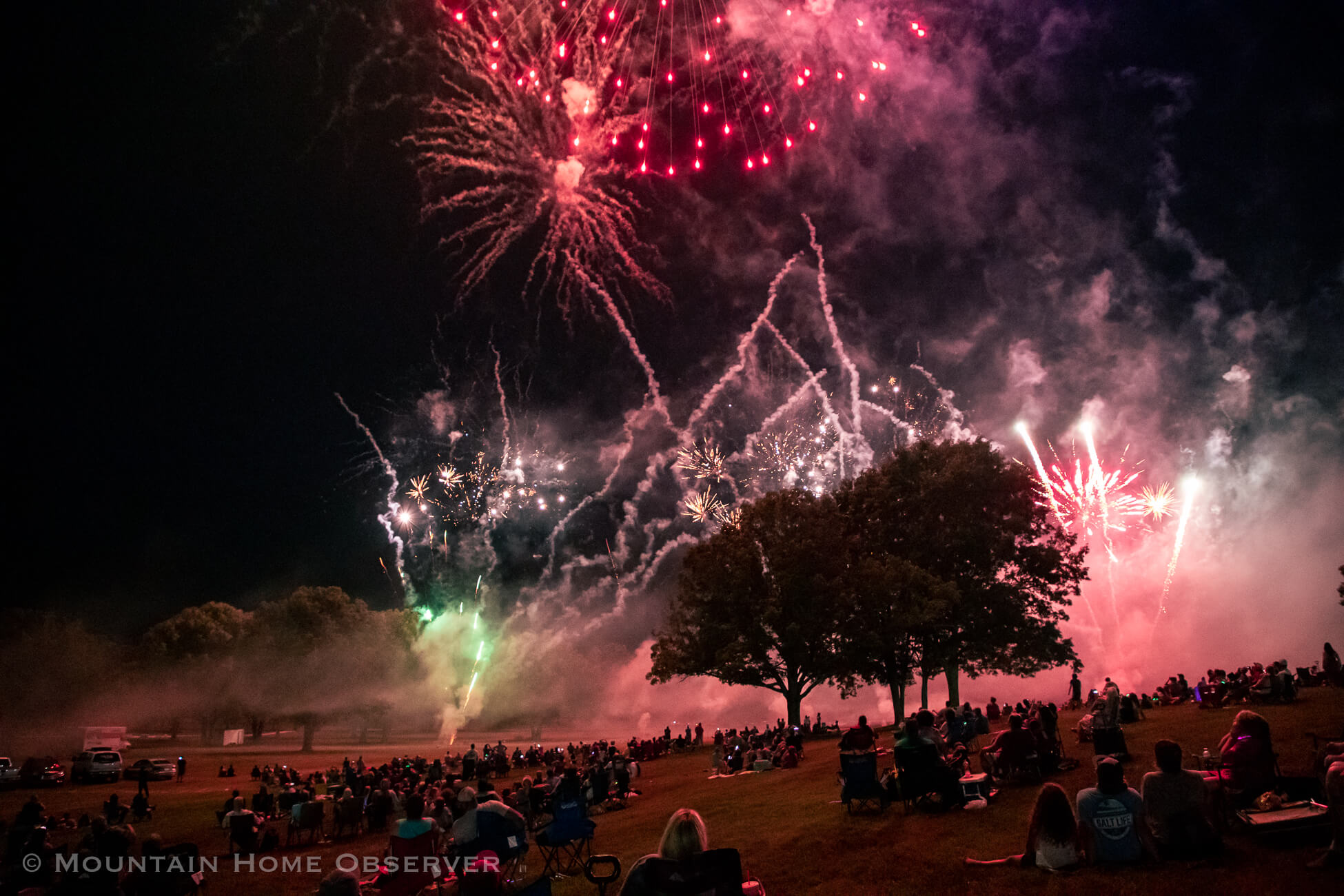 The heat may have driven turnout lower during the day, but attendance kicked up during the evening hours as the sun began to set, with a full crowd settling in for the festival’s nighttime fireworks show.

This year’s fireworks display was held in honor of Randy Keller of AM Pyrotechnics, who passed away last year after spending 24 years overseeing and designing Mountain Home’s firework show.

“This festival, for 21 years, was run solely by volunteers, and everything you see tonight is all from you guys. It’s all from the community and your donations,” said Dani Pugsley, president of the Mountain Home Area Chamber of Commerce.

The  Red White & Blue Festival was born in 1999 after a discussion between Pat Ballard and his son and daughter-in-law. Ballard, who has a license for fireworks, reached out to Galaxy Fireworks for the festival’s display the first year.

The festival was a smashing success. It was so successful that state police told Ballard that he couldn’t host the exhibition again because of traffic concerns.

To keep the event going, Arkansas State University – Mountain Home, under the leadership of former chancellor Ed Coulter, offered its campus to the festival committee, where it has been hosted since.

The Red White & Blue Festival was put on hold for the first time in 2020 after the outbreak of COVID-19 but made a roaring comeback in 2021 with a free concert by Lonestar.

Following the 2021 celebration, Ballard said he would be looking to let others lead the festival he and others worked to create for Mountain Home and its community.

This summer’s festivities opened on Friday with the opening of the Red White & Blue Festival’s first beer garden and the Ultimate Auto Group Jeep Night kick-off.

Music for Friday night was performed by Marybeth Byrd, a finalist from season 17 of The Voice.

Back in 2019, Byrd made the top 8 semifinals on S17 of NBC’s The Voice with the help of her coach, John Legend, and mentors: Usher and Taylor Swift. In 2021, she received Young Artist of the Year from the Arkansas Country Music Awards.

Since then, Byrd has been performing at various venues near and far, hosting an afternoon radio show, teaching vocal lessons, volunteering for the community, making dozens of appearances, and working on original music. Ha Ha Tonka followed Byrd’s performance on stage.

The Red White & Blue Festival’s annual rodeo also returned with some impressive displays of horsemanship and a packed crowd for both evenings during the festival.

Saturday’s festivities saw Paul Giggloti kick off the annual 5k race for the Red White & Blue Festival, with runners giving it their all in the early morning heat.

The 5k race was followed by the annual Red White & Blue Festival Parade, which was moved to Saturday this year due to the weekend’s extreme heat forecasts. The parade featured a decent crowd and several burnouts from this year’s competitors in the festival’s car show, which had an impressive display of classic cars, trucks, and modern sports cars.

Vendors and the bounce castle for children opened at noon on Saturday for families braving the heat.

The evening concluded with the last night of the rodeo before guests settled in to watch the festival’s famous fireworks show, which ran for about 30 minutes before ending.