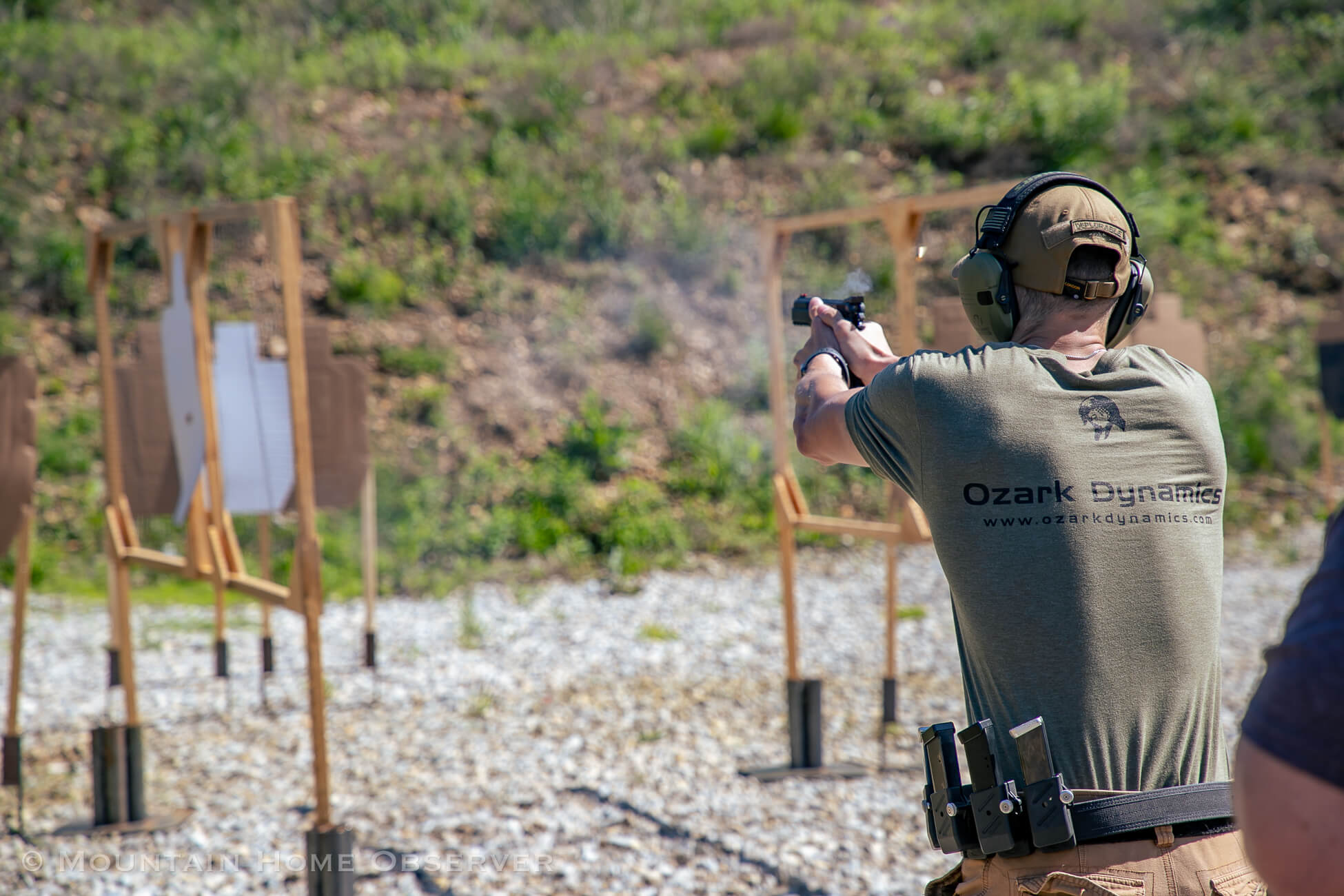 Shooters from all over the area came out with friends and families to put their skills to the test on one of the three courses set up by Dirk Waldrop, owner of Ozark Dynamics, and his crew of nationally certified shooters.

“USPSA was this Saturday, and then next Saturday is concealed carry. I do it on the second Saturday of each month,” said Dirk Waldrop. “After that, its defensive shotgun, women’s handgun, self-defense fundamentals, and then it starts over with USPSA.”

The training center and range were started in late 2020 after Waldrop, who retired from the U.S. Army after 25 years of service, took up part-time work at White River Firearms to stay busy in his new life as a stay-at-home dad.

“I was a stay-at-home dad,” Waldrop said. “The kids needed me, and it was one of the reasons that I retired after 25 years. See that white tower? White River Firearms is right up there by the tower in Midway. I’m friends with the owner, and he got me about two years ago. He said, man, are you interested in working a day or two a week part-time? And I got my concealed carry instructor certification.”

After receiving his certification, Waldrop began teaching classes, which quickly filled with shooters from the area looking to learn how to conceal carry.

After filling classes for a few months, Waldrop decided to expand his offers by creating his gun range.

“I’d have 15-20 people [at a time]. I mean, it was just constant.” Waldrop said. “And so, after a few months of that, we decided it was time to expand and offer more stuff. I was infantry, and then we got into the practical shooting, and we’d been doing it at the gun club for years. And I said, man, let’s move all that stuff here. There are less restrictions; we can do what we want and take it in the direction we want it to go.”

With a new direction in mind, Waldrop began looking for the perfect property to establish his new business on. He said the search was difficult, as many of the properties he looked at required more work to set up than he could afford.

Luckily, Waldrop decided to take a drive down Tucker Cemetery Road one day and found what he was looking for with a stroke of luck.

“I had never been down Tucker Cemetery Road since I’ve been here,” Waldrop said. “I don’t know what made me do it. I was leaving the gun shop and cut through, and I saw land for sale down the road. I drove up, and when I made the corner, I was like, Woah. There it is.”

After securing the property, both Waldrop and his wife went to work on transforming it into a full gun range.

Today, Ozark Dynamics boasts a 2,000-square-foot building that features office space for Waldrop and his instructors and a full classroom featuring video/audio capabilities. The space also features a meeting room and a workshop. The building also boasts both indoor and outdoor restrooms for shooters that are ADA compliant.

Waldrop said the building would eventually feature a bar.

Outside, Ozark Dynamics has a three-lane gun range for shooters to use both pistols, rifles, and shotguns on. Each range is 25-yard-deep by 20-yard-wide, allowing shooters to practice shooting from the 25-yard line. A longer 400-yard rifle range is in the works, and Waldrop said he plans to add an archery range after the rifle range is completed.

The range also boasts one outdoor pavilion on range two and an outdoor cooking area. Additional pavilions are in the process of being built, though the weather has delayed some construction.

“I’m not going to put restrictions on, like no rifles on the pistol range,” Waldrop said. “You’re shooting paper targets, and if you’re going to shoot the berm, shoot the berm. I don’t care. That’s what it’s there for. I got 20 acres of dirt.”

Ozark Dynamics offers a wide variety of training courses to residents in both Missouri and Arkansas. While their most popular class is their concealed carry class, which can certify students in both states and their women’s handgun class, several courses can ramp up in both difficulty and speed.

Waldrop and his instructors, who are all certified instructors and competitive USPCA shooters, focus on teaching shooters to be defensive and to use an Intuitive Defensive Shooting (IDS) program that allows shooters to perform under stress by using techniques that rely on biomechanics to get the job done.

IDS includes skills like the balance of speed and precision with a handgun, the critical incident reload, defensive accuracy / defensive efficiency, volume of fire and the body’s natural reactions during a dynamic critical incident.

Ozark Dynamics instructors are also certified range instructors, and Waldrop himself boasts a number of NRA certifications and the ability to certify U.S. Concealed Carry Association instructors in-house. He has also teamed up with AirEvac Lifeteam to provide medical training to his staff, which are all certified in CPR/AED and Stop the Bleed.

Waldrop also keeps a certified EMT on hand for large events if an accident occurs.

“I got four other guys that I can use to teach different classes,” Waldrop said. “Competitive shooting, shotguns, and stuff like that… the cool thing is that amongst the 10 of us, there’s an auto mechanic, there’s a master carpenter, there’s a welder. I mean, these guys can do a little bit of everything, and we built this ourselves.”

Ozark Dynamics currently offers Level 1 USPSA matches on the first Saturday of the month and is working on expanding to level 2 matches next year and introducing some three-gun matches.

To prepare for those level 2 matches, Waldrop will have to expand his range to include additional bays that feature 35-yard lines.

Competitions officially start at 10 a.m. on the first Saturday of the month, with the safety brief being held at 9:30 a.m. Costs to compete range from $15 for one USPSA match to $20 for the full two matches.

In 1976 an international group of enthusiasts interested in what had become known as “practical” shooting met in Columbia, Missouri. From that meeting came the International Practical Shooting Confederation (IPSC). In 1984 USPSA was incorporated as the US Region of IPSC. Membership in USPSA automatically includes membership in IPSC.

For 20 years, the USPSA competition has provided a testbed for equipment and techniques, which are now the standard for police and military training. Some of USPSA’s top competitors are regularly employed as trainers for elite police and military units. Today, USPSA matches are conducted every week by nearly 400 affiliated clubs all over the United States.

If you would like to register for a class with Waldrop and his staff, please visit Ozark Dynamics here.