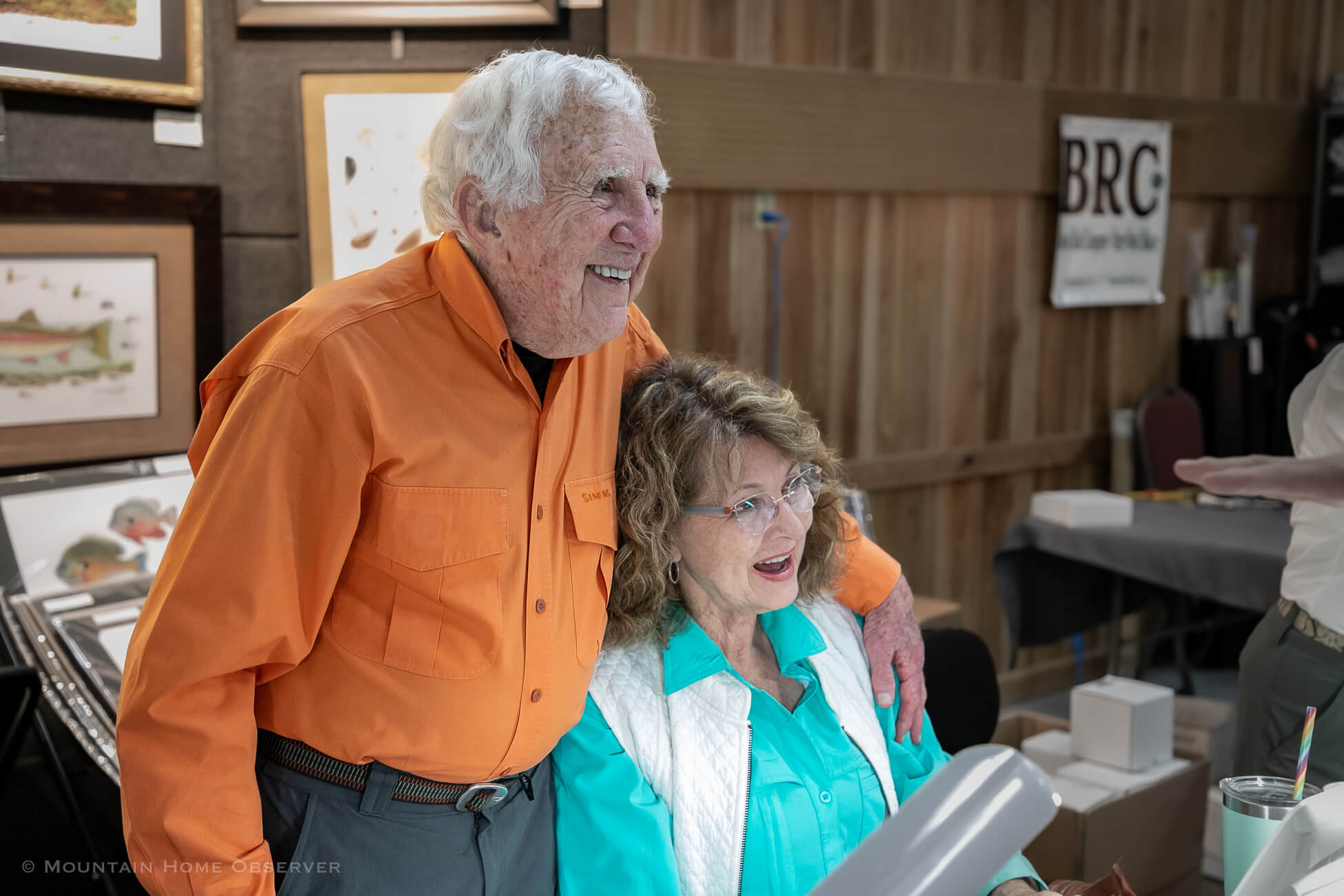 Sowbug Roundup: The greatest of all time, Dave Whitlock

Hundreds of visitors from all over the country poured into Mountain Home to have a chance to visit with their fellow fly tyers while also getting some solid fishing advice from expert fishermen like John Berry, Lori Sloas, Duane Hada, and Steve Blumeich.

“I discovered fly fishing with my granddad when I was eight years old,” said Dave Whitlock on his discovery of fly fishing as a child. “We were looking through the pages of this catalog. We were living in Oklahoma. We were blue-collar workers. So, I opened the page of this catalog, and there was this rod laying across it. It was a yellow, gold-colored rod. It had red wrappings on it and a little reel on its back.”

That picture of a rod in the catalog was paired with examples of hooks and lures that boasted bright colors and feathers. The catalog, Whitlock said, blew his mind.

Whitlock’s discovery of fly fishing in that catalog all of those years ago sparked a passion in Whitlock that would forever change the course of his life.

As Whitlock reached adulthood, his passion persisted, prompting him to seek knowledge of the sport and eventually leave his job in petroleum production research to pursue a career as a full-time professional fly fisherman.

“I knew if I was going to be able to be successful at this new job of being a professional fly fisherman, I wasn’t going to get it done in Oklahoma,” Whitlock said. “I asked a close friend of mine who owned a fly shop in California about it. I said, Virginia, I’m thinking about moving to Montana to become a professional fly fisherman. And she said, ‘Dave, don’t do that because you’re a southern boy, and that’s north.’”

Whitlock took his friend’s advice and moved to Mountain Home, where he would reside for over 40 years before moving back to Oklahoma. Along the way, Whitlock met his Emily, and the two would marry while also becoming an unstoppable duo in the world of fly fishing.

Together, the Whitlocks have accomplished a lot. With the help of his wife, Whitlock built a career that allowed him to regularly appear in many fly-fishing and sports publications such as Fly Fisherman Magazine, Fly Fishing, and Tying Journal, Trout Magazine.

Whitlock co-authored or contributed to many other books throughout his career, including The Flytyer’s Almanac, Second Flytyer’s Almanac, Art Flick’s Master Fly Tying Guide, McClane’s Fishing Encyclopedia, Migel’s Stream Conservation Book, and Masters on the Nymph.

He has also been the recipient of many awards for his fly-fishing and fly-tying contributions, including induction into the National Fresh Water Hall of Fame, the Trout Hall of Fame, Max Ander’s Wild Trout Award for his work on the propagation of wild trout, and the Federation of Fly Fishers’ Conservation Man of the Year Award. Whitlock was also inducted into the Arkansas Game & Fish Hall of Fame and was given the Lifetime Contribution Award from the National American Fly Tackle Trade Association.

He is considered one of the fathers and greatest pioneers of warm water fly fishing. He is also known for having made a painting or two.

“I lived up here for 40 years, and it was one of the best things that anybody ever advised me to do,” Whitlock said. “It became my home, and I love it here. I still do. I am so glad that I can become a part of this.”

Both Dave and Emily Whitlock have played a large role in keeping Arkansas’s riverways and creeks clean and pristine.

In the Mountain Home area, the Whitlocks helped develop Dry Creek Run, one of the area’s best fishing spots. This year, NAFF is establishing an endowment in honor of Whitlock to provide funding for future improvements and maintenance of Dry Creek Run.

The Whitlocks also took part in preventing the destruction of Crooked Creek, which is considered one of the best smallmouth bass fishing streams in the nation.

In the early 2000s, several mining companies mined the popular fishing creek and removed trees and vegetation from the area while also building new embankments in the creek.

The creek was eventually considered impaired by the Arkansas Department of Environmental Quality because of excessive water temperature. The removal of trees reduced the shade along the creek, and in-stream mining made the stream bed more shallow, heating the water up faster.

After witnessing the damage for themselves, the Whitlocks and the Friends of the North Fork and White Rivers Inc. took political actions and were able to stop the mining of Crooked Creek.

“Flyfishers are a stream and rivers best friend,” said Emily Whitlock. “Because you guys probably know more about what’s going on with a stream anyways. Unless there happens to be a biologist or someone studying that section. If you are used to fishing in areas, and every year you get a certain catch at a certain time and all of a sudden it’s not there, you know something bad has happened.”

Throughout his presentation, Whitlock taught the crowd at the Sowbug Roundup about fish types in the local area and how to catch them. He also advised on prime fishing spots and the best equipment to use throughout the year to be successful.

He ended his presentation with a demonstration at McCabe Park of his new casting technique for those who have arthritis or limited mobility.

“It’s one of the most beautiful and easy ways to cast, and the first thing I asked myself is why in the hell did I not think of that before,” Whitlock said.

Photo Gallery from the 2022 Sowbug Roundup

Building a Culture of Reading