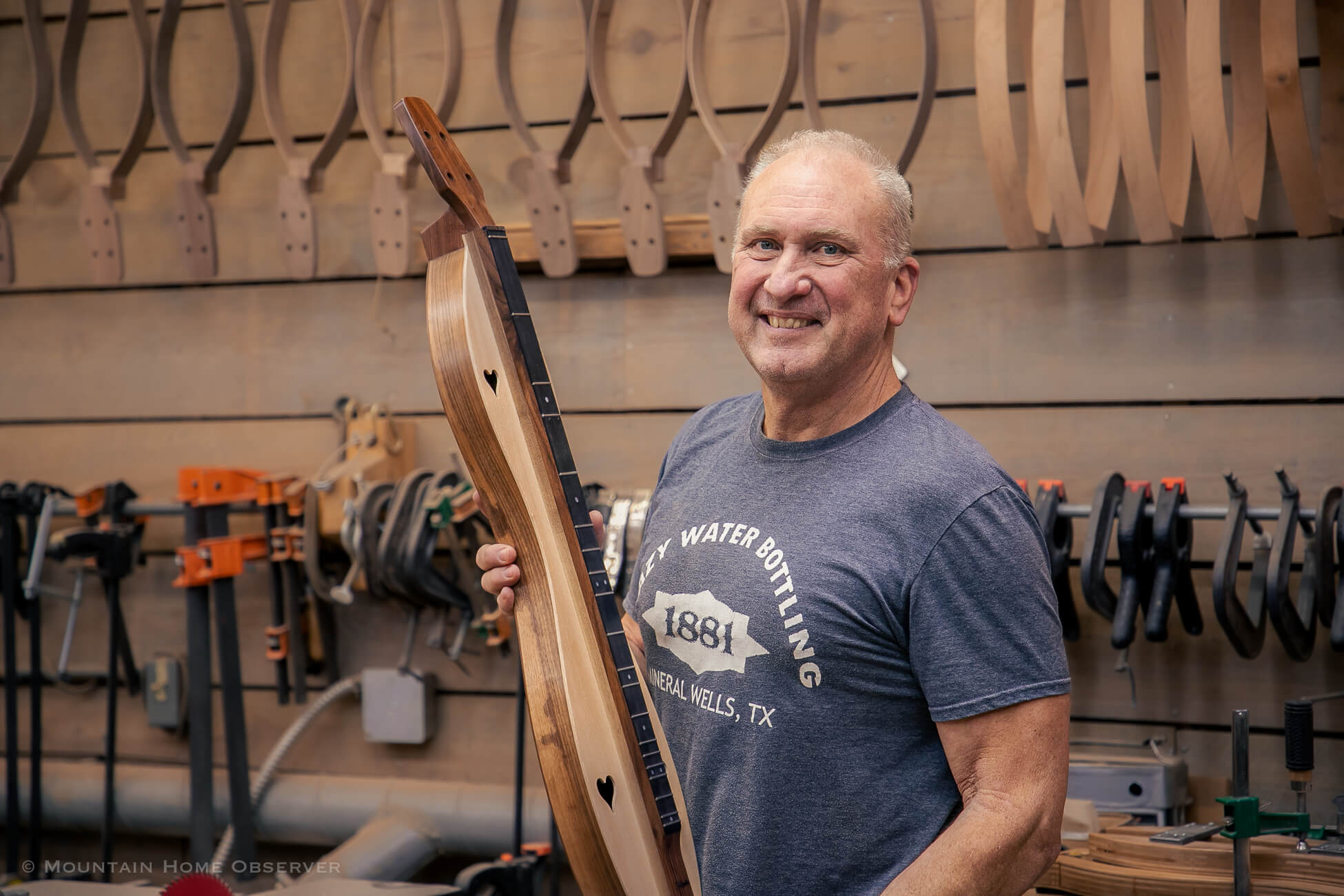 The Dulcimer Shoppe: How one Nebraskan farmer left his old life behind to build the Ozarks’ greatest instrument

If you were to stop random people on the streets of the small city landscapes that dot the Ozarks’ wild forests and roaring rivers and ask how those people came to live in the Ozarks, you’d get a thousand different answers.

For some, the answer is easy. They and their families have always been here, forging a life for themselves in what used to be a wild country.

For others, the answer will be a job, the scenery, or even the fishing. Many will say that they moved to the area to get lost and start their lives over again.

For Tim Grothen, the answer for moving to the Ozarks is a little different.

That answer is the McSpadden Mountain Dulcimer.

“I love the simplicity of the instrument,” said Tim Grothen, owner of McSpadden Mountain Dulcimer and The Dulcimer Shoppe. “How you can get complex chords and songs out a simple instrument. You can enjoy the instrument at any skill level you put into it.”

Born and raised in Hastings, Nebraska, to a well-established farming family, Grothen has spent most of his life tending fields and growing crops alongside his father and uncle.

His life would change in 1982 when he was introduced to his first mountain dulcimer at a gift shop in Colorado. It was love at first sound.

“I saw one at a tourist shop in Estes Park, Colorado,” Grothen said. “I said, ‘that’s the instrument for me.’”

The Appalachian dulcimer, or mountain dulcimer, is a fretted string instrument of the zither family, typically with three or four strings, originally played in the Appalachian region of the United States. The body extends the length of the fingerboard, and its fretting is generally diatonic.

The instrument first appeared in the early 19th century among Scotch-Irish immigrant communities in the Appalachian Mountains.

Extensive research has traced the instrument’s development through several distinct periods and likely origins in similar European instruments: the Swedish hummel, the Norwegian langeleik, the German scheitholt, and the French épinette des Vosges.

David Schnaufer, an adjunct associate professor at Vanderbilt University who wrote a paper on the history of the mountain dulcimer, wrote:

“The Appalachian dulcimer was forged in the melting pot of the wagon roads and river routes of the frontier. The Scots and Irish settlers could hear the drone of the pipes in this sturdy and easily constructed zither, and the English found it to be an appropriate accompaniment to their ballads and laments. They reduced the number of strings to just three or four, as wire was a precious commodity in the wilderness, and added a raised fingerboard to allow the playing of quick jigs and reels with a plectrum. By reducing the strings, the instrument became more adaptable to more types of music within this theater. Unlike other instruments that have a distinct evolution to their present form, the dulcimer is still being reinvented all the time. The shapes and sounds vary widely throughout the region.”

As Grothen learned the mountain dulcimer in Nebraska, he gravitated towards the McSpadden brand.

The company, which is known for producing some of the best mountain dulcimers globally, was formed in 1962 by Lynn McSpadden after he was introduced to the instrument by his roommate in seminary school. With the help of his father, McSpadden was able to set up a system that allowed his small company in Mountain View, Arkansas, to make up to 2,000 dulcimers each year.

The brand’s quality became so well known that it created a lifelong fan base composed of players like Grothen, who solely play McSpadden dulcimers.

The McSpadden family would sell the business to Jim and Betty Woods in 2001.

“Twenty years ago, when the McSpadden factory sold from Lynn McSpadden to Jim Woods, I saw the advertisement and thought that would have been a fun career change at that point in time,” Grothen said.

Yet, Grothen passed on the opportunity in 2001 to buy the brand and The Dulcimer Shoppe, and instead chose to stay in Nebraska for the sake of his three young children.

Yet, the thought of building dulcimers for a living stuck with Grothen, who finally got a second chance to follow his life dream again in 2019.

“I saw a Facebook post from McSpadden Dulcimers, and it said the dulcimer shop is up for sale again,” Grothen said. “I think it took me five minutes to compose a short email back saying, give me some approximate terms. What can we do with it? And there was a quick response back. And within about a month, I made a trip down here to lay eyes on it.”

Grothen pulled the trigger and sold his farm to become the new owner of McSpadden Mountain Dulcimer and The Dulcimer Shoppe at age 59.

The decision shocked members of his family and community in Nebraska.

“It’s surprising how little I miss the old ways,” Grothen said. “I love this. I told a lot of people, I’m moving to Arkansas, and they said, ‘you can’t move down there. You’re a farmer. You’re big in your church. You’re big in your community. You’ve got lots of family here. You’re Mr. Hastings Nebraska.’ And then I said, ‘I’m going to go build dulcimers,’ and everybody said that would be the only thing they could ever see me leaving this community for.”

After arriving in Arkansas, Grothen had to quickly learn how to build the very instruments that he loved from the ground up.

Thankfully, his life as a farmer had taught him how to work with wood and machinery, making the transition somewhat smoother. He was also blessed with the great staff at The Dulcimer Shoppe and guidance from former owner Jim Woods.

“Everybody here has taken me under their wing. They’ve just been really good to me,” Grothen said.

And they have good reason to be. Many of the McSpadden crew have been working at the factory for decades, and they are fiercely loyal to the brand and the family itself.

Workers like Duane Porterfield, who serves as an ambassador for the brand, as well as one of its most experienced artisans.

And DeWayne Jolly, another long-time worker with over eight years under his belt, who gracefully puts together dulcimers in the front while lifelong friends and neighbors Richard Stoltz and Randy Sloan finish making parts in the back while arguing over who stole whose pencil back in the second grade.

Together, the shop boasts over 100 years of knowledge on how to create the popular instrument.

“I’m kind of retired,” said Duane Porterfield, the self-described ambassador for McSpadden dulcimers. “So, I work here when I feel like it. He lets me come back and play with them. I’m the ambassador.”

The Dulcimer Shoppe offers a variety of choices when it comes to dulcimers, ranging from affordable beginner dulcimers to more expensive ones made out of exotic woods. The business also sells its products globally and features a storefront in Mountain View for guests to try their hand at playing the mountain dulcimer.

Guests can also watch the factory’s craftsman put together new dulcimers thanks to a large viewing window at The Dulcimer Shoppe. The factory currently produces between 10-12 dulcimers a week.

The high points of low water