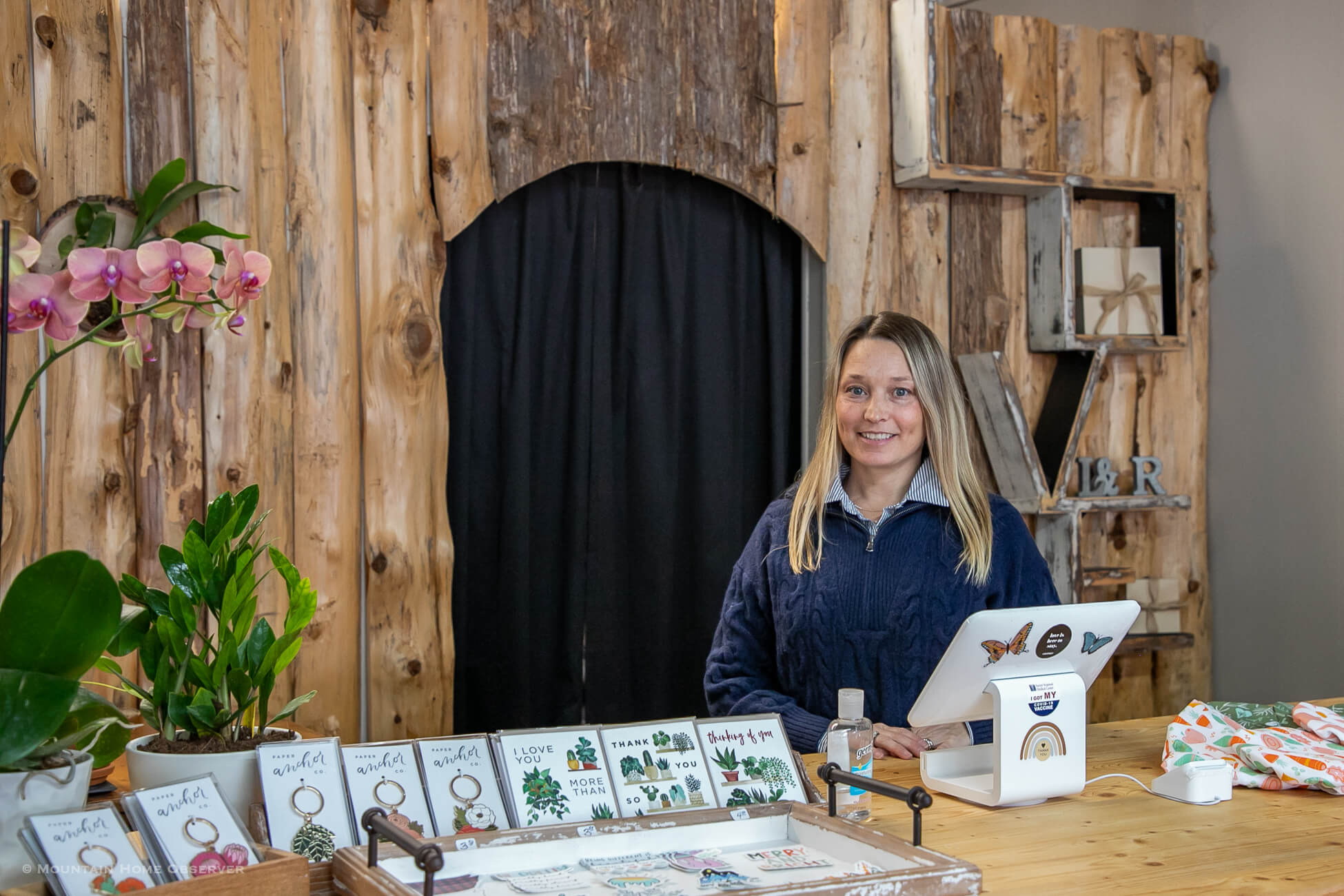 Gabrielle Slaughter’s favorite pair of clothing is her beaver-lined boots.

The dark, fur-lined boots represent a special time in Slaughter’s life while working at Well Heeled, a high-end boutique in Stowe, Vermont.

They were that one pair of boots she worked for—the ones she saved and saved to be able to afford.

And more importantly, they were the very pair of boots she was wearing while teaching her children how to tell their lefts from their rights.

“My boots are one of the purchases I made while working at Well Heeled,” said Gabrielle Slaughter. “I coveted and worked very hard for them. My kids were little when I got them, and I named them Larry and Roy for left and right to help the kids learn.”

The boots and nicknames would follow Slaughter as she and her family moved from Vermont to Colorado before finally settling in Mountain Home, where she would open her own high-end boutique bearing the name of her two children, Louie and Roy, a play on her boots, Larry and Roy.

“My daughter’s name is Louie,” Slaughter said while referencing the boots on her feet. “My son’s name is a part of the business too. We were joking that we needed a name for the business and I threw out that I had worked really hard for this. I guess we could call it Louie and Roy, and my daughter was like, ‘no, they’re Larry and Roy mom.’ In a nutshell, the store is literally named after a pair of beaver boots.”

Hailing from New England, Slaughter spent much of her life in Vermont working for boutiques and companies like Well Heeled, In Company, and American Stitchco, before moving to Mountain Home eight years ago to be closer to family.

Her husband, Michael Slaughter, spent his time in the snow, riding snowboards professionally and teaching others how to ride the waves of snow-covered mountains.

He now serves as Canada’s half-pipe team coach for the Olympic Games.

“He pounded nails locally around here and worked for some different builders,” Slaughter said. “It’s a winter sport, so you really don’t have a year-round job until you reach the Olympic level, which is where he is at now. He learned all of these different trades throughout the years. He did that for three years, and then through the desire and love of the sport and passion, he got the job.”

After getting settled in Arkansas, Slaughter opened up her high-end boutique in 2018.

Drawing inspiration from her Vermont-based mentors, Lisa Haggerty, owner of Well Heeled, and Devon Williams, owner of In Company, Louie and Roy focuses on bringing fashion and styles from places like Aspen, Colorado, and Stowe, Vermont.

“I’m not very brandy,” Slaughter said. “I tend to be more style and quality. I think I’m starting to get to be known as a store that sells quality. My prices are a little more expensive on some things, but that’s because you’re buying something that’s probably been sustainably made or the fabrics are organic, and you can tell the quality.”

With the help of her daughter and her husband, who built her stores counters and displays, the business was a success at its first location next to Dairy Queen in Mountain Home.

After a year and a half of a steady business, Slaughter’s family store would come grinding to a halt after the initial outbreak of COVID-19 and the lockdowns that followed.

Unsure of what to do next, Slaughter made the tough decision to shut down Louie and Roy.

“It was a really great location to open,” she said. “But with COVID hitting, it was hard to maintain because my sales literally came to a halt. And I was a new business. I didn’t have gobs of money to sustain it. We were putting kids in college. So, we closed. I literally closed the doors and sold everything I could and kind of sulked for a month.”

Slaughter’s sulking did not last for long. She and her husband decided to look for a smaller location to finish selling their remaining inventory.

They looked all over town before finally finding their home next to Cove Coffee on Baker’s Street.

“I was stoked, because of course, being next to a coffee shop is ideal,” Slaughter said. “My husband and I came in here every single day to get it into a position that it looked good enough. I love the floors. We brought them back. It was just covered in paint and dirt.”

Within a few months of her original closing, Slaughter celebrated the reopening of her store and its new location on Mother’s Day in 2020.

Slaughter turned to consignment to get her inventory back up, allowing her loyal customers to bring back their previously bought outfits in favor of getting new ones to make up for lost time and her depleted inventory.

Her consignment plan worked, putting Louie and Roy back on track and ready to face 2021, which would be Slaughter’s most profitable year since opening.

“Through my month of sulking, I had realized that a lot of people were cleaning out their closets,” Slaughter said. “I’ve always been a big believer in recycled fashion, being that my basis is sustainability for my business model. And so, I opened the store with consignment, and I had a lot of loyal customers bring me clothes from their closet that I was able to consign and get my business up and going.”

Louie and Roy features organic, sustainable women’s clothing from mom-and-pop style stores all over the country and local artists and designers like Eric Smeltzer.

High end jewelry and handbags are also available to shoppers, along with a large selection of gifts in the boutique’s new gift section.

“It was so nice and refreshing to kind of travel around and find a place that’s done cool,” said Sara Krafft, a longtime customer at Louie and Roy. “The owners are awesome. Her kids and husband that comes into work, are awesome. And the clothes have a wide enough range. She doesn’t carry so many of them that you see everyone wandering around in the same thing, and they’re just good quality clothes.”