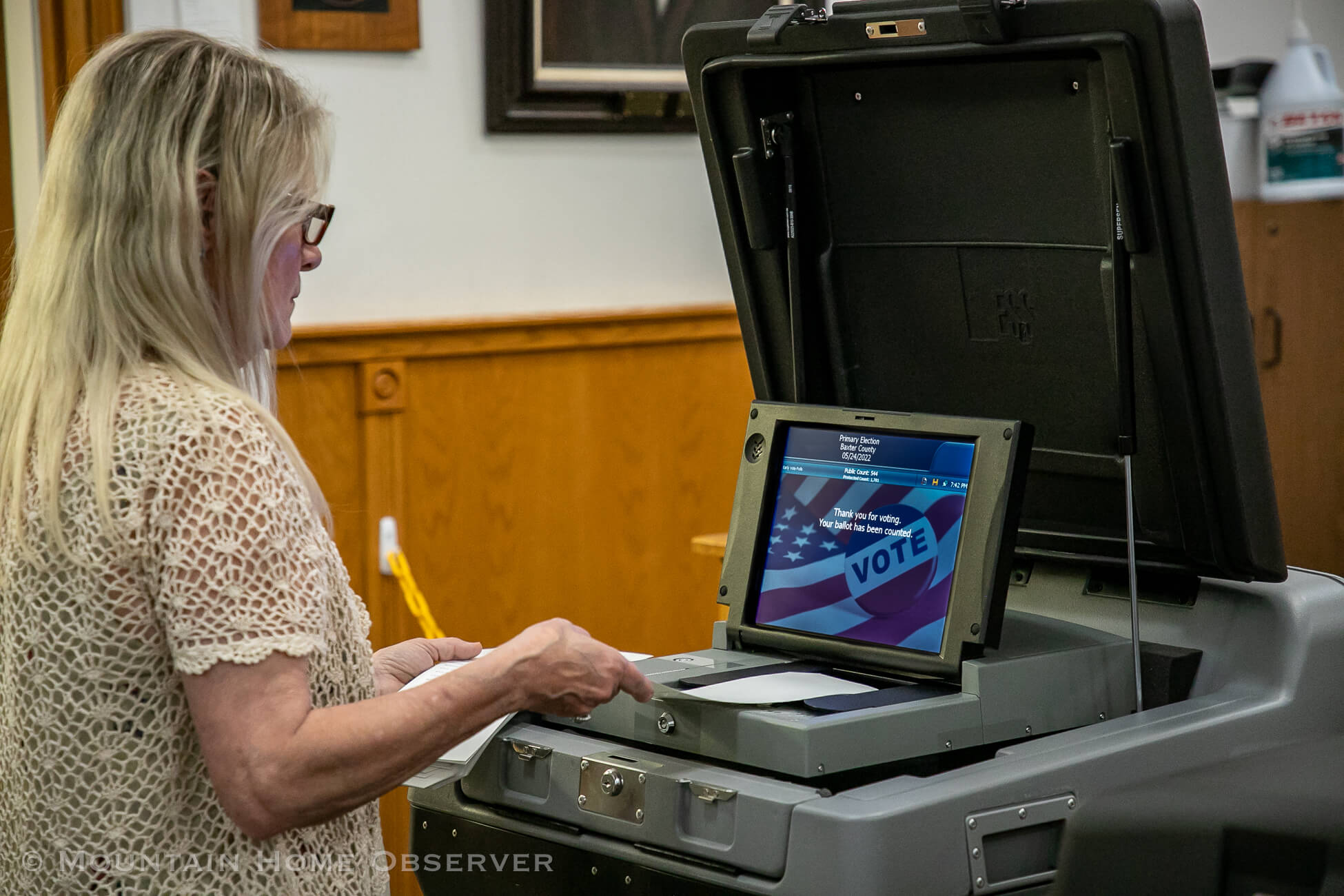 Editors Note: This story has been updated on May 24 with new information after new documentation was filed with the Baxter County clerk’s office. The original story ran on Monday May 23, reporting 13% voter turn out. This has also been updated to reflect new information.

Candidates for Baxter County Judge and Sheriff, among others, were required to file their pre-election campaign reports with the County Clerk’s office by May 17. The report is designed to inform the public the details of contributions and expenditures for each candidate.

Kevin Litty leads the way in campaign contributions with $33,450 reported from January to May of this year. Filings show virtually all of his contributions were over $50 and individually reported, as required by law.

“I never dreamed I’d get that kind of money,” said Litty. “When I started, I said I’d be happy with ten thousand, and everybody that knew anything about it said, ‘you need more than ten thousand.’”

Campaign contribution limits for a contributor this year are $2,900 per candidate, per election, set by the Arkansas Ethics Commission. Litty reported three contributors that gave the maximum allowed. Ten other contributors gave anywhere between $1,000 to $2,750.

Eric Payne, who is the only other Judge candidate that filed a timely report, raised $4,925. About half of Payne’s contributions came from a single contributor. Payne reported a total of seven individual contributors that gave more than $50.

Shannon Feliccia also missed the original reporting deadline but filed campaign documentation on May 24, election day. He reported $5,700 of total contributions across five contributors, and $7,420.90 in expenditures.

Plumlee stated that he would file his report with Canda Reese, Baxter County Clerk, as soon as possible and had misunderstood the requirements and deadlines to report.

In Arkansas, county candidates that are opposed and have received contributions or made expenditures in excess of more than $500 are required to file a pre-election campaign report with the county clerk’s office. The payment of the filing fee via a candidate’s own personal funds should not be considered as either a contribution or expenditure.

Sheriff John Montgomery raised a healthy $18,720, with two contributors giving the maximum allowed, and two others giving between $1,000 to $1,250.

Sheriff Montgomery reported a total of 45 individual contributors that gave over $50. Contributions under $50 are not required to be reported.

John Pate did not raise any money and has said on the airways at KTLO that he was not accepting contributions. Filings show that Pate used $8,794 of his own money for his campaign.

“I have funded my entire campaign myself. Why is that important? Because for every person that puts a dollar into a candidate’s pocket, you as an elected official owe that person a favor. I do not take donations from anybody,” said Pate in an interview on KTLO.

Henry Campfield failed to file a pre-election report and a statement of financial interest to the County Clerk. Campfield told the Observer he raised $8,500, with some of that being his own personal funds. He also stated he had about three contributors.

If either primary election for County Judge or Sheriff results in a runoff, candidates involved are required to file their next contribution and expenditure reports on June 14. Runoff elections, if required, would be on June 21.

Get out the vote or ‘GOTV’ efforts continued through the weekend with both Litty and Payne making their final campaign appearances at Norfork’s Pioneer Days this past Saturday.

Plumlee’s limited campaign contributions when stacked next to Litty is made up for in an aggressive ground game this past weekend in Baxter County.

“We’re going door to door, I’ve got about ten people helping me”, said Plumlee. “I’m a regular person, I hang out with regular people. If elected, I will do everything I can to make Baxter County a better place.”

Feliccia, who works for the county’s road and bridge department, had to put his campaign hat the side this past weekend and focus on his shop. He stated he had electrical work to do all weekend.

Feliccia said he couldn’t put ‘5,000 signs all over the county’ but believes he has the most experience.

“Research all four candidates. Do your homework. Because I think if they’ll research the four of us, I’ll be the one who has the most experience,” said Feliccia. “I’m more than a sign.”

“Do research before you go vote. Kevin Litty’s the best man for the job,” said Litty.

“Be informed when you make your vote. Elections have consequences,” said Payne.

Sheriff John Montgomery is flooding the radio waves with ads to get people to the polls.

“I think there’s some confusion that people think ‘well, I’ll wait until November to vote because this is just a primary’ and so we’re trying to educate the voters through political ads and through face to face–and social media,” said Sheriff Montgomery.

Current voting totals as of Monday evening May 23 were 4,920 ballots cast. There are 29,477 registered voters in Baxter County.

“The primary election is going to virtually decide all of the county races. Now, I realize that’s not quite true, but close, and so it’s very important that people come out and vote in the primary,” said Sheriff Montgomery.

Races for the office of County Sheriff and County Judge have no Democrat Party opposition, meaning the winner of this year’s Primary Election will decide the fate of the offices sought.

If you did not vote at all in the primary but want to vote in a runoff, you can choose either partisan ballot, provided there are races for either.

Voting in either partisan primary is not a declaration of party affiliation.

Runoff elections occur when a candidate does not receive a majority of the votes cast– over 50 percent.

Primary Election day is tomorrow, May 24. Voters may cast their ballots tomorrow from 7:30 a.m. to 7:30 p.m. at any of the following Vote Centers:

Bar None Cowboy Church to host BBQ event for veterans