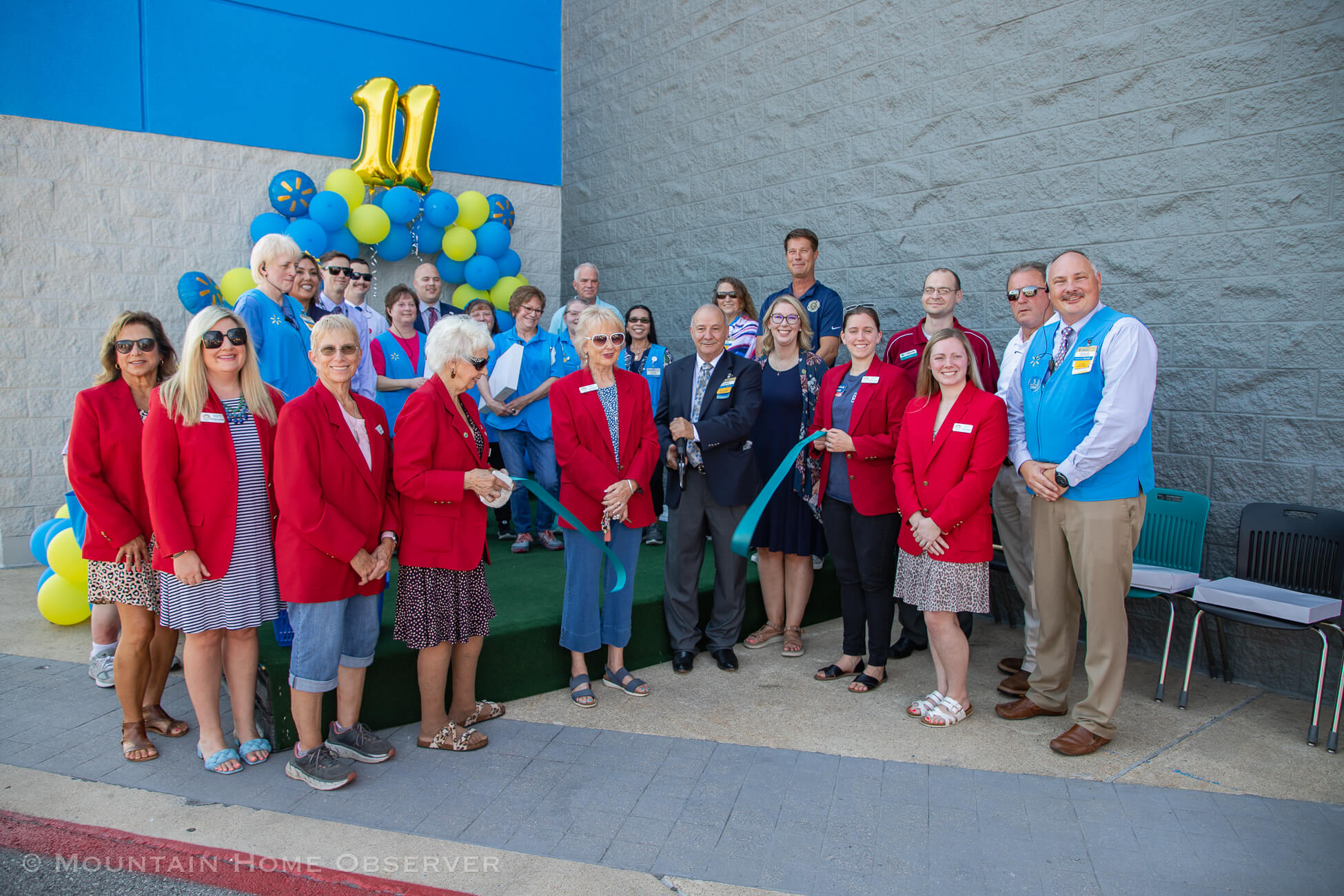 The crew at Mountain Home’s local Walmart store 11 invited members of the community to celebrate the completion of its nearly six month long renovation with a ribbon cutting ceremony put on by the Mountain Home Chamber of Commerce.

“This was a six month project and I have folks asking what it’s like to do a remodel of this magnitude,” said Doug Richard, store manager of Mountain Home’s Walmart. “My best example to give them was, imagine remodeling your house and inviting every one of your family members over to stay with you every single day. Imagine that. You’re moving the kitchen to the living room, the living room to the kitchen. That is the best way I can give an example.”

After the ceremony Richard invited attendees inside to cool off and grab a slice of cake.

Walmart first came to Mountain Home nearly 54 years ago, becoming a staple of the community while attracting businesses to build around its location.

During its tenure in Mountain Home, Walmart went through three other locations before settling into its current location after it bought the property from the Woods family 20 years ago.

Walmart store 11 boasts a 200,000 square foot building, making it one of the largest stores in the state. With its 20th anniversary approaching, Walmart decided it was time to renovate its aging building and bring it up to modern standards.

For six months, construction crews have worked to install a new $700,000 floor inside the store. The new floor requires less maintenance and allows Walmart staff to skip the bi-yearly waxing and stripping that the old floor required to be maintained.

Walmart also invested $600,000 into a new fleet of shopping carts for the new store.

“We also have new shopping carts,” Richard said. “The shopping carts are great. They actually got a cup holder. They’ve got a place for your phone, and they roll straight as an arrow.”

As the renovation progressed, the store tackled a major project in its deli section, replacing the backsplash and installing high definition TV monitors to display the deli’s menu.

The store also installed a new fleet of self-checkout displays and added several new checks out lanes for those wanting assistance from a cashier. The front of the store was also improved, with the Vision Center getting a full makeover.

Sunglasses are now available for purchase at the Vision Center.

New signage was also added throughout the store, and aisles were widened to allow better navigation while shopping. Metal rollers were also installed on shelves with heavy items, like dog food bags, to allow them to be moved to the front more easily for customers.

Restrooms inside Walmart store 11 were also remodeled for the first time in the store’s 20-year history.

A new state of the art sound system has also been installed, giving a more well-rounded notification system throughout the store.

“There won’t be any highs or lows through the store,” Richard said.

Lastly, Walmart added a new addition to its building by creating an ‘OPD center’ for its online orders.

Online orders at Walmart and other grocery stores across the country have become extremely popular following the COVID-19 pandemic but have put a strain on workers as they attempt to fulfill orders.

The new OPD center now gives Walmart employees a warehouse solely dedicated to sorting online shopping orders, as well as an additional 39 stalls for customers to park in while waiting for their order to be brought to their vehicles.

The total cost of the entire renovation and expansion is in the seven figures range, though a final number was not known at the time of writing.

“That’s going to be a huge part of where customers go,” Richard said. “Because we were fighting in the middle of the store when we had the temporary setup. Now we got a lot more room. I know all the folks from out of town with boats and trailers, they can actually pull all the way through. We can load them up a lot easier.”

Each employee had been employed with Walmart for over 30 years, with Laddy Light having served the longest with a 42-year career.

Richard closed out the ceremony with the Walmart cheer before donating funds to the Baxter County Sheriff’s Office, Junior Auxiliary, FBNCA, and the Mountain Home Chamber of Commerce. Each check was between $1,000 to $2,500.